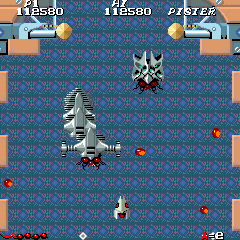 Released just a year after Darwin 4078, Super Real Darwin doesn’t really change up a whole lot. Many of the evolutionary forms here are brand new, though a few (like Black Deame) reappear. There are a few additions, though. New are DNA power-ups, which don’t have an immediate effect, but instead will automatically evolve your ship a certain number of levels after death and respawn. There are also speed and shield power-ups, though these float in an odd pattern and are difficult to catch.

Each defeated boss will also drop an egg, creating a clone of your ship that floats next to you and evolves on its own. It’s awkward to use effectively, especially since it can be killed so easily, but when treated correctly it can almost double your firepower. Certain enemies also drop black Evol capsules, that can mutate your ship into a specific form, based on where you are on the evolutionary chain. These are some weird ships, like the Pispider, which drops eggs around the screen, and Pisnake, which is like a mini-dragon. 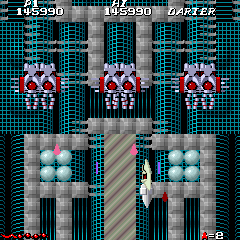 The visual design has been given an overhaul so the graphics are a little bit more varied and less abstract… but it’s still a pretty weird game. The third level takes place entirely over a series of circuit boards, with enemies taking the form of chips. The electric razor enemies are back, appearing as regular foes, plus each of the game’s ten stages also has its own unique boss. Some of these are pretty standard shoot-em-up enemies (like dragons) but there are some unique ones, like a stopwatch. It counts on its own, but if you hit one of its three buttons, it will change one of the digits. If you can get it to read “777”, it throws out power-ups until you kill it or you die.

SRD was ported to the Mega Drive by Sega under the name Darwin 4081. (The first game was 4078, SRD was 4079, and ActFancer was 4080.) It’s a solid port, with similar graphics, pillarboxed to maintain roughly the same vertical aspect ratio. The only major difference is that many of the ship forms (and their names) have been changed. It also adds a credit sequence after the final boss; there is no ending in the arcade version. The arcade version is also featured on Data East Arcade Classics for the Wii. 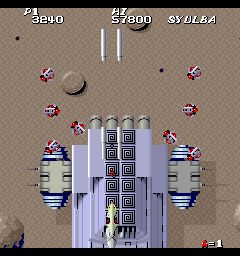 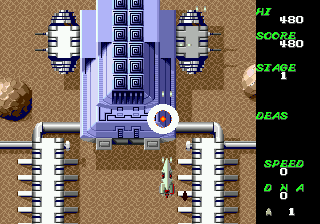