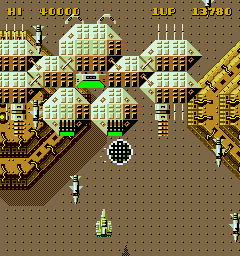 B-Wings (which stands for “Battle Wings”) is an early vertical shoot-em-up from Data East. As the title suggests, the main draw is the ability to equip your ship with a number of wings, which affect both your ship’s shape and its weapon. You begin the game unequipped, but you can find them during gameplay, and certain levels will let you select one at the start.

There are eight wings in total in the arcade version: Multi, Side, Ground, Anti, Cannon, Jump, Wide, and Barrier. Most of them fire in multiple directions – for example, the Anti weapon fires two shots forward and one backwards, while Side will fire one bullet up and two shots to the left and right. The Barrier is short range but has a thick spread that can propel enemies before they get too close. The number of weapons is mighty impressive for an arcade game from 1984. Compare this to Tehkan’s Star Force, for example, which only offered one power-up that enabled rapid fire. 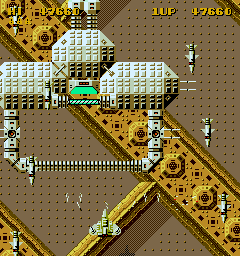 While the wing concept is a great idea, the rest of the game is a mishmash of designs that don’t really work. As with Xevious, the screen is divided into two layers, the sky and the ground. By pressing the secondary button, your ship will temporarily swoop to the ground, which is handy for dodging airborne enemy shots. However, the landscape is filled with walls and fortresses, so you really need to be careful when doing this, otherwise you’ll crash. There are also enemies that inhabit the ground layer – these are technically harmless as long as you stay in the sky, but you need to watch out for them when you swoop down. You can only fire a single shot when you dive, as well, which makes these foes difficult to hit. The Ground weapon lets you attack them with bombs, and is the only way you can easily destroy these enemies.

Complicating matters further, you can’t dive with a wing equipped. If you try, you’ll simply jettison your wing, leaving you in your default, feeble state. The wings also make your ship a larger target, and if any enemy or bullet scrapes it, it’ll become damaged and make the whole ship difficult to control unless you ditch them.

In fact, considering the wings are the game’s central feature, it seems to go out of its way to make sure you don’t get to use them. Enemy attacks are relentless, and just being able to grab the first wing in the initial stage without getting killed in the process is a minor accomplishment. The controls are also floaty, as your ship has a small sense of inertia. 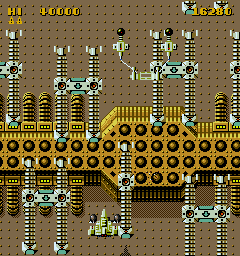 Most of the larger enemies have big, glowing weak points, either on the front or the side, and targeting these is the only way to kill them. You’ll usually need some kind of wing in order to hit them, though, as your default weapon just can’t reach the mark.

B-Wings is a bizarre looking game. Most of the levels have a dim, golden brown color palette, which changes slightly through the areas. More disconcerting is how angular everything looks – even the round objects have 45 degree angles, which give the enemies, particularly the multi-segmented bosses, a particularly robotic look. It’s not an attractive game, but it is a unique one, and one that gives the impression that you’re fighting a frighteningly foreign menace.

B-Wings was ported to the Famicom in 1986. It’s not a direct port, but rather a heavily revamped (and improved) take on the same concept. The manual adds a brief backstory, too, giving the name FX-1 to your ship, as it fights against the evil Gobunasu. 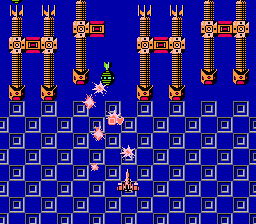 The biggest change is the addition of several extra wings: Hammer, Dyna, and Fire. There are also three secret wings found throughout the stages: SS (Staring Silver), AH (Aurora Harrier), and OB (Oct-Blaster). Many levels, including the first, allow you to equip the wing before you even begin playing (or upon respawn). The difficulty is also much lower, so you can actually play around with the different weapons. There are also hidden items that let you pause the game and select a new wing. Further, there aren’t any enemies on the lower layer now, so there’s much more of a reason to fly down there (though you still can’t dive with a wing attached).

The Famicom port retains the bizarre visual style of the arcade version. Many of the enemies (including the bosses) are the same, but there’s a wider variety in the color scheme. The first few levels have a strange blue palette, which looks similar to Darwin 4078, which was released by Data East in the same year. The arcade version has 45 levels, while the FC version has 30. 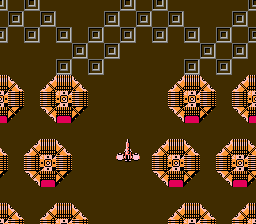 There’s also some baffling weirdness that typifies Data East titles. A few stages have spiders, frogs, and snakes as bosses, that are completely inconsistent with the rest of the game. The Cannon wing also fires a heart beam, which is weirdly cute. Also, you begin each stage (or new life) by flying directly over the status screen that shows the level number and how many lives you have left. It looks like a glitch, but it’s actually supposed to be like that! There are only a few music tracks, but what’s there is also ridiculously upbeat, and it’s better than the arcade game, which only has repetitive backgrounds noises.

Many of Data East’s early FC ports were released by Namcot, but this was the first one that they released themselves. While it was only officially published in Japan, it has some more international recognition because it was included on many pirated multi-carts. It’s a little basic, but for an early FC shooter, it’s pretty good. This is available on Windows on the Project EGG service. 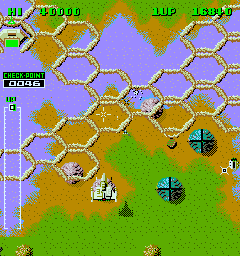 B-Wings was preceded by another shoot-em-up called Zaviga. It plays very similarly, as the ship looks almost identical. However, overall it looks and plays a little more like Xevious. Here, you can switch between both layers at will, instead of just flying above and momentarily zooming below. You also have bombs to attack ground-based enemies. The bosses are mountains that consist of multiple turrets. It feels more refined in spots than B-Wings, but it’s also missing the large weapon selection. Both games were programmed by Akira Sakuma, who worked on a number of Data East’s early shooters. 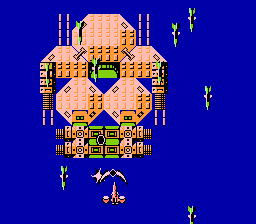