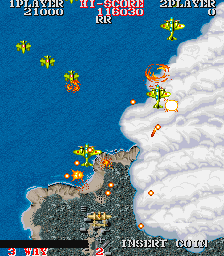 Released three years after its predecessor, 1943: The Battle of Midway is a massive improvement. It looks much nicer, has an actual soundtrack, and introduces many of the defining elements of the series.

The game begins with the enemy bombing your carrier. You manage to take off before it sinks and fly off to exact vengeance, with the ultimate goal being the destruction of the Japanese battleship Yamato. There are now sixteen levels in total, with the second half of each level comprising of a boss battle. For most of the stages, you fly lower to the ground and fight against a fleet of battleships. If you fail to take out the leader of the fleet, you must replay the segment, although if you fail twice, you’re given a pass to the next stage. In a few of the stages, you fight against a gigantic airplane instead. 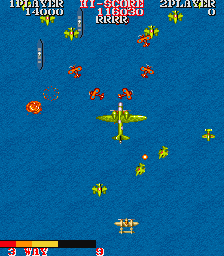 Eschewing the tradition of many Japanese shooters, you have a “health” bar, though you only have a single ship per credit. However, it drains automatically, albeit rather slowly, so in effect it’s sort of a fuel guage too. As before, detroying colored formations will drop a power-up, which can be cycled through by repeatedly shooting them, allowing you to choose which is the most appropriate. Health restoratives are the most important, especially due to your ever-decreasing health bar, but there are also plenty of new weapons.

The arsenal includes the auto gun, which is a rapid fire weapon; 3-way, a pretty standard spread gun; shotgun, which is a short range weapon that erases enemy attacks; and shell, which shoots large, explosive rounds that are good for taking out bosses. However, each weapon only lasts for thirty seconds before you revert back to your regular pea shooter. Picking up a weapon you already have equipped will add another thirty seconds to the timer. The other big new addition to your arsenal is bombs, which clear entire screen of weak enemies and heavily damage large ones. The type of bomb attack depends on what section of the level you’re in. If you are flying high in the sky, lightning will strike all enemies on screen. If you are flying low, near the ocean, a huge tsunami douses all enemies beneath it. If a bullet is about to hit you, a flash will clear the entire screen of projectiles. The downside is that using a bomb takes up a small amount of health, so strategic use of them is key. There’s also a new ranking system. When you complete a level, your performance is graded, and you get extra health if you get promoted. Obviously killing as many enemy fighters as possible will get you a higher rank, but you should also watch out for hidden cat statues that appear and randomly warp around the screen, which can reward you with lots of points. 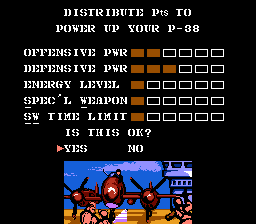 Like its predecessor, 1943 was ported to many systems. The most unique is the NES version, which adds in a feature where you can customize your plane’s statistics – at the beginning, you can allocate a certain number points to your offense, defense, energy (the size of your health bar), special weapon (which determines which weapons pop up when you shoot power-ups) and special weapon time limit (how long a special weapon lasts). You can find hidden items throughout the game which can be used to strengthen any of these after each level. There are 24 stages in total this time, as opposed to 16 in the arcade version. The port was also handled by Capcom rather than Micronics, so it’s a big step above the original’s NES port. Interestingly, the Famicom version is subtitled The Battle of Valhalla rather than The Battle of Midway, turning it from a real campaign to a fictional one.

The ZX Spectrum version is terrible. Everything is either white or light blue, putting a huge strain on the eyes, a huge downgrade from the surprisingly good port of 1942. The Amstrad CPC version once again has a really cramped screen with too much space devoted to showing player 1 and 2’s scores. While the graphics look pretty decent for a CPC game, and it runs more sprites on screen than one would be used to seeing on a CPC, the cramped screen screws it up. It’s still playable, just frustrating.

There are two ports for the Commodore 64, though only one is official. The first, released in 1987 by Swedish company Action Software, is technically called ’43: One Year After, as noted on the box cover and title screen. It was not made by Capcom or even licensed for that matter. It plays closer to 1942 and looks surprisingly decent for a rip off. Unfortunately, it also plays terribly, with two huge bars on the side of the screen, with the left side showing a map tracking your progress. A proper port was developed by Tiertex and released the next year, and while it’s better than One Year After, is still mired by plenty of issues, most notably the slow speed of your plane.

Until the Capcom Generation/Capcom Classics Collection ports years down the road, the best versions were the Amiga and Atari ST ports, which are similar to the arcade version, although not quite as detailed. There’s also a large window in the right size of the screen. Like its predecessor, it also appears on the Capcom Arcade for iOS, in essentially unplayable form due to touch screen controls. 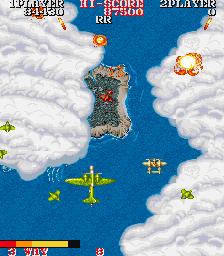 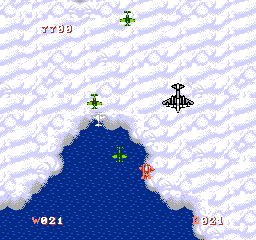 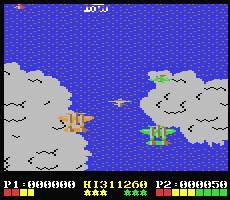 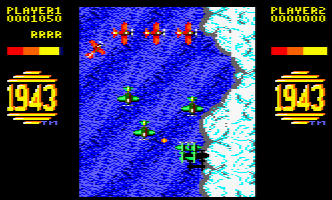 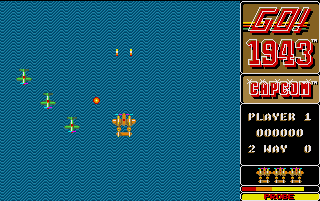 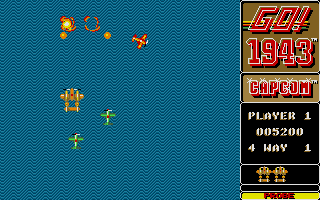 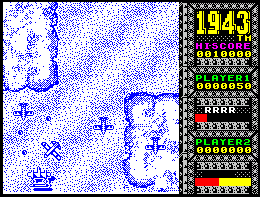 1943 Kai isn’t quite a sequel, so much as a revised update – think of it as “1943: Champion Edition”. It replaces the Super Ace with a Boeing Stearman E75, a type of biplane. In addition to some new enemies, there are also enhanced weapons, like a more powerful shotgun. There’s a brand new soundtrack with many more songs, so although there’s more variation than before, the songs really aren’t quite as good. The game has also been condensed to a total of ten stages. This version makes its appearance the Capcom Generations Vol. 1 collection, but was not officially released in North America until its appearance on the Capcom Classics Collection for the Xbox and PlayStation 2. 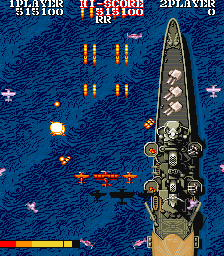 1943 Kai was also ported to the PC Engine by Naxat Soft, and significantly overhauled in the process. The graphics have been redrawn, and actually look a bit nicer than the arcade version. The music, too, is catchy, and a pretty huge step up. By default it runs in a 4:3 screen ratio, but there’s an option to change the resolution to narrow the screen, making it look a little bit more like the arcade version. 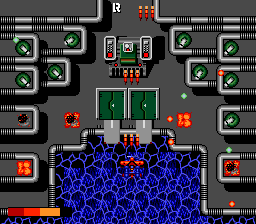 Perhaps more importantly, this version includes five brand new stages. The first part of the game is practically identical to the arcade version, but after those are completed, the “Original” mode kicks in. This is practically a whole new game, as you control a different, more powerful fighter. These stages are much more visually diverse than the endless ocean levels of the arcade game, complete with new enemies and bosses. They’re also much more difficult and involving, to the point where this version is definitely preferable over the original version. (A cheat code lets you skip to the new levels, if you’re so inclined.) 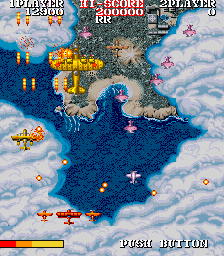 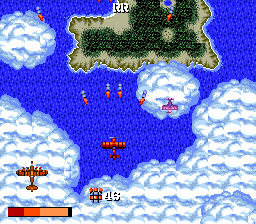