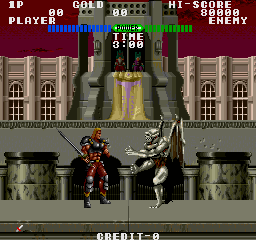 The leading up to and right after the release of Capcom’s Street Fighter II: The World Warrior were an interesting time. It’s a genre Data East effectively invented with their release of Karate Champ, but that they were never really known for even after they were sued by Capcom when they released Fighter’s History in 1993. Capcom felt the game was a bit too close to their own smash hit, though it was a genre defining game that already had several imitators. Capcom also didn’t hesitate to imitate their competitors’ innovations in the final iterations of Street Fighter II!

Either way, in the years before Street Fighter II‘s release developers were typically creating fighting games with much smaller characters, more subdued color palettes, and less complex controls. Data East’s Hippodrome is one of several of these games where characters’ abilities are much more limited, but also much more accessible. Unfortunately, however, the game is a mess, with glimpses of personality and a fun soundtrack that do little to alleviate how frustrating it is to actually play. 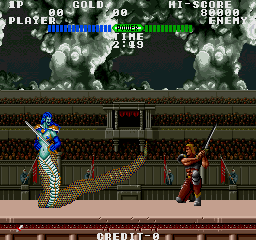 The game appears ambitious on the surface. Our lone hero can slash and thrust his weapon in four directions and jump pretty high as well. Each enemy is unique and cool looking, and between each fight it’s even possible to purchase some new weapons and a few temporary upgrades with the money earned from one’s victories.

Unfortunately, despite the variety of enemies and their myriad methods of mayhem, the key to almost every fight is to just stay as close the enemy as possible and mash the attack button like crazy. The two exceptions to this are the battles against Warg and Pon. Due to their immense size some good timing is required to evade their attacks while fighting back. The other opponents each have an interesting special ability or two and short but cool profiles before each fight, but because of the game’s very shoddy animation and hit detection that vastly favors the computer over its human opponents players will rarely have a chance to admire them. 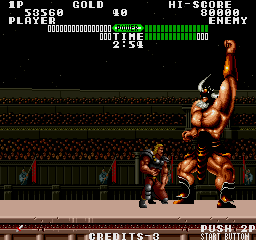 Hippodrome failed to make an impact in the US or Japan, and even a publisher as prolific as Data East chose not to port it to any home systems. It’s for the best, however, as the game had little to offer beyond some catchy songs even when it was new. This is no surprise, as among the Data East regulars responsible for the game we once again can see Azusa Hara on sound duty. The same five people alternately collaborated on music and sound design for many Data East arcade titles in the 80s. Hara however seems the most responsible for Data East’s trademark sound, with her name popping up first in the sound credits for many of Data East’s big hits like RoboCop, Atomic Runner Chelnov, Bad Dudes, and Midnight Resistance among others.