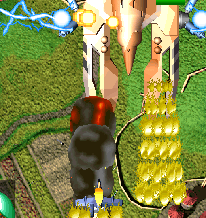 Skull Fang is a perfect example of taking something successful and then running it right into the ground. After the side-scrolling mecha action of Rohga, Data East decided to go back to the series’ roots and make another overhead shoot-em-up. Unfortunately, compared to Vapor Trail, this one is painfully average. 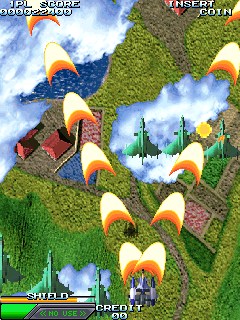 Skull Fang happens seven years after the events of the previous title. Remnants of DAGGER survived the attack against them and hid for seven years. The remnants then attack major American cities at random with the ultimate mecha Ragnarok. Fortunately the division in the Air Force that was apart of Operation Vapor Trail was renamed Skull Fang, consisting of their best pilots. Skull Fang is then called on to select only four candidates to deal with the DAGGER threat, due to insufficient funding.

Once you begin, the first option to select is your “speed” mode. “Chase” is the manual mode, which lets you adjust the speed of your craft. In most other games, this simply changes how fast your ship moves, but in Skull Fang, it affects how fast the screen scrolls. Obviously, the faster you set it, the quicker you’ll reach the boss. The “Auto” mode will automatically adjust your speed as appropriate, depending on where you are in the level. 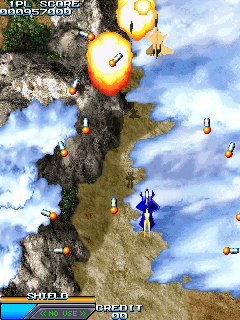 After selecting a mode, you pick your fighter. The different aircraft you can choose from are part of various military branches, including the Space Force. Next, you select your pilot, who are divided evenly between “Fighter” and “Bomber” classes. The Fighter classes have the ability to roll. By default, this triggers a shield that lasts for a few seconds before it needs to be charged up again. However, by inputting various directional commands on the joystick and then hitting the roll button, you can pull off other maneuvers, including a more powerful shield attack, an air brake, and the ability to do a loop-to-loop and face downwards for a few seconds. This allows you to shoot enemies coming from the bottom of the screen. It’s a neat idea, but a clumsily implemented one – if you get the motion wrong or the game doesn’t pick up on it, you’ll activate the default shield and need to wait a very long time before you can try it again.

In contrast, the Bomber class is much more straightforward, as it has the ability to drop bombs, which create massive explosions. Each of the four ships also has a different type of bomb. 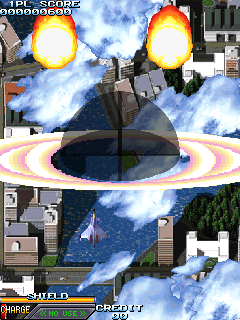 The boss fights introduce an interesting mechanic. If the boss goes off the screen, a window pops up called “Skyeyes” which shows you where and how far away it is. The bosses can also attack you from off of the screen and fly behind, over, and above you, with a target on your ship indicating their positions. If you’re playing in Chase mode, you can alter your throttle in order to catch up with them. Again, it’s another innovative idea, but in practical purposes, it’s rather frustrating to have the boss constantly floating in and out of your view. Battles tend to drag on, too, then time out if you fail to beat them under the limit. Obviously it seems like the developers were aware of this in letting you choose the “Auto” mode, which makes these quicker.

The most outwardly noticeable issue with Skull Fang is that it ditches the nice sprite work of the previous games and replaces it with badly rendered CGI ships, which makes the game look terribly dated compared to the older titles in the series, or even any other vertical shooter made in the mid-90s. It uses some scaling effects to make the field feel more three-dimensional, but it looks really cheesy compared to other shooters from around the same time, like Taito’s RayForce or Raizing’s Soukyuugurentai. The game runs on Data East’s MLC system, their most powerful arcade hardware. 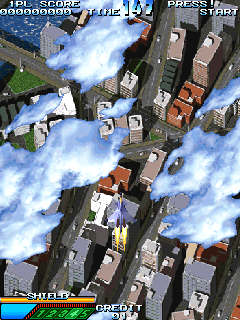 The sound effects are too loud and garish, often drowning out the music. In the Japanese version, the fighter pilots are fully voiced and blather quite a bit. In the versions outside of Japan, the pilots don’t say anything, and only the commander speakers.

It’s more than just the visuals that are lacking, though – the game just feels sloppy. Everything starts off extremely easy, but the challenge ramps up quite a bit by the third stage. To make up for the difficulty, your shields are much more powerful and can absorb many hits, but it doesn’t help much. Other than some of the cool effects, the bland and unmemorable level designs don’t really help either – the game just feels kind of boring. 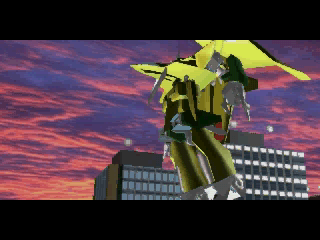 Surprisingly, Skull Fang was ported by Data East to the Sega Saturn in 1997. This port adds a lot of stuff, such as a boss rush mode, a tutorial video, a trial mode, and an additional speed mode which has two settings rather than five. In some cases, the sprites seem to suffer from flickering. Considering the power of the Saturn, it’s almost as if the developers realized the game was pretty mediocre and just didn’t care about the quality of port. Still, as a nice bonus, some arranged versions of songs from the original Vapor Trail are on the Saturn disc as redbook audio. There are also some CGI videos, but as expected, the quality is really quite dire. Finally, four new hidden fighters can be activated via a cheat code.

As with most Saturn shooters, this port is rather valuable, but given the mediocre quality of the game, it’s really just for the collectors.