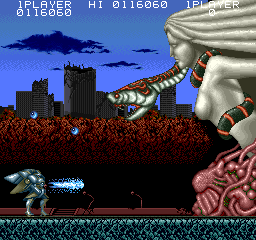 Though it’s not apparent from the title (or even from glancing at it), the goofily named Act-Fancer is actually a spinoff of the Darwin series. This is because it uses a similar evolutionary system, though it’s a side-scrolling run-and-gun, as opposed to a vertical shooter. 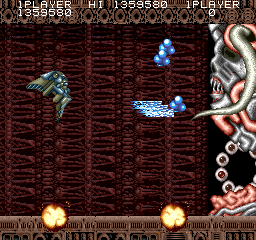 The game actually looks and plays a lot like Data East’s earlier Psycho-Nics Oscar. Though you can’t fly, you can slow the speed of your descent by holding upwards when you’re in mid-air. In the default state, you shoot forward firing bullets along with a bounding shot. One evolution up and you’ll toss flame bombs along the ground, and in a later form you’ll get a wide shot. In the strongest form, you’re fairly powerful and can pummel through practically everything, but as with before, a single hit will take you back to the weakest, almost useless form, and you still need to grab orbs to keep from devolving. One major change are red orbs, which extend the life of your current evolution without changing it. It is, however, not as complex as the Darwin games – there are only seven forms, and no branches or weird hidden mutations. There are only five levels, many quite short, and even though it’s not particularly difficult, it is unforgiving, as dying will always send you back to the beginning of the level.

The visuals have a dark, biological horror feel to them. It’s hard to look at them and not immediately draw comparisons to something like R-Type, and while the pixel art isn’t nearly on that level, some of the boss designs are appropriately grotesque. The forms of the Act-Fancer are pretty cool too, starting off as something of a wingless bird, and eventually morphing all of the way up to bipedal badass armored reptile. 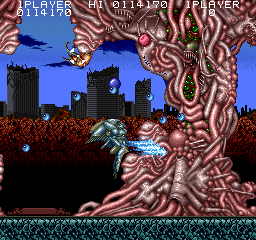 There’s the skeleton of a cool game in Act-Fancer, but it’s just too short and unpolished to register as anything more than a mere curiosity.