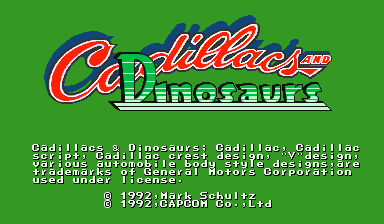 Starting life as an independent comic by the name of Xenozoic Tales, Cadillacs & Dinosaurs was a rather obscure choice for a license to make a beat-em-up out of. Despite a comic run, an animated series, and an entirely different game for the Sega CD, it’s quite likely that most will be aware of the franchise from Capcom’s brawler. While it’s far from their best work in the genre, it’s a solid game with some interesting ideas. Almost all of those ideas would be refined with later efforts in the genre, however, meaning that it’ll likely never exactly be anyone’s favorite. It is, however, leagues better than the Sega CD FMV-based action game. 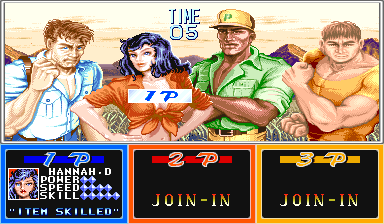 Sometime in the distant future of 2020, a great disaster struck the earth. Centuries later, the survivors head back to the surface, finding a greatly changed world in which the dinosaurs have returned. Mechanic Jack Tenrec seeks to preserve nature and protect the new wildlife. Joined by the ambassador and romantic interest Hannah Dundee and their friends Mustapha Cairo and Mess O’Bradovich, the four begin a quest to beat down a gang of poachers known as the Black Markeeters. Behind the gang, however, lies a hidden plot to take over the new world. The plot is simple, fun and pulpy, and fits the Saturday morning cartoon setting well. 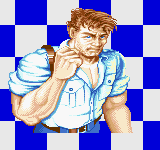 A hot-blooded mechanic who loves his Cadillacs, Jack is the lead protagonist of the series. 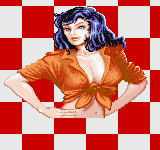 A cool-headed genius scientist who is Jack’s love interest. 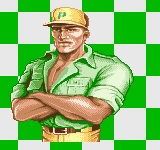 The joker of the pack, Mustapha is a skilled engineer. 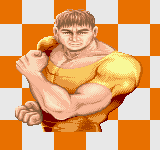 The powerhouse of the quartet, O’Bradovich is a gentle giant until you make him angry. 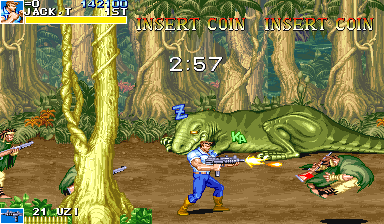 Following the standard archetypes, Jack and Mustapha serve as the averages of the group, with Hannah being fast and Mess being slower, but good at grappling. The general moveset holds no surprises from what you’d expect from a Capcom brawler, offering crowd clearing but health draining attacks, as well as dash moves. New to this game are rising attacks, executed by pressing down, then up and attack, which can be performed without draining health. They’re powerful, although you’re left vulnerable on your way down. (Mess’s has him attempt some sort of front flip before falling right onto his back, which looks… ineffective, to say the least.) One particularly nice addition are firearms that you’ll find along the usual knives, like pistols, shotguns, machine guns, bazookas, and grenades. These aren’t entirely common, but it’s a lot of fun to tear through mooks with one of these once you do. In a surprisingly violent touch, killing an enemy with an explosive will make them bloodily splatter, complete with a flying pair of eyeballs. 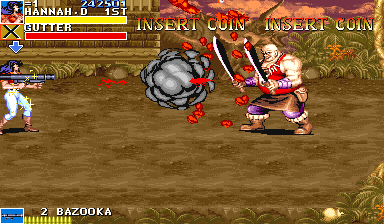 The Black Marketeers come in all shapes and sizes, from the Bikers to the Midgets, the Knife Men to the Fat Guys, and the Hunters to the deadly Walther. The gang all have a Max Max vibe to them, and each enemy has enough different variations that they don’t become boring. There’s also an interesting gimmick where you’ll find dinosaurs among the human enemies. Velociraptors, triceratopses, pteranodons, and Tyrannosaurus rexs all make appearances. Many are either docile, or sleeping, but if they get smacked by a human,  they’ll turn enraged and attack who gets too close. These raging dinos can be beaten down like any enemy, but if you leave them alone, they’ll eventually wander off. Interestingly, enemies will try and attack the dinosaurs to send them into a frenzy, but if you’re quick enough you can stop them and avoid having a raging beast on the rampage. On an interesting note, two enemy types distinctly resemble not only Street Fighter II’s Blanka, but Street Fighter Alpha’s Charlie, as well. One can only wonder if some concept art got reused, somewhere along the line.

You battle the Black Marketeers over eight stages, beginning at the top of the City in the Sea, beating up grunts before facing down Vice Terhune after he turns an enraged dinosaur on you. From there, it’s a trip to the Swamp Forest, battling poachers while waist deep in water, and taking on The Butcher, a brute with a skull necklace and two machetes. Stage three shakes things up, as you jump behind the wheel of a Cadillac down Hell Road, an auto-scrolling section where you mow down gang members, crash into barrels Starsky and Hutch-style, and try and rear end Hogg, a biker astride a colorful Harley, while he lobs grenades at you. If you don’t end the fight there, you’re left on your feet while Hogg flies across the screen in different directions, and grunts move in from all sides. 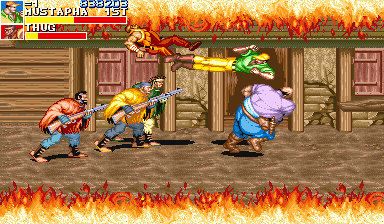 The fourth level sends you to Jack’s garage, which has been invaded by the Marketeers. After taking out their leader, a punk called Slice who can do shadow attacks, you journey to the Village of Flame, to help its villagers against a dinosaur attack, bashing poachers and ‘saurs alike, fighting Morgan, and witnessing the effects of the mutation first-hand. You head into a jungle and mine for stage six, avoiding a giant stomping diplodocus, and eventually fighting Tyrog, a more fearsome mutant. Journeying to The Vault back in the City in the Sea, you head underground with the obligatory elevator fight sequence. Finally you enter the lab, fighting off mutants left and right, and face off with Dr. Fessenden, the mastermind behind the events of the game.

The enemies are numerous without being overwhelming, and the act of hitting people is satisfying, with enemies frequently getting slammed into walls with the force of your blows. It’s really the addition of the firearms that really sells the game, however, as there’s little else that really makes this particular brawler unique. What else there is doesn’t appear nearly often enough, such as a stage where you drive the eponymous vehicle through the desert, running down scores of enemies. There’s really sort of a running theme with this game where its very best ideas don’t show quite often enough, while its weak points appear a little too much. 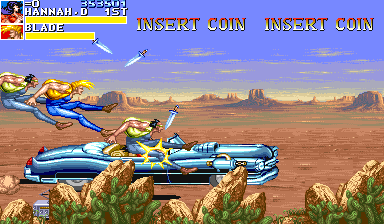 This is most evident in the last handful of stages, starting with a level that asks you to fight the very same boss three times in a row. After that, you’re asked to refight a previous boss who’s now been mutated, only there’s two of them. Given that this boss was one of the tougher ones to hit the last time you fought him, this can quickly prove to be one of the more frustrating fights. The final boss, however, might make for the weakest finish of any Capcom brawler. His first form is simply a recolor of a previous boss while his final form, a mutated H. R. Giger-style monstrosity, has him look ridiculous and makes for a very easy fight.

The sprites, while not as large as some other brawlers of the time, work well enough, with plenty of variety amongst the enemies you’ll fight. In typical Capcom brawler fashion, the continue screen is also somewhat amusing, featuring the first boss taunting you while pointing a gun to your view. Particular attention, however, has to be paid to the rocking music, which was composed by Isao Abe and Syun Nishigaki, both veterans from the Street Fighter II games. The highlight might have to be the track that plays on the very first screen of the game, a shredding track that’s incredibly good for getting you in the mood to punch hundreds of people in the fact. Disappointingly, it only lasts for about twenty seconds before you move to the next area, where it never plays again until the game’s ending. On the bright side, the game does feature the best song ever to accompany an elevator sequence.

There are some very minor differences between the Japanese and Western versions of the game; some enemies have different names, and there’s the odd line of dialogue or scene missing in the Western releases. 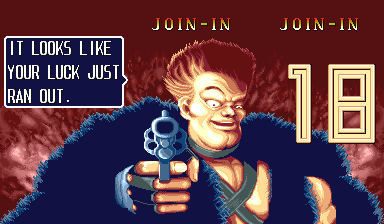 It’s difficult to speak too strongly for or against Cadillacs and Dinosaurs, placing it firmly in the middle in the ranking of Capcom’s classic brawlers. Its core foundation is solid, and aside from a poor finish, it’s a fun ride while it lasts. However, its lack of ambition and its hesitance to really put its best ideas to work really hold it back, though it’s still worth at least a playthrough.

Cadillacs and Dinosaurs never received a home port, and hasn’t appeared on any compilations, most likely due to licensing issues. The comic continued until 1997, and although there were only 14 issues during that time, it has been reprinted several times. Merchandising went into overdrive, as you could even buy Cadillacs candy and a role-playing game. The cartoon ran until 1994, with 13 episodes total. Much like the game, it’s solid, if not up there with the classics of the decade like Gargoyles and Batman The Animated Series.