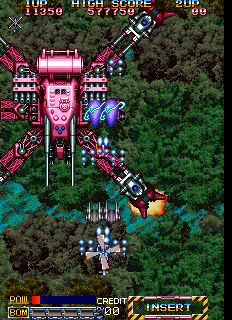 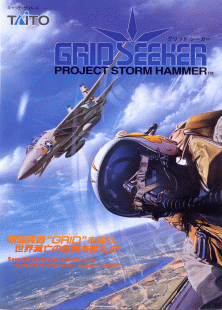 Taito deserves their proper juice for their role in evolving the shoot-em-up genre. Even to this day, their most widely recognized game is 1978’s Space Invaders, a concept simple enough to understand yet challenging enough to retain interest. They went on to produce several lesser known shooters like Exzisus and Insector X, and they’ve gotten pretty darn good at the genre by the time their fantastic F3 arcade hardware was manufactured. That board gave us the amazing RayForce before switching to 3D for the subsequent Ray titles, arguably the best Darius game in Darius Gaiden, and Space Invaders ’95: Attack of the Lunar Loonies, which is great by virtue of being the Parodius of Space Invaders. Then there’s these other two F3 shoot-em-ups no one really talks much about that both begin with G: Grid Seeker and Gekirindan. The focus for now is Grid Seeker, created in the first year for the F3, 1992, and given the black ops-esque title of “Project Storm Hammer.”

Grid Seeker‘s backstory simultaneously dates it and makes for a terribly uncomfortable future prediction, as it takes place during the fictional second Persian Gulf War, not too long after the real life one ended. Though considering that the Iraq War is sometimes thought of as the second PGW, this game’s clairvoyance is close to the same tier as the missing Twin Towers in Deus Ex. It involves a thankfully anonymous Middle Eastern nation seizing neighboring nations to build its empire and gather enough resources for weapons of major obliteration, with the crown jewel being a laser death satellite. Allying nations send out three powerful aerial fighters armed with the Gyrodrive Reactive Intercept Device, or “GRID,” to foil this militaristic nation which Taito were really smart to not single out. If it helps ease matters, Grid Seeker‘s war is clearly fictional as there is an actual threat to fight… y’know what, let’s just start talking about the actual game. 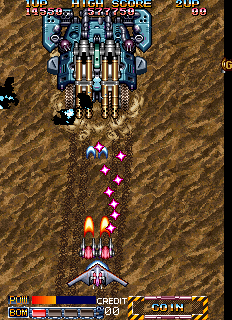 At first glance, Grid Seeker seems like a pretty cut-and-dry vertical shoot-em-up, of which there were tons in the nineties arcade scene, and it does play to many conventions of the genre save for its one outstanding gimmick. It’s basically Taito’s take on Raiden with a little bit of R-Type mixed in, and the ability to choose different aircraft like Aero Fighters and, later, Capcom’s 19XX. Your fighters are the balanced AH-64F attack chopper, the fast yet weak F-14 Tomcat jet, and the powerful but slow and wide B-2AT stealth bomber. Whatever you choose goes through seven stages of enemy territory on an even difficulty curve, taking you through forests, naval bases, cities, and deserts. The most impressive level is the second, a snowy cliffside where the F3’s power shows off bird’s eye parallax scrolling between a valley and plateau, an effect prophetically similar to the second level of RayForce. Zuntata’s sound design is up to par even if not too many tunes stick out, though the first stage tune is quite impressive.

Whichever fighter you choose starts out with a relative peashooter for a main weapon, but power-up icons beef the gun up to six times. There’s occasionally an H pickup that summons other jets to drop bombs or summon a helicopter ally to shoot missiles at the enemies, but most of the time, you’re going to be relying on your GRID pods. The GRID stays locked in front of your ship by default, but you can move them around to the side or bottom by moving forward or backward while holding onto the fire button. By default, the GRID is red and fires straight lasers, but grabbing a “G” icon while it is a different color turns it blue for bolts that fly sideways and upwards, green for homing shots, or yellow for powerful exploding bullets. Each different GRID-shot type comes with its own bomb as well, all of which offering varying degrees of offense and defense. You can hold up to four bombs, but instead of collecting floating “B” icons, this is where the game’s most unique mechanic comes into play.

As with any vertical shoot-em-up, you can expect to deal with a lot of projectiles. Most of these are pink bullets done several years before any Cave game, and if you block these bullets with your GRID, you gain a bit of meter, giving you a bomb when filled out. This leads to an interesting risk/reward system where you either waste enemies immediately or wait a slight bit to see if they’ll shoot any pink candy your way. But you won’t want a stray bullet to hit you, as Grid Seeker runs on Raiden continue rules: You come back on the spot for a lost life, but having to continue sets you back to the beginning or midway through the stage. You’ll really have to watch yourself against the bosses, including such superbig war machines as a wall-crawling tank clinging to the cliffs many meters above a river, and a submarine which refuses to give up and keeps revealing an increasingly large number of turrets. If you don’t have too many power-ups, the bosses can take ages to kill and will likely destroy you first, unless you make good use of the GRID and cause more damage to them using your bombs. It can be a bit of a tough game, and the final boss is especially frustrating, but most final bosses are in shooters outside Gradius. 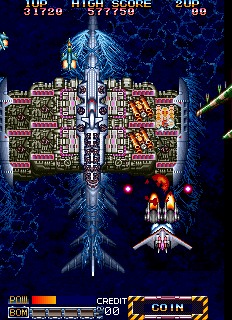 Grid Seeker is a bit of a rough game that doesn’t seem to fit with the rest of Taito’s library. It’s lacking the quirkiness of their earlier shooters and the technical refinement of their later ones. If you took away the GRID pods, it would be virtually indistinguishable from the glut of other vertical nineties shmups. That being said, if not among their most outstanding games, it still looks nice, sounds great, and plays competently. To be sure, RayForce overshadows it by a large margin, but Grid Seeker is still worth playing if you’re up for an obscure shmup that you may never have played before. It’s readily playable on Taito Legends 2 for the PS2 and Windows (or XBOX if you’re outside of the USA), and it’s thankfully not divided up like either of the Ray games, so get your GRID on and fight through one of the least comfortable backstories in a shooter since Guerrilla War.