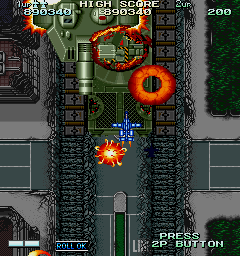 Shoot-em-ups were among some of the most common games in the arcade in the late 80s. Data East’s entries included the oddball Darwin series, as well as the chopper shooter Cobra Command. The company followed this up with Vapor Trail, taking obvious inspiration from Seibu Kaihatsu’s Raiden series. This began what’s loosely known in English as the “Vapor Trail Trilogy”, despite the fact that only the first game is actually called Vapor Trail. In Japan, all of the games are titled Kuuga, which means “Sky Fang”.

The story focuses on a terrorist group called DAGGER, who’ve seized control of the latest military technology and have used this opportunity to attack New York City. (The American version takes out the last bit of scenes from the Japanese version, where the player’s jets fly over New York.) 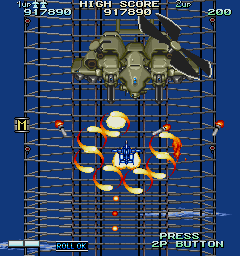 From the moment you hit the “start” button, you’re assaulted with an intense hard rock soundtrack, complete with awesome sampled guitars, and three aircraft to choose from. These aircraft all have strengths and weaknesses, most notably in speed and power, but also in weaponry. There are only six stages, but they’re all pretty challenging. Fortunately, your ship is rather sturdy, as it can sustain two hits as well as perform barrel rolls, which lets you temporarily absorb any damage. Your ship can also be stocked with homing missiles, grenade bombs, an awesome flamethrower, and defenders, which shoots orbs in every direction. You can also find a Booster, which drastically improves your firepower. It allows you to fire nukes, although you have to sacrifice your Booster.

Although on its surface it doesn’t look or feel that much different from Raiden, it’s really the strange enemy designs that sell Vapor Trail. In the middle of the first stage, you have to destroy a tank – until its turret detaches and starts flying through the sky. The second stage is filled with small tanks that use anti-aircraft flame throwers, before you fight another, larger vehicle shaped like a spider. Then you have to take on a huge aircraft carrier on treads and take down the dozens of fighters that launch from its deck. When you get to the center of the carrier, a voice says, “Destroy the Core!”, which is an obvious reference to Konami’s Gradius. Later on in the third stage, you get to chase after a rocket into outer space, which is somewhat reminiscent of Sol in the manga Akira. 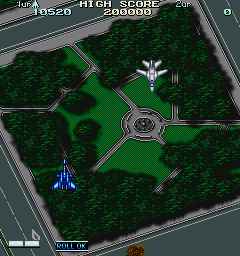 Beginning in the arcade, Vapor Trail was released on the Genesis in 1991. The port was developed by Telenet Japan and released in America by Renovation. For the most part, this version is pretty faithful to the original. It’s quite a bit easier, especially since you can take three hits instead of two, although they removed the ability to respawn when you lose a life. The visuals are solid and the music is damn good, too, which is amazing considering that the Sega Genesis sound chip can’t quite replicate the wailing guitars from the arcade version.

The ending is also completely different. Instead of shaking hands with the president, you land and watch the stars while a brand new piece of music plays. There are a handful of changes to the levels, though, the most notable being the aforementioned removal of the last bit of stage five, and the disappearance of the huge aircraft carrier in stage four. The Statue of Liberty is also missing in NYC. 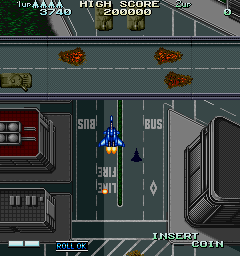 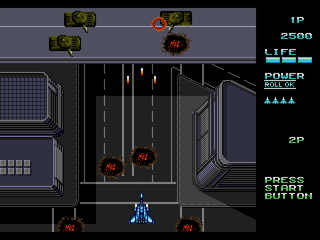