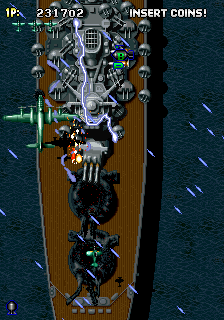 Psikyo was one of the leading shooter companies during the mid-’90s, churning out classics famous for fast gameplay, faster bullets, and dense patterns. Their flagship series, Strikers 1945, looks suspiciously similar to Capcom’s long running 19XX series. Both games purport to take place mostly during World War II, but also feature a healthy dose of sci-fi elements. While Capcom’s series is more subtle with the strange historic inaccuracies, Strikers 1945 puts it right up front and makes its alternate history involving aliens and advanced technology take center stage. You’ll fight battleships, but then said battleships will launch a transforming mecha into the air to further attack.

There are a few other similarities between the games, namely in grading your performance. 19XX grades you at the end of every level, but Strikers will make you wait until the end of the game, awarding medals in time (how fast you defeated the boss), gold (how many gold bricks you picked up from destroyed buildings and enemies), and shoot down (being sure no enemies escaped). In general, the games look, sound, and feel like the rest of Psikyo’s library – fairly average 2D graphic, acceptable but not particularly memorable soundtracks, and solid action, although nothing really innovative.

The first in the series, Strikers 1945 introduces lightning fast gameplay, huge bosses that transform into giant robots, and many other conventions the series has been known for. The story involves a terrorist organization made up of disgruntled war pilots called CANY. CANY has spread all over the world and uses secret alien technology to try to prolong World War II. In an unexpected turn, veteran Ally and Axis pilots form a group called The Strikers to take down CANY and restore peace to the world. The Striker planes are varied, coming from all around the world. Each plane has a unique charge shot and bomb. 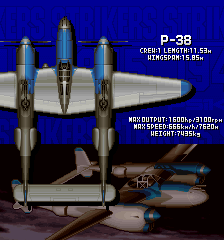 The P-38 Lighting bears a strong resemblance to Super Ace from Capcom’s 19XX series, which cannot be a coincidence. Options even stay to the side of it. When charged up, the options form a wall that does not move until the attack is done. While the wall does not move, you can, making it easy to be in two places at once. It is very handy and can help get out of tight situations. Its bomber is a loop followed by a huge explosion, much like Super Ace. 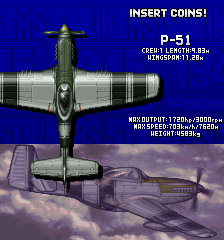 The P-51 Mustang has a very strange charge shot that takes a while to get going. The options slowly spin in front of it, wrecking everything in their path. It is also the only charge shot that can erase enemy attacks. Unfortunately, this attack is very weak unless you have the maximum of four options. Its bomb is far more impressive, calling in three oversized bombers to carpet bomb the place. 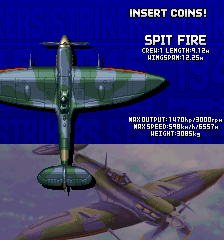 The Spitfire has options that follow it around and shoot powerful, but slow missiles. It charge shot is a wall, similar to The Lightning’s, but they shoot diagonal and follow you. Its bomber has to be one of the best in the game, shooting a powerful blast right in front of it. Your movement slows down once this blast is used, making it feel much like the laser bomb from Dodonpachi. 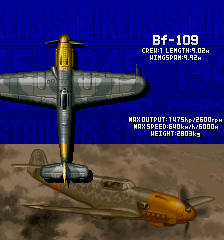 The Messerschmidt is the only German plane in the game. It has options that aim for enemies as though they had a mind of their own. When charged up, they spin around, making a drill of bullets. Its bomb is one of the stranger attacks, calling in many giant planes to come in and suicide bomb everything on screen. 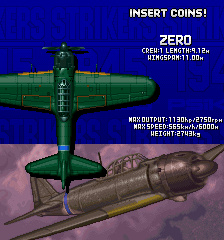 One of the two Japanese planes. Zero’s options are very powerful, lobbing grenades and homing in on enemies when charged. Its bomb is bizarre and reminiscent of the bomb in 1943. A storm is called in, blasting all enemies on screen with lightning. It is surprisingly powerful, and possibly a reference to the Divine Wind, or Kamikaze legend. Zero is actually a great plane for beginners, due to its combination of power, speed, and homing. 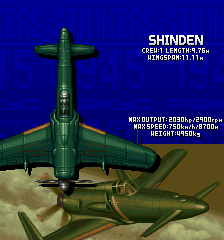 Shinden is the other Japanese plane. Due to its experimental design, Shinden is very unwieldy, but with its difficulty comes amazing power. Shinden’s options are similar to Lightning’s, but when charged, they shoot in a horizontal line, rather than a vertical one. Shinden also has an interesting bomb, where it does a loop, but leaves a shadow version of itself. The shadow version charges forward and slices through all enemies in its path. It is a very impressive attack.

There are eight levels, the first five being various locations in Europe in a completely random order. The last three levels have The Strikers blasting off into space, landing on the moon, and storming the alien base. Once on the moon, bosses are no longer transforming robots and change to large, shape shifting crab aliens. Some of the bosses are randomized too, meaning that multiple playthroughs are required to fight all of them.

Another strange thing is that when you collide with any enemy, you do not die, but rather power down, which usually results in the loss of an option, which can be crippling. This even applies during respawn time and invincibility. Power ups tend to hover on top of bosses or large enemies, making catching them a pain if most of the screen is filled up. Unless you are in respawn time, colliding at the lowest power level results in the loss of a life.

The scoring system is partially based on your grades you get at the end and also based on gold bars you pick up. Gold bars are found inside destructible buildings or ground-based enemies, and are very common in most levels. They shine very brightly and then grow dull again, cycling between the two – they’re worth more points when they are shiny, so precise timing is needed to pick them up at the right time and dodge all the bullets filling the screen.

Strikers 1945 also has a somewhat unusual ending. Upon beating the game, you get to see the pilot of each plane, most of them are females, except the Shinden’s pilot, who is Ayin from another Psikyo shooter, Sengoku Ace. He later appears in Gunbird 2 as an extra character. The issue arose from the secret endings, all of them being topless pictures of the pilots with some creepy text describing their measurements (you don’t actually see anything). These were censored in the home versions of the game. 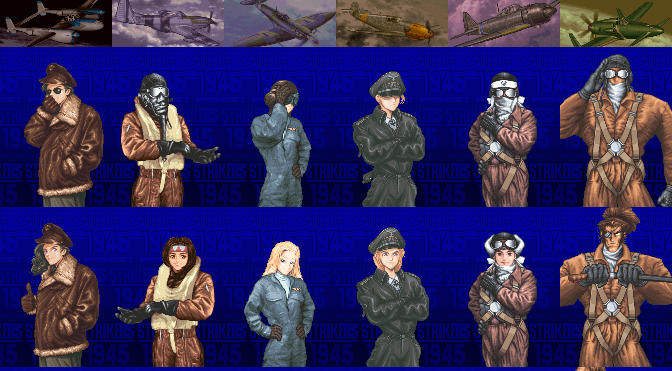 Strikers 1945 was ported to both the PlayStation and Saturn. They’re both solid ports, with the PlayStation version have a very slight upper hand on a few visual details (the Saturn version lacks transparencies), along with less slowdown. Several years later it was also ported to the PlayStation 2 on the same disk as the sequel, called Psikyo Shooting Collection Volume 1 (in Japan) by Taito, and 1945 Part I & II The Arcade Game (in Europe) by Play It. These are solid ports, though the visuals are upscaled and interlaced. They support tate for true vertical display, but unfortunately the European versions lacks a 60 hz mode and the save game function has been removed.