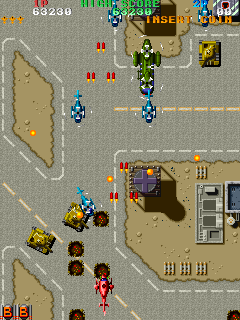 Twin Cobra is the second game in the Tiger-Heli series, and Toaplan’s fourth shoot-em-up. In Japan, it’s known as Kyuukyoku Tiger (“Ultimate Tiger”). While their earlier efforts were all at least pretty okay, this is their first truly great game.

Most of the annoyances from Tiger-Heli are gone. Bombs are no longer displayed on your helicopter for enemies to destroy, with a more traditional bomb stock icon in the lower corner of the screen. Your shot reaches the full range of the screen. Your helicopter now darts around quickly and doesn’t suffer from Tiger-Heli‘s sluggish movements. There are also several new weapons – every so often, a large, armored helicopter will enter the screen, which drop power-ups, bombs, or color-changing circles that change your helicopter’s weapons to the according color. Red is the standard weapon that shoots straight and does lots of damage. Blue grants a spread shot, while Yellow fires to the sides of your ship and at its highest level, fires in a cross shape. Green shoots narrow bullets that fire in a thin stream, but do more damage than the Red weapon. All of the weapons in Twin Cobra are powerful when leveled up, making it sufficiently more manageable. 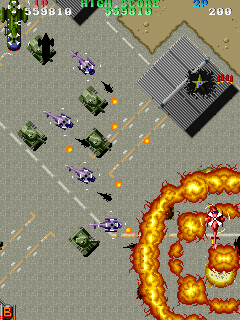 There are ten stages in total. One glaring issue, particularly for competitive gamers: when you continue, your score doesn’t reset. Since Twin Cobra loops indefinitely, you can theoretically get the best score in the world by pumping enough credits into it, completely ruining the ability to play it for score.

Twin Cobra sold very well and was ported to three home consoles: PC Engine, Genesis and NES. The PC Engine version runs the fastest and plays the most like the arcade version. The Genesis/Mega Drive version runs slower than its 8-bit counterparts for some reason, but looks better. The NES version takes a huge hit in graphics and sound, but otherwise plays pretty well for an 8-bit conversion. All three versions add in checkpoints that you get kicked back to when you die, similar to the Japanese version of the game, though in general the difficulty level is a bit lower. The X68000 and FM Towns versions are very close to the original arcade version, with their own different soundtracks. Both Kyuukyoku Tiger and Twin Cobra are featured on the Toaplan Shooting Battle Volume 1 for the PlayStation, and like Tiger-Heli, also features an arranged soundtrack. Sadly, there was no Volume 2.

One interesting note is that the armored helicopter enemy that is important to gameplay reappears in Air Gallet, a game by Gazelle, one of the companies that formed after Toaplan fell. Even though Air Gallet is in no way related to the Tiger-Heli series, it’s a pretty cool homage.