The Gondos have stolen your women and taken them to the planet of thorns! Are you a bad enough dude to rescue them? 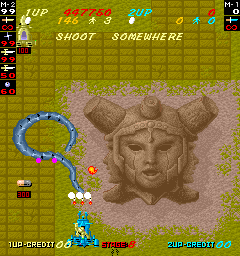 That’s obviously not quite how the intro to Gondomania goes, but it’s still the premise of this overhead shooter, where you play as a guy riding a hoverbike, taking down those nasty Gondos. There are two attack buttons – one of them activates your bike’s guns, which always fire forward, and the other throws some kind of subweapon. These include daggers, axes, grenades, and others. Like Heavy Barrel, it uses a rotary joystick so you can aim and fire the subweapons in eight directions. The ammo on your bike’s cannon is limited, but you can chuck the default daggers with impunity. The other weapons are limited, and you can store up to four at once. Most defeated enemies drop money – all of the power-ups have a monetary value assigned to them, and need to be “purchased” before they can be picked up. It gives an extra layer of strategy – do you want to pick up that bundle of axes, or save up for an additional life later on? 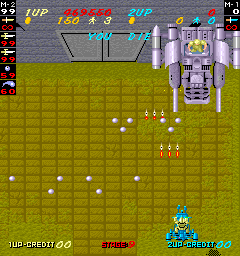 Like most Data East games, the enemies get a little weird, like the enemy soldiers that appear to be wearing purple princess dresses, but attack just as fiercely as the regular enemies. Bosses include giant mechas, a flaming Cyclops, dragons, and other oddities. 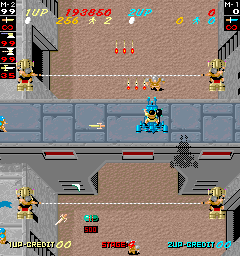 Gondomania has a solid core, but most of the game’s 10 levels feel kind of same-y. There’s no break after defeating bosses, and even though every level technically has a unique setting, it all uses the same drab color palette, with many similar enemies, and a lot of the transitional sections are recycled. There’s also only one main theme that plays through most of the game, as well. It’s an excellent track, propelled by rocking FM synth, but it does grow old. 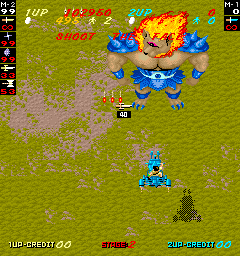 The Japanese title of this game is Makyou Senshi, which means something like “Illusionary Warrior”. But since that name is rather generic in English, it was changed to Gondomania by the Data East US staff, named after Yuji Gondo, one of the game’s developers, in order to make it more memorable. 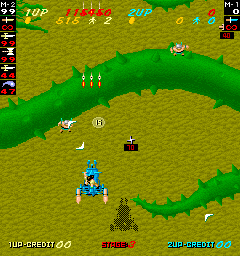 There are a few other regional differences – Gondomania is a little easier and has some extra graphical details, plus the story intro screen is only in this version. The main theme is different, too – each have a similar main melody but feature different arrangements, with Gondomania‘s track being faster paced and more intense (and also better). The bosses are used in different levels, as well. Gondomania has a piece of text that flashes advice during boss battles, typically obvious stuff like “Shoot the head!”, but it gets cheeky later on. During a battle with a snake-like dragon, it uselessly suggests “Shoot somewhere”, while at the final boss fight, it calmly states “You die”. 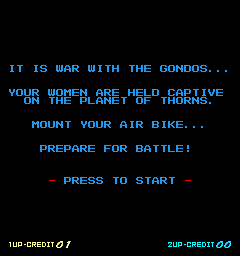