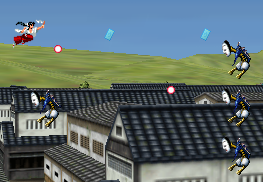 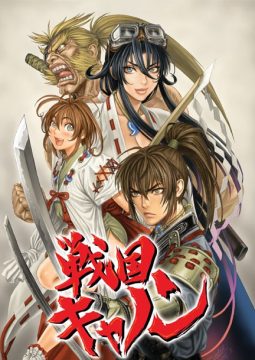 Although Psikyo more or less collapsed around 2005, it founds a spiritual successor in X-Nauts (pronounced “Cross-Nauts”), who did the PS2 Cho Aniki game, among other things. In 2005, they also resurrected the Sengoku Ace label for a new PSP game, dubbed Sengoku Cannon. 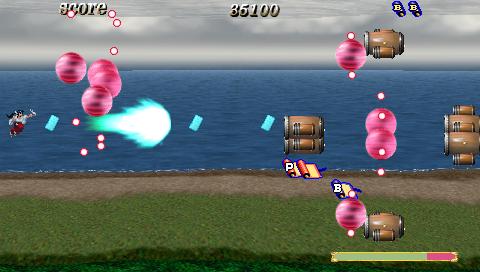 There are five levels in Sengoku Cannon, less than the previous games, although they are a bit longer, and frankly, a bit on the dull side. However, the random stages and branching paths have been completely removed. There are four characters to start out with, with two more being unlocked after multiple game completions. Strangely, the familiars from Sengoku Blade have been removed, and instead picking up P scrolls will just increase the power of your weapon. 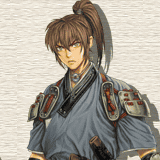 The “main” character, as it were. He attacks with energy waves, and shoots homing lasers for his special attack. 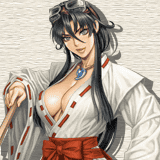 What would a Sengoku Ace game be without Koyori? Still attacks with ofuda cards, of course. 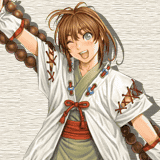 The requisite cutesy girl. Her needle attacks have huge width. With her special attack, she fires out a huge purple beam of kanji. 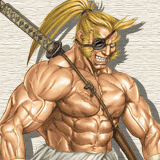 Ayin returns here, too, looking crazy as ever. 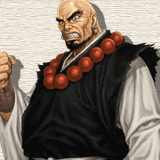 Tengai initially shows up in the last stage as a “dark” form. Once you beat the game, you can play as him. 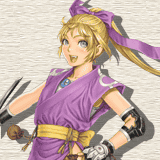 Junis also returns, but needs to be unlocked after beating the game a few times. She’s missing her lemur though! The biggest concession to the new technology are the 3D backgrounds, so the game looks like a side-scrolling version of Shikigami no Shiro. Make no mistake about it – this game is ugly. The backgrounds are repetitive and sparsely detailed, with ugly, blurry bits of texture. The frame rate is also choppier than it would be if it had used 2D backgrounds, and there’s an obnoxious amount of slowdown, even when there isn’t anything particularly taxing happening on screen. At one point, when you descend through the clouds, you can actually see clipping errors. How did this happen, if the path through each stage is completely predetermined? The final battle is fought against an entirely dark background – does this set the mood or did the designers just not have time to implement anything proper? The stages are also longer than in the original Psikyo arcade games.

The other Sengoku games were somewhat saved by their spritework, which is mostly missing here. Many of the bosses are simply tiny floating humanoids, much like your own player character. Speaking of which, although your player is technically the same size as in Sengoku Blade, they look remarkably tiny on the PSP screen, especially against the widescreen display. 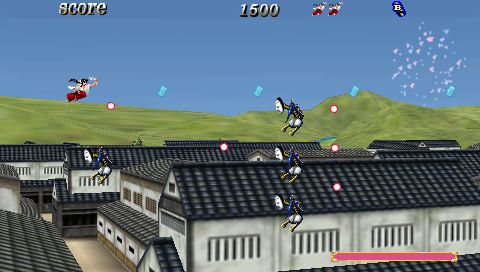 Perhaps the size of the bosses were adjusted due to the new “cannon” fire. There are three types of attacks – the standard rapid fire, a laser attack that slows down the movement of your character, similar to Cave shooters, and the cannon attack, a single powerful shot. If you kill an enemy with the cannon, all of their onscreen bullets are converted into points, along with a multiplier. It’s a nice touch that they added some more modern scoring mechanics.

It may be one of the few original shooters for the PSP, but Sengoku Cannon feels cheaply made, even if the core action has improved a bit. 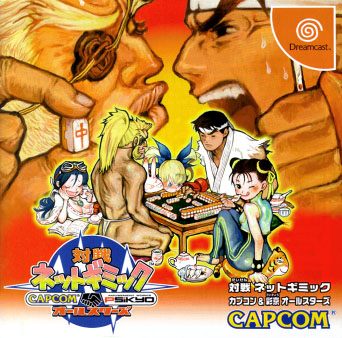 In addition to shooters, Psikyo’s other forte was mahjong games. The Sengoku Ace characters, along with the Gunbird folk, joined up with Capcom’s cast of characters for the Dreamcast game Taisen Net Gimmick: Capcom vs. Psikyo All Stars. Of course, it was only released in Japan. 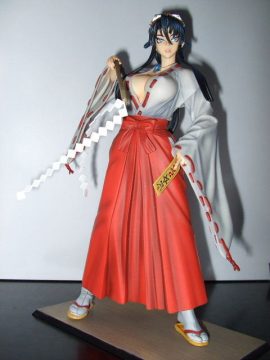 To promote the release of Sengoku Blade, a few different PVC figures of Koyori were released. These were particularly notable because you could remove all of her clothing, leaving the poor girl in nothing but her thin underpantiesWhile not uncommon amongst the otaku fanbase, it is a bit odd to see such figures be officially sanctioned by the developer. There was also one released for Mizuka, although that one at least lets her keep her dignity. 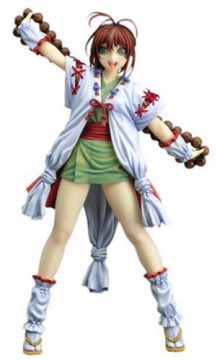