Psikyo’s Sol Divide is quite an unusual game, one that blends numerous genres into one. It’s mostly a horizontal shooter, although it has some elements of beat-em-ups, and some light RPG trappings too, especially if you’re playing the home ports. 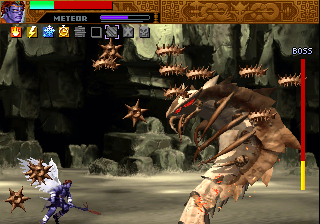 The game uses three buttons – one for shooting, one for a close range attack, and one to change what spell is equipped. Each character has their own combo, which are executed by pressing the attack button three times, a direction (which direction changes with the character), and then attack for the final time. It is very important to know combos too, as shooting is relatively ineffective in short range. Enemies are very similar, as some can’t attack at close range, some can’t attack long range, and others have both types of attacks. Since most enemies are bullet sponges, the concentration of melee combat and combos drastically changes the way you’re supposed to play. In turn, your character has a fairly generous life bar, although due to their large size, the short invulnerability period, and the generally tenacious enemies, you can find yourself depleted very quickly.

Pressing both the shoot and melee buttons simultaneously will use magic. There are eleven spells in total, but each character gets a spell only they can use, so really, you only get nine. Fire will send out a burst of flame for several seconds, while Freeze will stop enemies mid-flight, allowing you to get in extra attacks. Thunder, Death, and Meteor will attack everything on the screen, while Slow and Wind can be used to slow down the action, and Heatbody will grant temporarily invincibility. There are also character specific spells: Phoenix for Kason, Nightmare for Vorg, and Summon for Tyora. Certain spells like Fire, Thunder, Slow and Freeze will drain your magic bar, but this can be refilled by hitting with close range attacks. The other spells can only be used once before they disappear and have to be collected again. In addition to spells, enemies will also drop various items to extend your life meter or increase your shot power.

The story involves Ifter, a power hungry emperor trying to take over the world, become a demon, and kill lots of people in the process. There are but three people strong enough to face Ifter and his army.

Kashon is a blue skinned hawkman and Prince of Neraphai. Once Neraphai was conquered, he was the only hawkman strong enough to fight. Kashon is just as good at close combat as he is with long-range attacks, largely thanks to his gigantic spear, and is the most balanced character. His exclusive spell is Phoenix, which summons a large, indestructible firebird to help out for a few seconds before disappearing. He’s also the easier character to execute combos with, since you just need to press Right between the third and fourth slashes, as opposed to Up or Down for the other characters.

Vorg is a dark knight from Silverna. He used to work for Ifter until he was betrayed and now craves vengeance. Vorg is somewhat of an antihero, barely caring that the world around him is being destroyed and only thinking about killing Ifter in the most brutal and painful way possible. Vorg is the close range character, doing terrible damage with his throwing knives, but huge damage with his sword. His exclusive magic is Nightmare, which slows down whatever it hits and drains the enemy’s health until the spell wears off.

Tyora is a wizard from Rangforce and guardian of the largest temple in the world. It is hinted that she used to be very close to Ifter years ago. Tyora is the long-range character, shooting huge waves of magic energy from her staff that does a lot of damage. While her close range attacks are weak, they are at least quick, allowing for easy hit and run tactics. Tyora’s exclusive magic is Summons, which summons a random creature depending on the level to jump in, hit whatever is in its path, and run away. For such a cool looking spell, it’s actually not very good, unlike Phoenix and Nightmare. 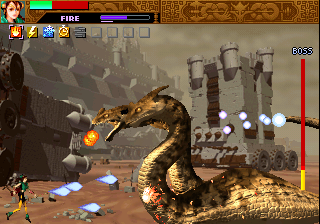 Though there’s nothing quite like Sol Divide out there – the closest comparison is Lords of Thunder, but outside of the whole “floating guys in a horizontal shooter with melee attacks”, they’re nothing alike. In its efforts to stand out, though, it ends up stumbling quite a bit. For starters, it’s incredibly disjointed. Each stage is remarkably brief, and it really just feels like you’re flying a few feet, maybe fighting a boss, then moving onward. As typical of Psikyo games, there are multiple routes through the game, at least, as each character starts on different stages, and can choose between other levels on a map screen. To make up for the very short quest, there’s a second loop where last three levels were all fused together into one long, mega level. You also cannot credit feed through the last stage. Strangely, there is no score keeping in the arcade version.

It’s also an incredibly ugly game. Psikyo’s games never pushed any graphical envelopes, but they were always at least competent. Sol Divide tries to be progressive by utilizing CG rendered graphics, but everything looks dark, blurry, and washed out. The only saving grace are the impressive bosses, which are large enough that you can properly make out the details, and are well animated to boot. 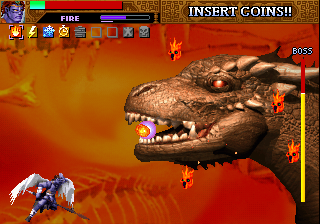 In addition to the initial arcade release, Sol Divide was ported to the PlayStation and Saturn. These ports were published by Atlus and are pretty much arcade perfect. It includes a brief but terrible intro movie, which is pointless. There’s now a scoring system in the Arcade mode, which will grant multiplier based on successive combos, and the rapid fire button is awfully welcome. Most noteworthy is the Original Mode, which puts a far greater emphasis on the RPG elements. Here, you are tasked with taking siege on a 17-floor dungeon. After picking your character in the king’s throne room, you can choose a variety of items to equip. Killing enemies will grant you experience points, which will raise your level and in turn lengthen your life meter. They will also drop treasure chests, which can be opened any time and will give you more items. Some will increase your shot power, others will restore health. Some will increase your melee and armor strength, while others can be equipped to more drastically improve these skills, or grant status immunities. Some chests are also locked, which require keys, which are found in other treasure chests.

The catch is, this whole mode is sort of like a Rogue-like. Whenever you are killed, you are sent back all the way to the beginning. You keep your level, but all of your items are lost, and your stats are cut in half, if you increased them at all. There is a way to return to the throne room, thus allowing you to keep your items and hide them away in storage, but it requires finding a special jewel. Of course, all treasures are randomized, and there’s a good chance you won’t find one before you die. After most stages, you can also choose to replay the current stage, or dive into the next one. You’re also allowed to save here, too. 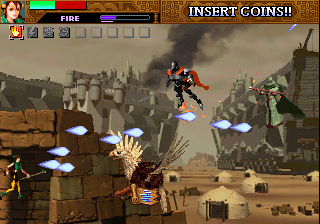 While respect has to be paid for Psikyo for creating a console-specific mode in a time where most shooters just got straight arcade ports, it doesn’t work out all that well. The enemies grow more powerful as you go deeper in the dungeon, and at the outset, you are simply far too underpowered to make it through on your first goal. Thus, the only option is to grind, grind, grind, slowly climbing through the levels and hopefully lucking onto the right items so you can increase your stats without too many penalties. In a better game, one which didn’t repeat the same awful backgrounds and bland enemies over and over, this might’ve worked, but the core game is too weak to sustain the hours you’ll need to see this one through to the end.

While the Saturn version of Sol Divide was never released in North America, the PlayStation version was instead ported by XS Games, the same budget line company behind the infamous Mobile Light Force series, which is really just Gunbird and Castle Shikigami with really awful box art. It also suffers some completely embarrassing issues. The pre-level story scenes are all cut from the Arcade mode, and the endings were simply left in Japanese. There was an English version of the arcade game produced, so why they couldn’t have used that translation is a mystery. The option to save your game has also been cryptically removed. For the Arcade mode, this means you can’t save your score, which is a bit annoying. On the other hand, it totally ruins the Original Mode, because in order to properly beat it, you’d need to do it all in one sitting. No thank you. This version, strangely enough, also ended up on Steam, though it’s just an emulation of the American PS1 game. 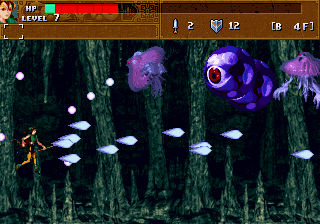 Sol Divide was also ported to the PlayStation 2, published by Taito. In Japan it was bundled together with another Psikyo title, Dragon Blaze, while it was issued as a standalone release in Europe by 505 Game Street. These are just ports of the arcade version, though the European version has all of the English story scenes in place. It runs in the same upscaled resolution as most arcade ports on the PS2, so it’s not quite as accurate as the 32-bit ports, for those concerned with visual purity, but otherwise they play just fine. However, it is also totally missing the Original Mode.

Sol Divide has a pretty rotten reputation, one that’s not entirely deserved. It certainly tries a lot of unique ideas, and it’s quite accessible and easy to learn, in spite of its clumsiness and ugliness. You need to play with an entirely different mindset from other shooters, especially concentrating on the melee attacks. At the very least, it’s worth checking out for this alone.