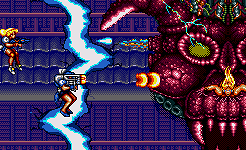 Trouble Shooter and Battle Mania did not become explosively popular in either the US and Japan but their creators were happy enough with the end result to begin work on a sequel, Battle Mania Daiginjou. It was subjected to a much smaller run than Battle Mania making it a bit more obscure, which is unfortunate since it’s one of the best shooters available on the Mega Drive. 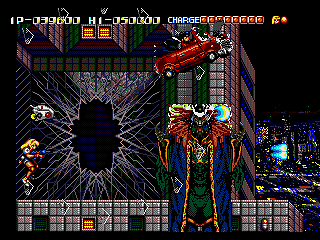 Mania and Maria’s mission is a bit more personal now too. The villain of the first game, Morgstein (known as Blackball in Trouble Shooter) is back from the dead. Impressed with Mania’s appetite for destruction, he attempts to abduct her to transplant her brain into the computer system of a massive tank he has created in hopes of making it the ultimate weapon. Mania and Maria of course want nothing to do with it and a once again start a massive rampage of destruction across Heisei Babylon.

Daiginjou opens up with a bang, and the sense of urgency of the first level is complemented by it taking place overnight with Mania going at it alone (Maria is still asleep). The first level’s enemies are all a dark reflections of the ones found in the first game, with magical spirits and youkai inspired monsters instead of the expected enemy aircraft and missiles. 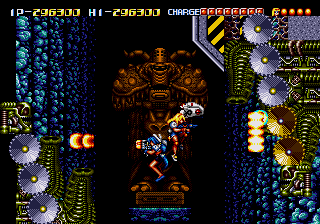 Despite the darker opening level and more intense soundtrack, the characters and writing are as fun as ever, with Maria more worried about relaxing at the beach than figuring out whatever Morgstein is up to and Mania mostly concerned with being able to continue funding her diet of junk food. True to the “Vintage” in the game’s title, Daiginjou is both a much more advanced and much more polished game than its predecessor.

The controls are the same as the first game but with some welcome additions that can be set before starting the game. The first is for that drone that follows Mania and Maria around. Rather than just keeping pace with them it can instead be set to revolve around them regularly or to even fly in the opposite direction of wherever they’re moving. Even cooler though are the two new options for controlling Mania herself. Now the player can choose to have both her and Maria always flip to face the same direction, letting them do the maximum damage possible a target no matter which side of the screen it’s on. Most ambitious, however, is the option to let Mania fire in any of eight directions and shoot in that direction continuously by holding down the fire button. 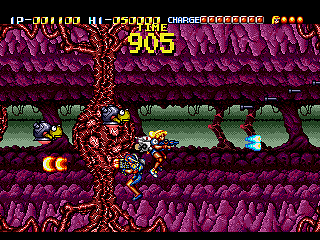 One would think these are gimmicks are to provide extra “levels” of difficulty, but “Team Space Ironmen” knew exactly what they were doing. All three options are equally viable ways to play the game, and none of them make Daiginjou particularly more or less challenging. It’s very impressive to try the game with all three modes and see that while some particular encounters are a bit easier with some (the giant spiders in the first level are much easier to destroy when Mania can shoot straight up as example), in general it’s great way to make the game accessible to players used to various methods of aiming in their action games.

Not only does Daiginjou offer superior music, graphics, and controls, it also has nine levels compared to Trouble Shooter‘s six! Impressively, like in Trouble Shooter each level has a completely unique look along with some unique enemies. Highlights include a long battle against a huge demonic train and a factory level with a cool twisting background that concludes in a boss battle that wouldn’t be out of place in Gunstar Heroes or Contra: Hard Corps. In keeping with tradition, there’s also a knock against Nintendo (though this time more subtle) with the inclusion of yellow-caped enemies that look an awful lot like Mario in Super Mario World. 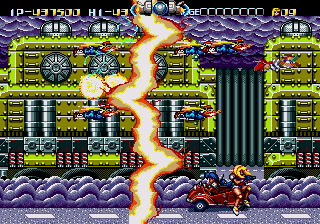 From start to finish, there’s a tremendous amount of love went into every aspect of Daiginjou, and it’s a shame that it didn’t get a more widespread release when it was new. That said, someone at both Vic Tokai and Sega did like the characters enough to get them a cameo appearance in Segagaga. 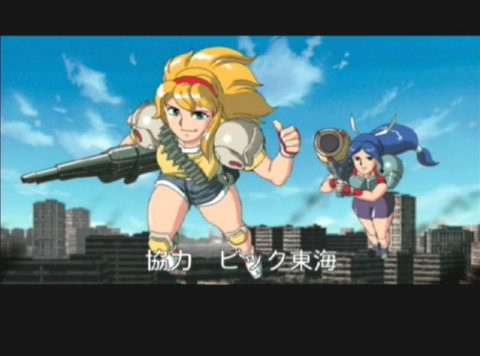 Unfortunately, since Daiginjou received a much smaller print run than almost any other Vic Tokai game, and was only released in Japan and Korea (under the name Battle Mania: Daeum Yang), very few people got a chance to actually play it. It being legitimately hard to find combined with the game’s quality has made getting an original cartridge unaffordable for many. On top of that, both Trouble Shooter and Battle Mania Daiginjou have never been re-released or ported to any other systems, meaning most will have to turn to emulation to actually play them. 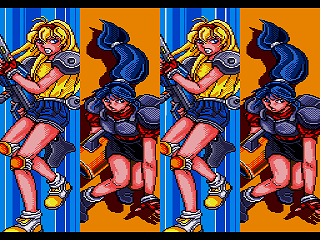 The good news is that Daiginjou has an excellent English fan translation by M.I.J.E.T., meaning English speaking players can appreciate both the fast action and the fun dialogue.

Technically Daiginjou is the final Battlemania / Trouble Shooter game, but there were plans for a third game, titled Battlemania NY: Gankutsujou. The title is a plan on Gankutsuou, the Japanese title of The Count of Monte Cristo, but replacing the word for “king” (“ou”) with “queen” (“jou”). Some documentation reveals this was initially conceived for the PlayStation and Saturn, and eventually a design document was created pitching the game for the Dreamcast. Rendered completely in 3D, includes eight stages, and switches between three different perspectives: side-view (like the Genesis games), overhead, and behind-the-back (like Space Harrier). This document is from Nazo no Game Makyou 4 and includes a full interview with the director, Takayan.

Thanks to Kid Fenris for the digging up the book where these design documents were scanned from.