Time of a year end round up here at HG101!
When we began 2019, we had pretty ambitious plans when it came to book releases, with four planned: Namco Arcade Classics, Wrestling with Pixels, The Unofficial Guide to Shin Megami Tensei and Persona, and the crowdfunded Japanese Video Game Obscurities hardcover. Alas, earlier in this year, my day job decided to go through a massive corporate reorganization which resulted in substantial layoffs, canceled bonuses and sub-cost-of living raises, and mandatory (uncompensated) overtime for the entire summer. Needless to say, this put a delay on some projects while I tried to maintain my sanity. (Remember kids, if you can, organize your workplace!) So here’s the status of everything we worked on all year. 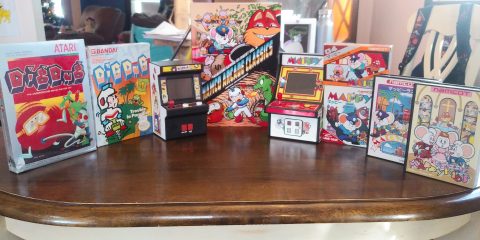 Namco Arcade Classics
We got this published at the end of November! The full table of contents is here. Namco has so many strange and wonderful games outside of their more well known golden era arcade titles, and this anthology covers a bunch of them. Dig Dug and Mappy are the cover boys since there are so many ports and sequels, but there are also lots of other offbeat titles covered like Wonder Momo, Genpei Toumaden (AKA The Genji and Heike Clans), Youkai Douchuuki, Marchen Maze, the Valkyrie series, and many others. We’ll probably double back to do a second volume with some other titles like Druaga and maybe some non-arcade games like Klonoa, but that’ll be awhile off.
Wrestling with Pixels
This project has been in the works since 2013, and I’m excited (and relieved) to say that it’s almost done. One of the reasons it took so long is because there really was a ton of stuff to cover – I think the author underestimated how much there was when he began working on this, but the end product is one of the largest color books we’ve done (over 230 pages with 115,000 words), covering over 250 games as well as other products like pachinko games, pinball cabinets, LCDs, wrestlers featured in other video games, and many other features. The book is in the final stages now as we finish copy editing, assemble the index, and other tweaks. The digital version should be available before the end of the year. Since this was originally Kickstarted, the backers of the original project will get precendence in receiving their paperback copies, so in order to account for printing/shipping time, these will be sent out in early 2020. This will be handled by the original Kickstarter campaign rather than by myself. The wider paperback release will be made available in February.
The Unofficial Guide to Shin Megami Tensei and Persona
We had intended to get this out before the end of the year, but unfortunately the aforementioned work issues and getting the other books completed delayed this a bit. This book is about 85% complete (and I’m going to try to get together another sample to Patreons for Christmas again this year) but still needs some smaller features completed. I’ll be looking for freelancers shortly to commission these pieces, so if you’re interested, please keep your eyes open! We’re also getting the cover together shortly as well.

Japanese Video Game Obscurities
This book was released by Unbound last month! The full table of contents is here. Backers should have their copies by now, and I’m told it’s available in bookstores in the United Kingdom. Due to international distribution, it looks like the US release was delayed a bit, with an anticipated release date of January 2020 (you can still pre-order it), but Amazon UK ships overseas (and it’s currently discounted as well!) if you don’t want to wait that long.
I actually began work on a follow-up volume with even more offbeat stuff earlier in the year, but put it on hold until this one was published to see how it was received. In the meantime, another project will end up taking priority (listed  below!) though a couple of these have already been featured on the site (Xerd no Densetsu, Cookie’s Bustle, and Hurry Fox, to name a few.) You can also read about some games that didn’t make the cut, that will probably be featured in this potential second book. 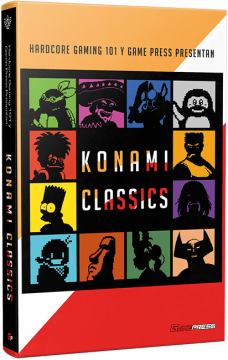 Spanish Konami book
Konami Classics has been released on Spanish courtesy of Game Press! While our previous translated volumes contained some additional content (such as some extra Castlevania-themed articles that eventually ended up on our Digest Vol. 4), this one is actually substantially expanded beyond its English release. This is because it really needed localizing for the Spanish market – the original American edition built itself around Contra, but in Europe, not only was Contra not nearly as popular, but it also substantially altered into Probotector. We toyed with the idea of having Rusty, the cover artist, re-do the theme using the robot warriors instead of the commando dudes, but ultimately Game Press decided to expand the theme with some other Konami related articles. Many of these are their beat-em-ups, which will eventually be included in the HG101 beat-em-up book as outlined above. But there are also extra several other features, mostly written by the Game Press folks, including Frogger, Pooyan, Roc n’ Rope, Track and Field, and several others. (I did one for Tutankham, since it was an old childhood favorite of mine for the Atari 2600.) So this book is basically an HG101/Game Press collaboration. We’ll be doing another Konami-themed book focusing on Silent Hill and Metal Gear, and will be featuring similar content to going along with it, but since our plate is already well filled through 2020, this is another far off project for the moment.
And now for our upcoming projects:
A Guide to Japanese Role Playing Games (tentative name)
Yes, HG101 and Bitmap Books are working together to put out a massive book about Japanese RPGs! In format, it is similar to the CRPG book published by them earlier in the year and assembled by Felipe Pepe, though the layout and style is a bit different. We’re going to cover as many as we can squeeze in, from the early PC days with games like Panorama Tou and Mugen no Shinzou, all the way up to modern day, probably ending with the Final Fantasy VII remake (part 1). The focus is on “traditional” JRPGs like Dragon Quest and Final Fantasy, but is also going to include tons of action-RPGs (Hydlide, Ys, Kingdom Hearts), strategy-RPGs (Fire Emblem, Final Fantasy Tactics), monster collecting games (Pokemon, Yo-Kai Watch), Rogue-likes (Mystery Dungeon), first person dungeon crawlers (Etrian Odyssey) and more. This is currently scheduled for late 2020 and will be our priority for most of next year. If you follow my Twitter account, I’ll probably be posting a lot of what I’m currently playing and writing about (lately it’s been the Namco Tales games). We will also be opening submissions for a few select topics in the near future.
Shoot-em-ups Vol. 2 and Beat-em-ups Vol. 1
Two long outstanding projects here. These are currently on the docket after the SMT/Persona book and JRPG books are finished, which won’t be until near the end of 2020. Content-wise, the shoot-em-up book is almost complete, but much of the content still needs polish. Topics scheduled for inclusion include Psikyo (Gunbird, Sengoku Blade), Toaplan (Truxton, Batsugun), Raizing (Battle Garegga, Soukyuugurentai), Namco (Xevious, Dragon Spirit), and an assortment of other titles. The beat-em-up book will cover everything by Technos (including Kunio-kun and related series, and Double Dragon), Capcom (Final Fight), Konami (Teenage Mutant Ninja Turtles, The Simpsons) and Sega’s Streets of Rage. Much of this is already complete, but the big hang up here is the Kunio series, since we need to rewrite our old feature from scratch, and there are tons of games to be covered, including several Japan-only entries. To expedite this, I will be looking for submissions, so again, keep your eyes peeled in the near future.
And finally…
Patreon Backer Postcards
We’ve got five postcards with exclusively commissioned illustrations, featuring Rolling Thunder, Marvel Land, Gunstar Heroes, Yume Penguin Monogatari, and The Legend of Valkyrie. We’ll be printing these at the end of the month, so if you’d like them, make sure to register a $16 (or more) Patreon pledge before then!
Enjoy the holidays everyone!