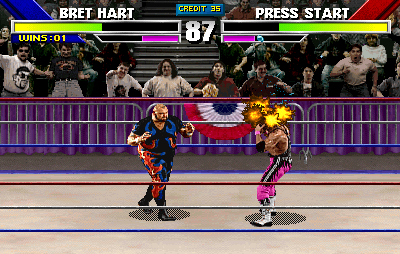 After the steroid trial and a storm of other allegations had dirtied pro wrestling’s name, the mid-90s were all change for the World Wrestling Federation. Out were the over-inflated physiques and in were the goofiest gimmicks imaginable, with a circus clown, plumber, garbage man, and Minotaur all making regular appearances. Midway, creators of the seminal Mortal Kombat series, acquired the licence to produce a WWF arcade game in 1995, and dialled up the daft in a game even more round the bend than reality.

Taking control of one of eight grapplers, you set out on the road to win either the Intercontinental or World Wrestling Federation Championship. These function as difficulty modes, with the WWF Championship having more handicap matches against more numerous foes. The wrestlers all have different stats, with the heavier wrestlers having stronger slams, and the likes of Bret Hart and Shawn Michaels having more agility. 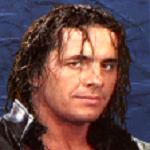 Bret ‘The Hitman’ Hart: “The Excellence of Execution” and multi-time champ is one of the most popular competitors of the 90s. 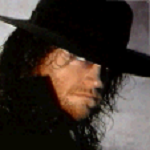 The Undertaker: “The Dead Man” strikes fear into his opponents’ hearts with his entrance, before finishing them off with his patented Tombstone piledriver. 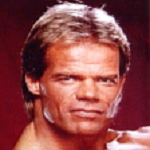 Lex Luger: An all-American patriot who remains a crowd favorite, even if his popularity hasn’t reached the Hulk Hogan-esque levels that have been hoped for. 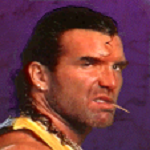 Razor Ramon: “The Bad Guy” is a toothpick-chewing anti-hero who, against all odds, is a hit with the fans. 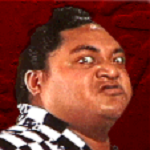 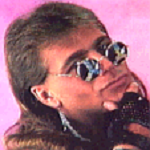 Shawn Michaels: A newly turned babyface, the self-proclaimed “Heartbreak Kid” is cocky, arrogant, and a frequent nemesis of Razor Ramon. 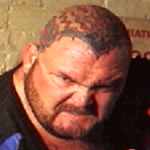 Bam Bam Bigelow: “The Beast from the East” with the distinctive flame head tattoos has been a formidable force across the world. 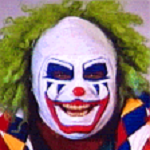 Doink the Clown: After being a heel for some time, Doink is now a good guy, and a frequent comedic thorn in Bam Bam’s side. 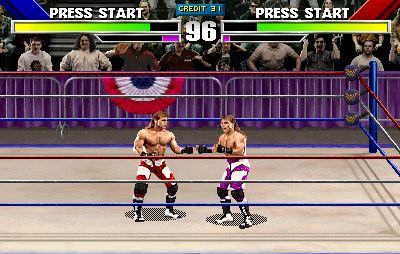 Blue-screened digitized sprites are used for the wrestlers and crowd in a similar fashion to the Mortal Kombat series. Compared to those games, the characters are a little smaller, and while animated well for the most part, occasionally lapse into Pit Fighter territory, with the poorly animated crowd in particular sucking the life out of the arena. However, the overall presentation is eye-catching, and any fan seeing it for the first time is bound to want a go.

The controls are also different to previous wrestling games, borrowing Mortal Kombat’s four attack buttons with another to block. You get a normal punch and kick, more powerful versions of the same, and entering toward, toward, and power punch grabs your opponent by the head, allowing you to smash ‘em with a normal or super combo, or hit a special move. These vary between characters, although all grapplers can launch into a run by pressing punch and kick together. You can take the fight to the outside or jump on your opponent from the top turnbuckle, too. With those basics down, the game takes a very odd turn.

Wrestlemania is as much an authentic depiction of pro wrestling as a match between Sub Zero and Scorpion is of the UFC. Moves and bumps are wildly over-exaggerated, with some maneuvers being completely out there: Shawn Michaels wields a baseball bat, Doink an electrifying giant inflatable hand, and the Undertaker can fire ghost-like hadoukens. In another deviation from standard rules, all matches are best of three rounds, and once an opponent is down you merely jump on them to win the fall, no three count required. The ring is huge, more similar in size to a basketball court from the NBA Jam series. Strike an opponent and they’ll shed objects, with Bret Hart spraying hearts and Yokozuna various foodstuffs. And “The Dead Man” even has his own fatality, with a casket being summoned, encasing his rival, and then descending into the ring, R.I.P. 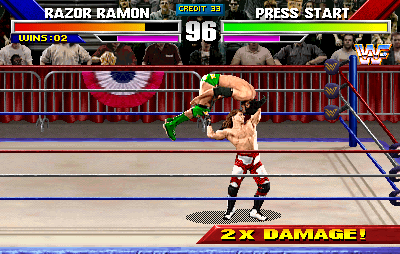 Complete the game and you get to see a character-specific ending, and they’re as barmy as the gameplay. Distinctly non-canon, the text sees Yokozuna’s win end American culture and industry, Shawn set upon by some sexually-charged female fans before deciding to become a politician, Doink’s firework celebration causing some elephants to stampede and squash a sizeable chunk of the audience, and Razor losing all his gold to four thugs, turning to booze, and going missing, before opening up a pawn shop.

The sound is almost as crazy as the grappling. Featuring original music as well as (finally!) sampled entrance themes, The Fink doing ring introductions and Vince McMahon and Jerry Lawler calling the action, the icing on the cake are the suitably meaty, cracky, and thwacky sound effects. Many of these elements play all at once, meaning the game stands out sonically as well as visually.

WrestleMania was ported to the Genesis, 32X, SNES, PlayStation, Saturn, and MS-DOS in 1995 as WWF WrestleMania: The Arcade Game. The Super Nintendo version fares the worst, with hideous slowdown, only three wrestlers on screen at once, and Yokozuna and Bam Bam Bigelow missing from the line-up. The Genesis is a bit better, with some really nifty chiptune renditions of the music, but has ugly, washed out graphics. Both the 32X and MS-DOS conversions are very good, with the pick of the bunch being the PlayStation and the later Saturn ports, even if they have no music during matches and problems with loading times. None of the home conversions include the arcade endings.

Yes, it’s goofy and off-kilter, and very much a different kind of wrestling game to… well, pretty much every other wrestling game. But it’s fast and zany, even better with a friend to laugh with, and fun as long as you check your brain (and expectations) at the door. A sequel, WWF In Your House, was released the following year for PlayStation, Saturn, and IBM PC. 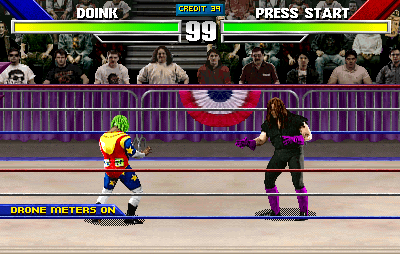 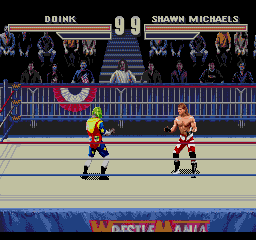 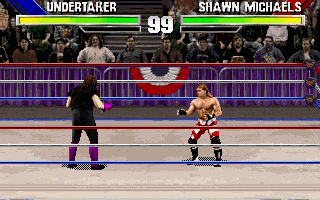 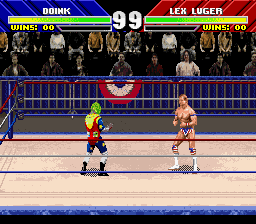 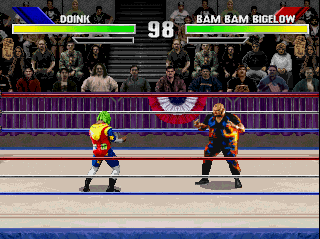 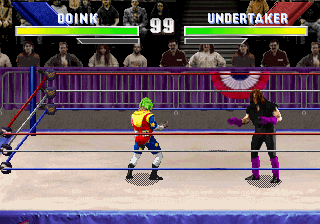 WWF In Your House