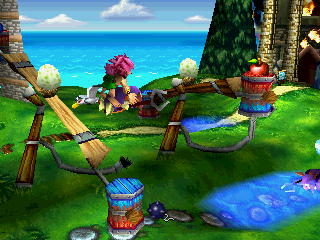 The sequel to Tomba!, subtitled The Evil Swine Returns, improves on a few important points. Most strikingly, the sprites have been replaced with 3D polygonal models. The camera is more dynamic, so it looks like a 3D platformer, even though it still controls on a 2D plane, except in towns. It looks messier than the original, but for a PS1 game it’s pretty decent, maintaining the same silly aesthetics of the original. Unfortunately, the frame rate has been downgraded from the 60 FPS of the original to 30 FPS, and the controls aren’t quite as responsive, but it’s still serviceable.

The story this time concerns Tomba being visited by a fairy called Zippo, urging Tomba to help his hitherto unseen girlfriend Tabby from the evil pigs. Zippo helps Tomba out by giving him clues and generally point out what to do in every single situation. However, like Zelda‘s Navi, this kind of character isn’t really needed, as it sucks all of the fun of figuring out things yourself, and is somewhat insulting to the intelligence of the player. 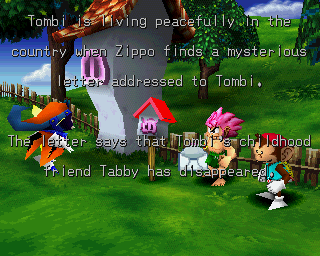 Tomba! 2 is a lot more linear than the first, with areas opened up one after another. This is both a bad and a good thing, depending on the player’s preferences. A good way to play this game is to simply go through the areas, and follow the story until the player reaches to the end. Then, explore each area again, getting the sidequests and finding the portals to the evil pig’s realm. Since the game is much more straightforward, the map is gone.

The events have become a bit more self-explanatory and less obtuse, including some minigames such as a mine-cart ride, a giant chicken washing minigame and mouse riding game. There are also no more events that can be lost forever and require the players to start over to get them, which is very welcome. The AP boxes no longer contain individual items, but rather gold pig snouts which are all used for a single quest late in the game. Something like that ruins the sense of surprise and diminishes the fun of the game greatly.

You can move between levels using an underground mine, which is opened up as soon as a certain pig is defeated. While it’s better than using the charity wing or Baron the dog from the previous game, it’s still cumbersome, as the mine is quite labyrinthine, with sprawling, identical looking environments. However, at some point you can find magical feathers, which make teleportation instantaneous. The menu is also more organized. Items are marked depending on what they are for, they can read descriptions and what has been said about them. The quest log also details which quests have been accepted, and which have been completed. 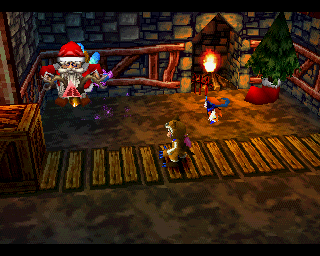 The basic mechanics are the same, though borrowing a concept from the later Super Mario Bros. games, Tomba can equip himself with costumes. The flying squirrel costume will allow him to glide, and the swimming pig costume allows him to more easily swim. There are also a number of pig costumes so you can converse with friendly pigs. The boss battles have been slightly redesigned. The arenas are circular, with the pig bag sitting in the center. It’s fairly easy to grab the boss and through them into the bag, though this time it takes multiple tosses before they’re defeated.

The level themes are just as weird as before. There are fire mountains, strangely right next to frozen tundra. But there’s also a circus hedged in between a forest and a mysterious water template. There’s quite a bit of nice world building, with a number of magical towers. They are quite hard to find, and requires helping adventurers to give the players clues about the towers, finding two parts of a spell for each tower and then chanting in front of the hidden entrance. Inside is a very hard level that gives the player a reward for completing it. The atmosphere in these towers are pretty great, especially the music, which is both tense and mysterious, almost a bit oppressive.

The North American and Japanese versions have voice acting, which is pretty amateurish. The worst of them is Charles the monkey, whose grating jabbers makes his asinine quests extremely irritating. In the original game he was a mischievous character that taught Tomba some neat tricks. In this game, he’s nothing but a simpleton that needs to be rescued several times. A good example is early in the game where the players find him starving. However, he will not accept regular bananas or any other food, he only wants baked bananas. The obvious clues would be that Charles would eat any kind of food, but instead, he desires baked bananas. It’s a throwback to the first game where Charles wanted banana juice instead of regular bananas, but at least his life wasn’t in mortal peril then. 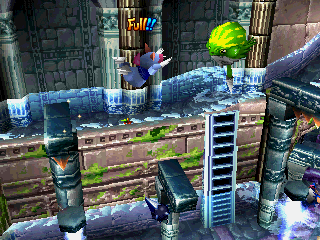 This game is a bit darker in tone than the last one. The evil pig ghost, who was quite lame in the last game, is now a rotting pig-zombie, who now has the ability to summon ghosts. There’s also a benevolent tribe of pigs that stands in opposition to the evil pig, which feels strangely nuanced for a game like this. The end of the game is actually rather scary. The replacement for the four old men from the last game is Kainen, an old man who is quite mysterious and is hinted to have dark powers of his own, but this is never elaborated upon. Presumably they were saving it for a sequel, which we sadly never got to see. If the last game was left unfinished gameplay-wise, this game is very much unfinished story wise, and it’s a shame that the developer could not make a third game to explain it all.

You can also import save data from the first Tomba!, which unlocks a couple of events and characters from the first game. It’s nothing special, but makes the game a little longer and is required for 100% completion. The events are longer and quite a bit harder, especially the search for the three hidden towers and the special weapons found therein. 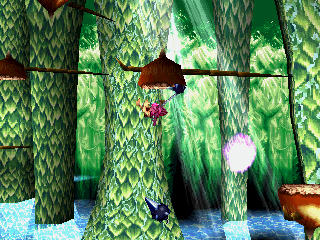 Strangely, the Japanese introduction video is different from the North American/European version. Both use some of the same footage but is edited differently, and has different songs. Tomba! 2 is available on the North American PSN, but unfortunately due to emulation issues, it’s actually the Japanese language version. It’s rather difficult to play, since you need to understand the quests to really play the game, and a few minigames are all but impossible. It also won’t read the save game file from the North American version of the original Tomba!, so that content is locked. The physical CD will still work on a PlayStation 3, albeit with some audio glitches. The European version on the EU PSN is in English.

Ultimately, Tomba! 2 has a lot of things going for it – the quest structure makes more sense, and it’s much less confusing in general – but the linear structure and arguably worse graphics make it feel like a step back from the first game.