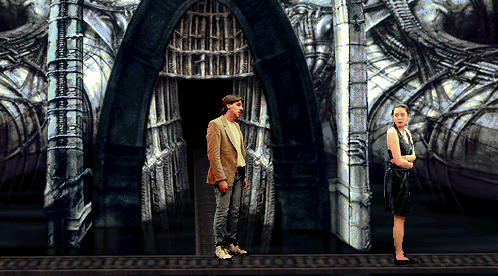 Dark Seed II picks up a year after the ending of the original. Mike has had the good sense to sell that old haunted house of his, but his experiences in the Dark World have left him disturbed and psychologically disabled, forcing him to move back in with his parents. His dreams of the Ancients continue, and neither the hypnosis nor the drugs from his therapy sessions seem to be working. The only light he has left in his life is a rekindled relationship with his former high school sweetheart, which abruptly ends when her headless body is found outside their school. Mike was the last person to be seen with her alive, and has no recollection of any of the events, leaving him as a prime murder suspect. Perplexed by the mystery, he once again finds his way into the Dark World, which has also again been subjugated by the Ancients. 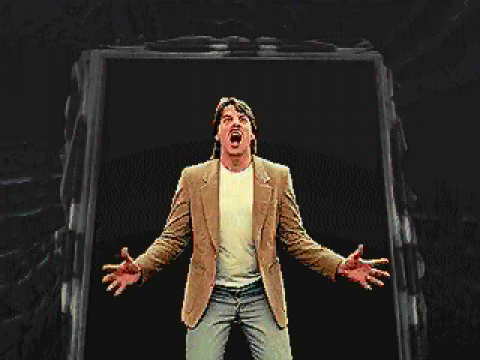 Their plan, this time, is to hatch a monster called the Behemoth to literally suck the life force out of the Normal World. However, this abomination can only be hatched with life energy from humans. As the first game established, the denizens of the Dark World cannot usually cross over into the Normal World, but they’ve created a being called the Shape Shifter which can skirt these rules, temporarily taking human form and mutilating its subjects for the mission. It’s clear that the Shape Shifter was responsible for Rita’s murder, but how will Mike solve this when he’s not only dealing with a murder investigation, but also his own psychotic breakdown? 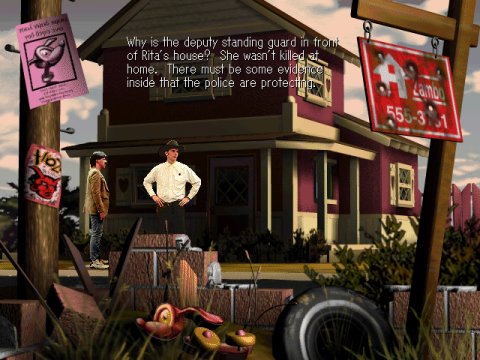 Dark Seed II makes such tremendous improvements over its predecessor that it practically feels like a whole new game. Gone are the time limits and dead end events, in favor of a more straightforward mystery. There are actual characters this time around, with plenty of background and dialogue, and the story is much more intricate than simply going into the Dark World and stopping the aliens, even though the basic goals are the same. The Dark World itself benefits the most from the improved narrative, as you actually get to talk to its denizens to further understand its culture, government, and how the invasion of the Ancients has totally ruined their civilization. While it does take away some of the disturbing mystery of the first game, the narrative depth definitely makes for a more involving experience. 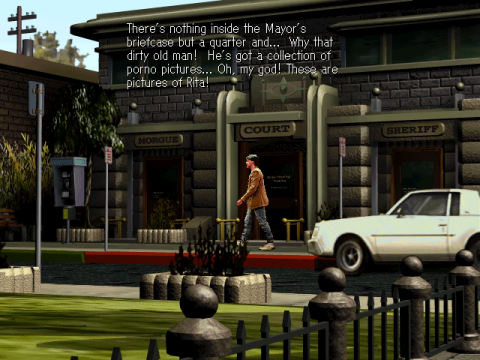 The investigations in the Normal World have been substantially fleshed out too. The first Dark Seed had a bizarrely entrancing atmosphere, but that seemed to emerge more out of ineptitude than anything else. In contrast, the town of Crowley, Texas, has a carefully telegraphed Lynchian vibe. Mike may have had good memories of Rita, but nearly everyone in town seems to have something against her, and there’s something deeply unsettling beneath the seemingly normal small town exterior. 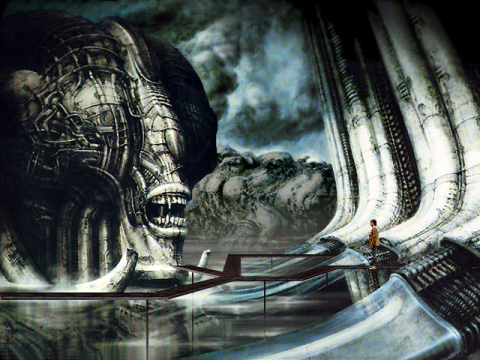 The technical improvements make for a much better looking game, even though it still has its quirks. The digitized sprites are back, and the animation is still incredibly choppy and unnatural, but the backgrounds in the Normal World look decent enough. Some of the scenes are peppered with images from the Dark World, visual clues that suggest Mike’s descent into madness. The Giger artwork is much more varied and detailed than it was before, due to the greater color depth, making it freakier than ever. That being said, some of the intended effect is lost, because digitized sprites are always going to look kinda weird when placed against what is clearly a painting. The voice acting is pretty uneven, with Mike clearly having a different voice, although a similar looking actor (the real Mike Dawson had no part in this game’s development). The music is much better though, as the main theme is appropriately creepy, with some light jazz peppering in during the trippier moments, likely a homage to Twin Peaks. 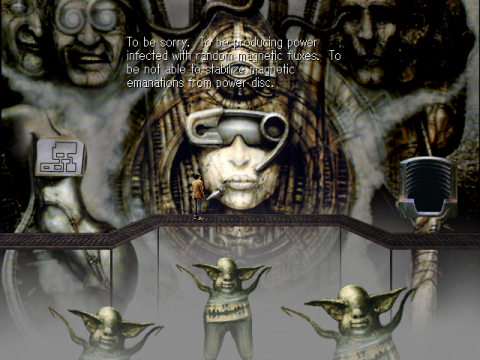 There aren’t very many puzzles in Dark Seed II, as most of the game is spent talking to the denizens of both worlds to uncover their respective mysteries. The few puzzles that do exist tend to revolve around the interplay between the Normal and Dark Worlds. Their implementation makes more sense than some of the stupider parts of the first game, but they’re still vague. A good chunk of them involve winning games at the local carnival, rewarding you with teddy bears. These adorable fluffy creatures become hideous monstrosities in the Dark World, and are used to solve a few problems for reasons that aren’t entirely clear. 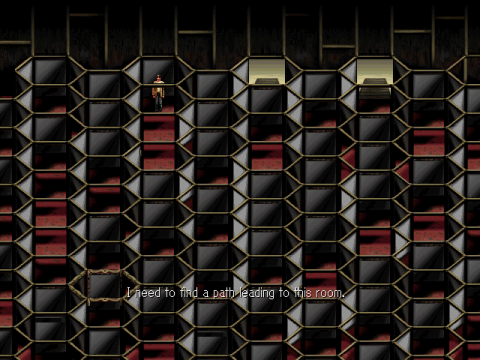 The worst puzzle is the mirror maze at the carnival, which is where you’ll find the portal between worlds. It’s frustrating because you can see the whole maze at once, broken up into hexagonal rooms, but there’s quite a bit of visual trickery to determine whether you can move between spaces or not. One has a locked door which is nearly impossible to see, others are one way doors which are equally hard to pick out. It becomes a tedious exercise in randomly clicking until you find your way through. Thankfully, once you’ve navigated the mazes – once in each world – you can skip right through them every time you transport between worlds. That is, until a segment late in the game where you need to race the Behemoth to the exit. In this case, you’d have better memorized the most efficient route, or else you’ll have doomed humanity. 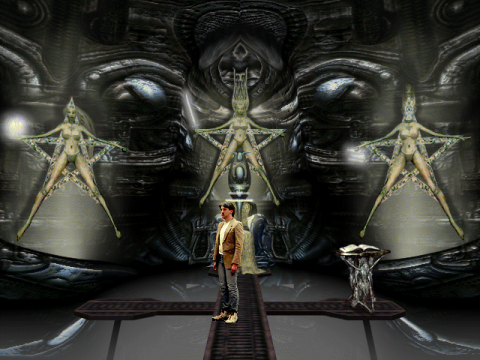 For the most part, Dark Seed II is fairly solid, up until its climax. It’s not the only horror adventure game where you play a mentally unsound protagonist, and it certainly won’t be the last, but how a story handles the border between reality and delusion is incredibly important. There’s an extraordinarily funny bit where one of the characters claims they will explain everything, then their head suddenly explodes, explaining precisely nothing. But then the ending goes out of control and just becomes crazy for its own sake. There’s a difference between ambiguity and being intentionally obtuse, and Dark Seed II takes the latter route, ending on a “what the hell just happened” note rather than one which inspires internal debate. But while the execution is sloppy, it shouldn’t sour the whole experience – there’s still enough freakiness to justify accompanying Mike through his descent into lunacy. 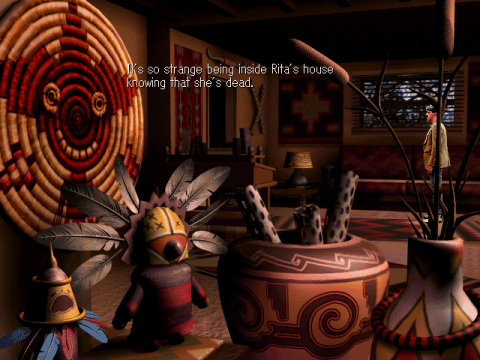 Dark Seed II was also ported to the PlayStation and Saturn, much like its predecessor. The resolution is halved, resulting in jagged visuals, and there are more load times. Most of the voice acting is cut out, except for Mike’s lines, which have been redubbed into Japanese. 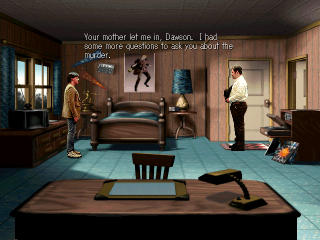 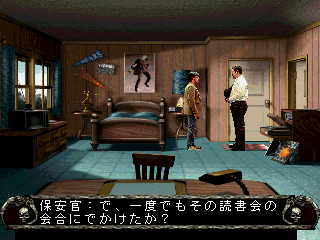