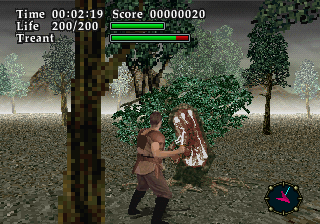 Hydlide attempted to enter the third dimension with Virtual Hydlide, released in the early days of the Sega Saturn, and published in the USA by Atlus. And oh, what a sad, sad game it is. It’s not entirely 3D, because while the environments are made of polygons, all of the objects – including your character, the enemies, trees and items – are all digitized 2D sprites. 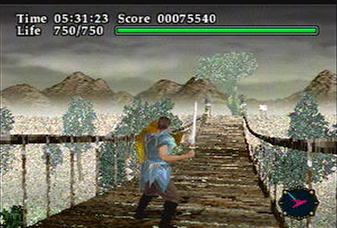 Virtual Hydlide tries to emulate the simplicity of the original game by ditching the character creation, class systems, morality meters and real time flow of the second and third games – the only real element retained are the shops and the weight system. In other words, it’s a pretty basic fetch quest. What makes it unique is that the landscape is randomly generated each time, theoretically allowing for completely different adventures. In reality, the quest is still structured the same no matter what, and the maps look practically identical anyway. At least you’re given guidance, in the form of both a compass and a full map, which both indicate the next destination. You spend a lot of time running around the huge, empty field, but eventually find your way into a castle, an underground cave, some old ruins, a volcano, and other typical dungeon areas. In a retelling of the original game, the ultimate goal is to collect three fairies, which hold the soul of the kidnapped princess, as shown in a cheesy live action video opening sequence. The term “virtual” is used very loosely here, because everything about Virtual Hydlide looks incredibly ridiculous. The frame rate is extremely choppy when running around the field, but drops into the single digit range any time you enter an indoor area – 3D was never the Saturn’s strong point, but there have been Jaguar games with smoother action than this. The camera often loses track of the protagonist in tight confines, making it nearly impossible to attack enemies. The main character sprite is very poorly animated, although in the game’s defense, each piece of equipment will result in a visible change. Still, there’s no way he won’t look like a total dork, especially with the light blue Fairy Plate armor. 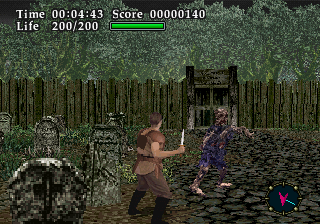 The combat is a total mess. Since all of the sprites are 2D, there’s absolutely no sense of depth, so all you can do is trudge up to an enemy and slowly slice at them, hoping your awkward attacks hit. Like the old games, you can heal if you stand still, but only on the overworld. Otherwise, you’ll need to stock up on herbs and antidotes. You only level up by completing story elements, but fallen enemies will also slightly increase your score, which can be exchanged for weapons, armor, and other items at crystals found around the land. 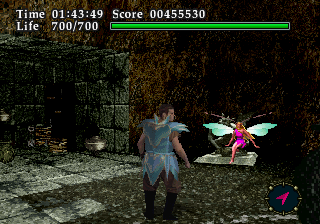 The actual quest is fairly short and can be beaten in a few hours. That’s okay though, because it’s hard to endure the game more than half an hour without getting a headache. Still, there’s a certain Z-quality charm in the whole ordeal, if only because watching your stiffly animated hero zoom across the empty, foggy plains at 10 frames per second is a remarkably trippy and strangely engrossing experience.