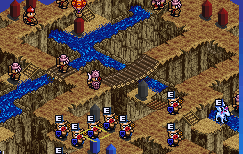 In 1997, Nintendo launched the flash cartridge service Nintendo Power for Super Famicom and Game Boy exclusively in Japan. These were special download machines, where one could pay money, typically for a fee ranging from ￥1000 to ￥3000, to download a game of their own choosing onto a cartridge. The service was continued until 2007 and new game releases were made until the year 2000, breathing new life into the Super Famicom until long after the release of the Nintendo 64.

Most of these games were rereleases of retail games, but some titles were newly developed for the service and exclusively released for it. Those titles are quite rare since they didn’t receive a retail print run, but only exists in the numbers they’ve actually been downloaded by customers. The most famous ones are probably the superb Super Famicom Wars from Nintendo or the last Super Famicom release, Metal Slader Glory: Director’s Cut from HAL. 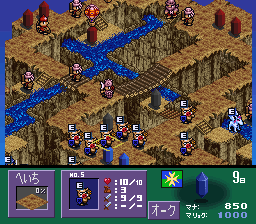 Genjuu Ryodan (“Phantom Beast Brigade”) is one of the titles exclusive to the system, but it’s fallen into obscurity, likely because it doesn’t have any popular franchise attached to it. At its release, the developer Crea-Tech was relatively well known due to their popular Metal Max series in Japan, but the game was not successful, making it almost impossible to obtain these days. It’s also mostly ignored by the Super Famicom fanbase, which is a pity, because it’s arguably one of the best turn-based tactic games on the console.

The story of Genjuu Ryodan is sparse, since the story is told through scrolling text between the missions, and stays pretty straightforward. Actually, it’s not even necessary to understand it to fully enjoy the game. It takes place in the fictional world of Vulcandra, where monsters and humans once lived in harmony together. However, things get serious after the antagonist Skullkaiser and his hellish army breaks out of the big volcano Nifelgap. The kingdom of Belborg uses the state of chaos over Volcandra to declare themselves to be the doubtful saviors of humanity and subjugate numerous smaller kingdoms. The player takes control of the “peaceful” kingdom of Earthring, which are on the edge of their defeat against Belborg.

Breaking everything down to the basics, Genjyuu Ryoda‘s gameplay is comparable to the Nectaris / Military Madness and Famicom Wars franchises. The player gets a certain amount of mana points depending on how many crystals on the map have been captured by their army, which in turn are used to produce new units. The player who captures the fortress of the opponent or kills all their units first wins the game.

The strength and health of each unit is determined by a numeral, running from 0 to 10. As they fight, part of the troop will die and their attack strength will deplete. Additionally, each attack (which are up to three, depending on the unit) has a limited amount of uses, comparable to Pokémon attacks. But before units die or become useless, it’s possible to reunite them with other weakened troops or to recharge them at the own castle and crystals. Units can move and perform one action per turn, and the movement and success of their actions can be affected by the kind of terrain they’re standing on.

Using the full 32 Mbit flash and 256kbit ram of the Nintendo SF Memory cartridges, the game offers a completely different depth compared to many other 16-bit tactic games. There are also a total of 35 missions are available in the single player-campaign alone. On top of that, each of the mission maps which have already been completed can be played in a two player-mode, adding a ton of replay value to the game. After some missions, the player can also choose which of multiple available missions they want to tackle first, making progression somewhat non-linear.

Being pretty complex, it should be rather obvious that Genjuu Ryodan is hard to get into, but the developers of Crea-Tech used an innovative, yet simple method to make sure the learning curve stays enjoyable instead of overwhelming the player. You start the first mission with only three basic units and get new ones after each mission. The enemy from the respective missions usually uses exactly these kind of forces and “demonstrates” their usage and values to the player. Usually, the enemy also gets a slight advantage from them, making it extra interesting and rewarding to the player to finish the mission to obtain the new units. Once they’ve been obtained, the player can customize his (up to 20 different units) “deck” by adding them to it. There is also a running “high score” which represents the total of turns taken for each mission, which makes it worth to revisit old maps with new, stronger troops in order to polish their high score. If a certain unit has been discarded, it is possible to obtain them again from the previous maps if their presence in your army is beneficial for another mission.

The variation of different units and the many possible ways of approaching the missions is lends to an extremely in-depth level of strategy. Some troops are cannon fodder, perfect to capture game-deciding crystals on the map as fast as possible, and others are defensive units which can produce mana themselves. Some units attack from far range or can walk extra far each turn and others boot incredibly strong stats or special attacks which can only be used in very limited numbers before recharging them. There are 65 different unit-types, each with different attacks, such as physical/magical, different kind of elements and special skills. Some more examples include magicians, crystal creating shamans, calvarymen, and support units which can restock your troops. There are also beasts – the eponymous Genjuu – like dragons, birdmen, undead, treefolk, witches, djinn and pegasi, plus many many more. Weaknesses and strengths are also present, as archers are, like Fire Emblem, effective against flying enemies, and mermaids take the advantage over most enemies on water terrain. The creativity and effort put into the huge array of different forces are definitively outstanding.

Every map in Genjuu Ryodan requires a unique tactic from the player and the game can get extremely challenging later on, with numerous possible unit choices and the sometimes frustrating advantages of the enemy. For example, the computer can have access to flying or swimming units, or extra powerful ones which cannot yet be accessed by the player. This way, it can attack your base and crystals by quicker routes, so you need to figure out the weakness of the stronger units to stand a chance. But thanks to the unit-collecting and the overall great game design, it keeps his addicting nature up to the end. 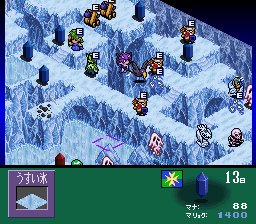 In terms of visuals and sound, Genjuu Ryodan utilizes an isometric perspective like Tactics Ogre and Front Mission. They’re not the best on the Super Famicom, but they’re still decent, with enough dedication to small details in the sprites and on the maps, while also maintaining a good overview for tactical planning. The music focus mostly on atmospheric tracks and fit well to each kind of location. And while the tone of the story sounds pretty dark and tense, the overall feel of the game really isn’t. Most of the troops sprites and their animations are almost too cute to take the atmosphere of the story very seriously.

Getting a hold of Genjuu Ryodan for your collection can be extremely difficult and expensive since it’s only present on SF Memory cartridges which actually downloaded the game back in the day. There is no fan translation available up to this date, but the language barrier of the game is fortunately pretty low.