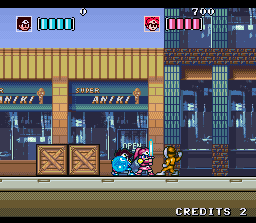 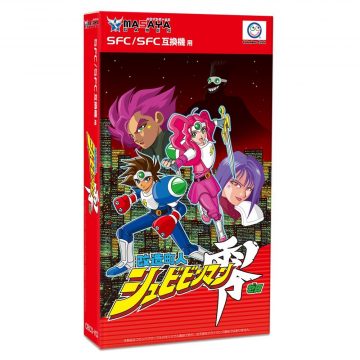 After three games on NEC’s hardware, NCS/Masiya wandered off and produced the next Schbibinman title on the Super Famicom. It was created in 1994, but didn’t see a release until 1997, when it became available via download from the Satellaview, which was the Super Famicom’s equivalent to the Sega Channel. The fates of Tasuke and Kyapiko are left unknown, and the game features two new heroes named Raita and Azuki. The new Schbibinman must battle against the B.B. Dan Battlemizers, a force of goons lead by the obnoxious Galko and her trusted henchman, Kagemaru.

Following the trend of the series, Schbibinman Zero is completely different from the previous games. Now it functions more like a beat-em-up, but it still controls like a platformer. The two heroes are quite different this time around. Raita uses boxing maneuvers and Azuki uses the classic Schbibinman sword. Both characters still have the ability to charge and unleash the Schbibin Buster, only now it has a new purpose in 2-player mode. When both players charge their Schbibin simultaneously, and one character fires and hits the other, they will be energized from the blast and flash white for a few seconds. If the other player fires their Schbibin during this period, they will unleash a Super Schbibin Buster, a devastating attack that can cripple even the strongest bosses. The two characters each have their own unique Super Schbibin, and this new element adds a whole new level of teamwork to the 2-player game.

The level design is better than ever. Many of the stages are multi-tiered, offering the ability to move up and down between the different heights of the stages, which makes it possible to get the drop on enemies from above or below. The boss fights are more intuitive and the bosses themselves have complex patterns. It’s no longer just a shoot out. This offers a lot more challenge. Also boosting the difficulty is the very limited health bar. At first, you can only take four hits before you die, and you only have 3 continues to use, which must be shared with the partner in 2-player mode. Fortunately, as you run through the stages and collect a myriad of bonus items, you’ll gain experience points and level up, which tacks on another hit to the health meter.

The graphics are pretty bland, but this is typical of a Satellaview game. The sprites have smooth animation, but overall, they’re rather ugly. The stages are somewhat boring and static, and only a few have multi-layered backgrounds and parallax scrolling. (The first stage does have some stores called “Super Aniki”, a reference to NCS’s Cho Aniki series.) The music is fairly catchy, like in all the previous titles, but going from CD format to chip-based sound hardware is a difficult thing to accept, even though it does sound nicely like a Mega Man X title. Despite the lax presentation, the great gameplay makes Schbibinman Zero one of the better games in the series, if not the best, and one of the few good games available on the Satellaview. All in all, Schbibinman Zero closes out what was one of NCS/Masaya’s best franchises.

For a long time, outside of getting a Satellaview cartridge that had Schbibinman Zero, there was no way to legally own this game. However, in 2017, the retro game company Columbus Circle obtained the rights and published a physical release, complete with box art, manual, and cartridge.