Brandish 2 is subtitled The Planet Buster. This is the name of a sword so powerful it can annihilate an entire planet. As it turns out, this is the very sword Ares obtained at the end of the original Brandish. Unfortunately for him, some nasty king wants it for his own purposes. While adventuring, Ares ends up collapsing in the middle of the desert and is captured by his enemies, only to eventually be rescued by Dela. From there, the journey to reobtain the Planet Buster begins. 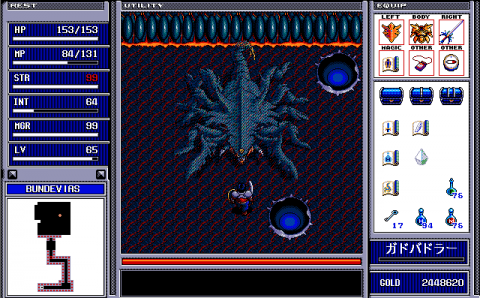 Brandish 2 plays very similar to its predecessor – the interfaces for the PC versions are nearly identical, except that boxes around your character have been added in order to aid mouse control. This sequel simply expands things a bit, by adding a greater variety of levels, to make things feel a bit less repetitive over the game’s 22 stages. There are also many more NPCs beyond just shopkeepers, and the plot is more closely intertwined with the exploration, making it seem less like a straight dungeon hack. Along with this, there are also optional subquests. There is also the ability to dual wield equipment, including having two shields. The music is catchier, including lots of memorable dungeon themes and one of the best game over themes ever. 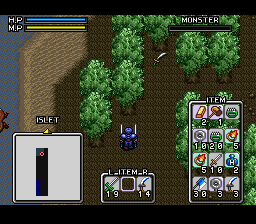 This goes doubly true for the Super Famicom port, again ported by Koei, which does an excellent job of upgrading the PC-98 synth, and is one of the few times when a non-CD rendition of Falcom music actually ends up superior to the original FM synth tunes. Koei finally added an on-screen automap, although it only shows portions of the level (you still have to pause to access the full thing), and the gameplay is much smoother than the first game. Some of the maps have been removed or replaced, as the prison area in the beginning has been drastically shortened, and some of the cinemas (like the intro) have been scaled back. The graphics are also a bit too dark, making it hard to see certain obstacles. Otherwise, the various improvements make this much more bearable than the 16-bit console ports of its predecessor. Much like the Super Famicom release of Ys V, Koei later reissued the game with a harder difficulty level under the title Brandish 2 Expert. 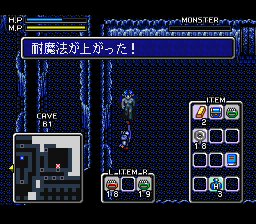 Both versions of Brandish 2 have been translated, with the SFC version by Synchronicity, and the PC-98 version by Gu4n and preta. 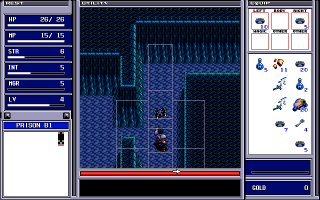 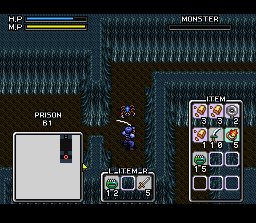