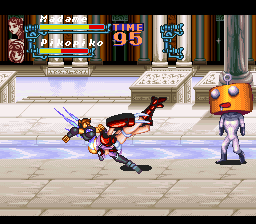 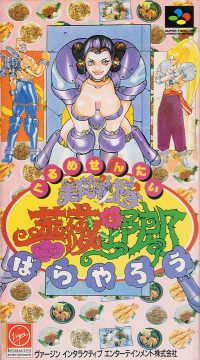 The Cho Aniki series is world renowned for its ridiculous sense of humor, much of it centered on musclemen in speedos but also in reveling in chaotic insanity. Its original developer, Winds, tried to branch out a bit, and transplant that same kind of weirdness from a shoot-em-up to a beat-em-up. That attempt is Gourmet Sentai Barayarou, released for the Super Famicom in 1995.

The story takes place in the distant future, where people are surrounded by technology but have little food to go around. This becomes a big problem when a villainous organization (possibly named “Bath”) steal the world’s entire supply of protein for themselves. To combat this, three powerful robots are built to go and stop this organization: the buff Bonjour, the fierce Mademoiselle, and the hairy Trés Bien. 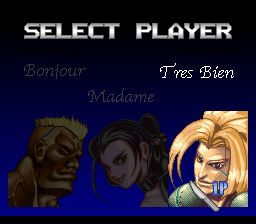 Gurume Sentai Barayarou is a typical side-scrolling beat-’em-up where you fight a succession of various enemies. Like most beat-em-ups of the day of the 16-bit era, your move set is pretty small – a four-punch combo, a jump kick, a pair of throws and two short-range explosive attacks. They don’t do much damage (nor do they drain any of your health) but they can be used as fend off floods of attackers. When beating up enemies, sometimes they get stuck into the ground head first, with their bodies sticking straight up, allowing you to pummel them a few extra times.

Unfortunately, the lack of weapons means that combat can get quite dull pretty quickly (this is especially a problem when enemy health bars take so long to whittle down, even on the easiest settings). You have three characters to choose from, but the differences between them are so minimal that it doesn’t really matter. At the very least, you can get a surprisingly competent CPU ally to help you out, though this does feel like a quick work-around to compensate for the game’s weirdly inconsistent difficulty. 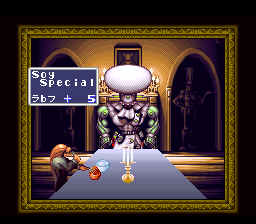 The big gimmick, as indicated by the “gourmet” in the title, is the cooking system. Every enemy defeated leaves behind a food ingredient, which can be used to cook a meal to restore some of your health in between levels. This is important because there are no other curatives and your life is otherwise not replenished at all between stages. Just randomly sticking ingredients together probably won’t generate anything all that useful, but if you have a guide, you can create dishes to completely max out your life meter. Each of the three characters also has different preferences, so you need to know what dish to cook based on who you’re playing as.

This is an interesting idea, but it’s rather (ahem) undercooked. It’s not like there are any other stats that are boosted by consuming certain foods (a la River City Ransom), so it feels like an extra system tacked on to force you to earn something that most other games just give anyway. Plus, without an outside source, it’s mostly guesswork putting together something your fighter will like. 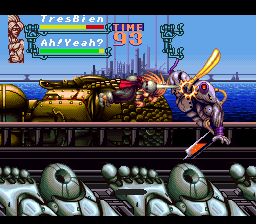 You have no lives or continues, so you get sent back to the title screen when you die, but you can continue from the section where you died immediately afterward.  The hardest boss in the whole game is actually in the second level, almost entirely thanks to its gimmick of draining your health to restore its own, and the overall challenge feels all over the place.

It’s not as if the game is terrible, mind you. The combat is competent, everything is well put together on the technical side, and it feels satisfying, at least from the outset. But upon playing for more than a few minutes, just feels uninspired in the gameplay department. Which may make sense, given that a good degree of attention was devoted towards the game’s strange tone and visuals. 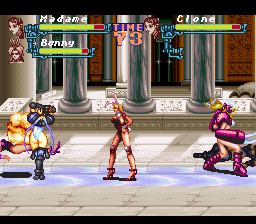 You fight a selection of odd enemies, like self-detonating musclemen and mechanized Moai heads piloted by tiny people. (Said tiny people will then attempt to fight you even though they’re only a few pixels in size and can easily be stomped on.) The bosses are even stranger, with bizarrely sexualized robots that crawl around on the ground and mad magicians lurking inside what looks like the guts of a giant monster among them. This weirdness seeps into the cooking mechanic, with a robotic chef who takes a mix of ordinary and disgusting ingredients (e.g. scallop natto) to whip up a meal that could either help or harm you (seriously, you can cook poison mushrooms that leave you at 0 health when the next level starts). In fact, the barmy tone even extends into the real world, as the game came with a comment card which asks, among other things, “Why did you buy this game?” – one of the options being “I made a mistake”.

All this is largely why the game has remained alive in some small circles since its release, but while you get some amusing sights and characters, it doesn’t work quite   as well as it wants to. Humor is subjective, of course, but the issue is that Gourmet Sentai Barayarou doesn’t go far enough with its flavor of oddness.The game’s enemies are a bit weird, but only a couple of them seem actually inspired in how bizarre they are. Otherwise, most of them wouldn’t seem too out of place in more grounded beat-em-ups. But in this supposedly wacky game, they’re not as crazy as they could be. The environments aren’t anything special either. 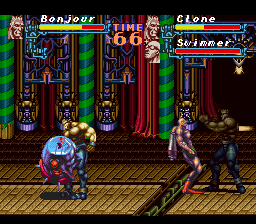 What doesn’t help is that there are only a few types of enemies, so even if they were odd or interesting from a design perspective, they’d become boring after fighting them over and over again. And that boredom extends to the lack of any real escalation in terms of stakes or nonsense: a lot of the game’s weirder imagery appears in the first few levels, meaning that the climax doesn’t have anything truly baffling to build to, and therefore isn’t particularly memorable.

One of the few inspired bits is on the third level (and only on the easy difficulty), which takes place in a lavish mansion full of women in sexy bunny-themed suits. It’s an obvious nod to the infamous Playboy bunnies, when the end level boss turns out to be a mechanized Playboy bunny (which ends up being a transformed tanuki). There is a way to feature ludicrous nonsense and make it so bizarre that it becomes legendary, a like either the Cho Aniki games or other parodies like Konami’s Parodius, but Gourmet Sentai Barayarou doesn’t quite pull it off.

Otherwise, the presentation is unremarkable. The visuals look somewhat appealing, and the framerate’s consistent, but that’s about it. The same can be said for the music: it’s not awful, but the sound effects lack that kind of punch that makes combat so enjoyably visceral (see: Streets of Rage 2‘s excellent sound design) and the music is forgettable, lacking in drive and suffering from mediocre instrumentation. 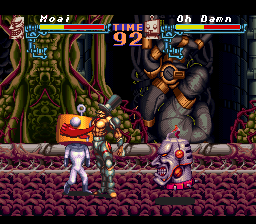 Overall, Gourmet Sentai Barayarou feels like a game that needed more time. It needs more balancing to make enemies’ health easier to whittle down, more types of enemies to fight to keep the mad pace going, more thought put into the insanity to make it truly effective. Even the Cho Aniki games (especially after the first) had rather mediocre gameplay but kept up the silliness enough that made them somewhat worthwhile, but this just lacks that same type of comedic energy. It’s clear that there was passion put into this game (for instance, there are cheat codes you can input to play as any of the enemy/boss characters), but the core game just can’t inspire that same level of passion from the player. It’s worth playing once for the handful of chuckles it will probably elicit, and that’s about it.

Gourmet Sentai Barayarou was never released outside of Japan, as it’s the type of game that would’ve been way too weird to the American market. but it did receive something of a fan translation by the Aeon Genesis Translation Group back in 2000. It only translates the character and food names, so the story and menu options are still in Japanese. Bizarrely, the game received something of a second life in late 2017 when Piko Interactive, a company that specializes in creating new games for old consoles; often acquiring and re-releasing very obscure or previously unpublished games, got the rights to it and re-released it on the Super Famicom in early 2018.