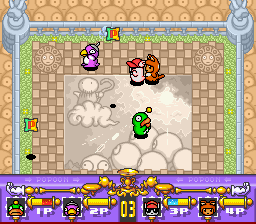 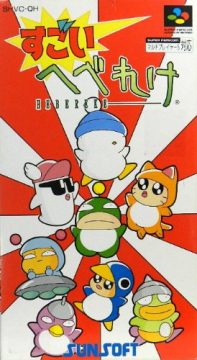 Before Sunsoft developed their trilogy of 2D fighters, before there were bros to smash and brawl with, there was Sugoi Hebereke. This is an arena fighting game wherein Ucchii’s various creations kick each other’s asses for no adequately explained reason. But to be fair, they never needed one in the previous games. 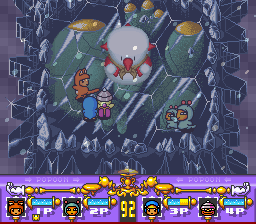 “Just what IS this frozen thing under us?”

The arenas are square-shaped, seen from a top-down view, and feature a few environmental hazards as well as the intervention of a couple enemies from Ufouria every now and then, which will either hinder or help by dropping some items. Every character can use up to two of his/her usual special moves, for the first time directly against their friends – just why they always have to fight each other is never explained. The arenas represent the usual places featured in all previous games, such as O-Chan’s mansion, Bobo’s nest, Utsu’s base/planetoid, and so on.

Defeated characters are turned int Popoons, but it’s just for flavor since they can’t even be picked up. Once again, the final fight pits the player character against three Hebe doppelgangers.

The graphics are pretty nice, with the arenas seen in several weather conditions (with fog, lightning, snow and so on). The critters have several goofy animation frames to show, for example when they’re dizzy or hit by the special attacks (did you know that ghosts can be electrocuted and also have bones inside?).

The soundtrack is eclectic to say the least, with some random electric guitar samples and other weird sounds. The gameplay is very bare-bones and easy (there’s no ring out or other penalties). It’s still a fun game when played with some friends and a multitap. Otherwise it’s just a short and shallow experience. Sunsoft was certainly more successful with their traditional fighting games, but they brought back Sugoi Hebereke for their series of mobile games.