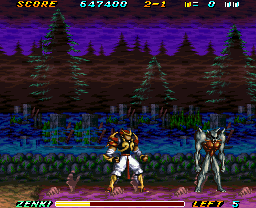 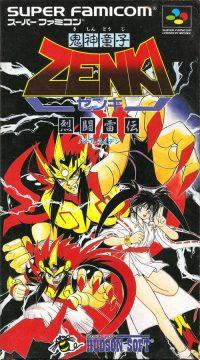 Starting in 1992, Kishin Douji Zenki (or Demon Child Zenki) was a manga serialization in Monthly Shounen Jump. Wikipedia and other sites claim this apparently ran to 12 volumes, ending in 1996. In 2005 a company called Bamboo Comics re-released these as 7 volumes. Irrespective of the number of volumes, it spawned an anime series for the duration of 1995 (from January to December if online sources are correct). Some say there were 51 episodes, the now-defunct official Enoki Films website claims 52 at 25 minutes each. In 1997 there also appears to have been an OVA.

The story, very broadly speaking, is your standard modern-fantasy hokum mixed in with a bit of Dragon Ball. Over a thousand years ago a sorceress named Ozuno (sometimes Ozunu, or even Oz-Nay) battled evil with the help of guardian deity Zenki, and they defeated the evil demon queen Karuma. Afterwards Ozuno seals Zenki in a pillar/monument/shrine. Fast forward to today and Ozuno’s descendant Chiaki (aka: Cherry) summons Zenki to save her. Since he takes the form of a child, she has to use a magical bracelet to turn him – Super Saiyan style – into his more powerful form from the past. As luck would have it Karuma’s evil is also back, in the form of seeds which look like giant eyeballs, and which Zenki must destroy… Or something along those lines. As expected there’s a diverse roster of secondary characters which appear throughout the series’ various iterations.

Of course we’re not here to talk about the manga and its anime offshoots, rather the five video games they spawned, all released in a seventh month period between August 1995 and February 1996 (so therefore likely intended to coincide with the anime series). All of them are extremely obscure, with the best known possibly being Vajura Fight for the PC-FX, by virtue of its high price and legendary status on a system generally lacking in decent games (don’t argue, NEC’s PC-FX was a failure no matter how you cut it). They’re also all rather interesting, not only in terms of aesthetics and mechanical design, but the companies which actually made them.

As you’d expect from a licensed property, many hands were involved with development of all the games. The title screen of the first SNES title (Battle Raiden) lists Hudsonsoft, the publisher for all of the games except the GameGear version, which was published by Sega. Next to it is Kikuhide Tani, the original writer for the series. On the next line is Zenki‘s illustrator, Yoshihiro Kuroiwa. Then Shuheisha, the manga publisher, and next to them Kitty Film, which was involved with the anime. Lastly is TV Tokyo. Nowhere on this screen does it mention the actual developer, Computer Artist Production (they’re a game development company based in Nagasaki with strong links to the Hudson of old). Listed on CAP’s website the first game they developed seems to have been Hagane – certainly it bears a visual similarity to Battle Raiden, which came out a year after. The company also developed Sapphire for the PC-Engine, and Sky Odyssey, one of the best overlooked gems in the entire PS2 library. 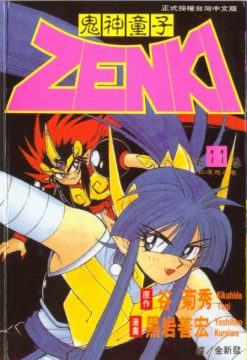 Other Zenki releases add more companies to the mix, including K-Factory which was also involved with the anime, but it seems Hudson used a different developer for each version and, given the short window of the releases, all likely began development around the same time. This is obviously speculation, but given how poorly documented the games are, even in Japanese, it’s not easy getting any information, let alone something reliable. Even when viewing the ending credits to some of the games, it’s not always clear which company was behind it.

What we’re left with then are five games of varying quality, on three separate systems, and little other information – a group of binary relics which only hint at the complex licensing deals behind them, and are guaranteed never to see re-release.

The first released Zenki game, developed by CAP, and their third title after Hagane and Sapphire. As mentioned it does look similar to Hagane, with some striking backgrounds and terrific renditions of cloudscapes – the company’s pixel artists clearly knew what they were doing, since all the backgrounds in Battle Raiden look absolutely gorgeous, almost like an oil painting in motion. The gameplay though feels totally dialled-in and nowhere as interesting as Hagane. Which isn’t to say it’s bad, since this is one of the best entries in the series and, in some ways, is even better than Vajura Fight on the PC-FX. It’s just really, really functional, without trying to be too inventive. It’s also much easier. Perhaps they were relying on the brand name to make it sell?

Throughout the game you only ever control Zenki himself, though Chiaki does pop up in cut-scenes to turn him into his Super Saiyan form. Zenki tends to alternate between forms, starting off small, beating a stage’s mid-boss, and then becoming big for the secondary stage and final boss, after which he usually shifts back into a kid. You’ve got an attack button, which needs to be rapidly tapped to pull off combos, and a jump button, which can be combined with attack for some flying kicks. There’s also a back- and forwards dash, using L and R, though it’s seldom if ever needed. Generally the controls are slow and clunky; the walking speed of Zenki in either form is like molasses, while the jumping feels stiff and weighted. There are a fair few platforming sections, but they’re generally quite easy and don’t require much precision.

In a powered-up state you also have access to a Power Bomb move, represented by the scrolls in the upper right corner, which attacks everything on screen and depletes a large portion of any boss’ HP. The catch is it also drains your own energy, and three consecutive uses drops you down to a tiny sliver. Although these attacks can be replenished by collecting items around the stages, you’re almost always better off never using them. Unless of course a boss is on its last legs, in which case bombs away. Powered-up Zenki can also perform special moves while holding the d-pad, for example activating a powerful tornado attack while pressing up, that can attack flying enemies. 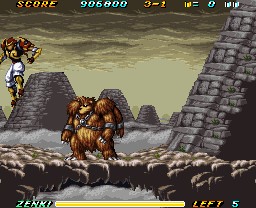 The most inventive thing about Battle Raiden are the stage layouts. While at first you’ll usually be moving from left-to-right, aiming for the exit, once reached you’ll get a dialogue box explaining how a series of shrines need to be destroyed to drop a force-field. These will then immediately pop up behind you, and as you destroy them parts of the stage will change. To begin with most are a straight run, and you can sort of see platforms too high to reach in the distance, or sections you can’t get to. But as some shrines are broken a set of floating platforms will appear, or the layout will change in other ways. It’s actually a neat idea, adding some mild exploration to things. The problem is in a couple of stages which are quite long, and it’s tedious having to backtrack to a wall which you clearly knew you’d have to go through eventually. The diversity between stages helps though: one moment you’re in an eerie forest, the next an underground rainbow cavern. Then you’re on a snowy mountaintop, afterwards a misty graveyard, followed by a high-speed run over wooden logs on a rapidly flowing river. The lava shrine and mythical palace in the heavens are another two especially fun levels to play through.

Overall it’s a very easy and therefore short game, with only two notably tough points. In the later stone forest, full of flying insects, don’t worry about fighting everything, just run as fast as you can to the end before your health runs out. Finally, the very last stage has a gruelling corridor of endurance, filled with dozens of rapidly spawning enemies. Just take it real slow and don’t be tempted to Power Bomb your way through. Otherwise you’ll soon reach the boss at 5-4 and clear it – probably in an afternoon.

In a lot of ways Battle Raiden is like any number of good-but-not-fantastic action-platformers that were released during the 16-bit era, such as Xardion, or Psycho Dream. It has really fantastic 2D artwork, decent music, mixed with some good ideas but clunky implementation and controls. Given the number of much better games available for the SNES, the temptation could be to condemn Battle Raiden… And yet it has a peculiar charm; an esoteric aura. It’s the kind of title you’d read about in GameFAN, back in the day, and then import for your Super Famicom. Perhaps then you’d invite friends over to marvel at this oddity from Japan that would never get a western release.

Also, while production values in the later released Vajura Fight are much higher, it’s worth stating this is the more substantial game. There’s some great diversity between levels, and it just feels like there’s more content to its 5-point-4 stages (though there probably isn’t). Although the animation is less fluid and there’s only one character to control, it feels like a proper and lengthy adventure, rather than a series of brief one-on-one fights. While Vajura Fight will be finished in about 30 minutes on your first play through, this will probably last a couple of afternoons on a slow weekend.