Technosoft’s Thunder Force games are some of the well most regarded shooters on the Genesis. However, nestled between the release of the third and fourth game lies Elemental Master, a fantasy themed shoot-em-up with an overhead perspective and a human wizard character.

Elemental Master casts you as a wizard named Laden, who must gather magic strength before fighting the demonic forces of the evil Gyra. Unlike Mercs or any number of run-and-guns, the screen scrolls upwards automatically. The A and B buttons are used to fire forwards and backwards, while the C button switches between magic powers. At the beginning, you only have a straightforward lightning attack. Though there’s technically no rapid fire, each button press unleashes a torrent of shots, so you don’t need to jam to the buttons too hard to keep up a steady stream of projectiles. 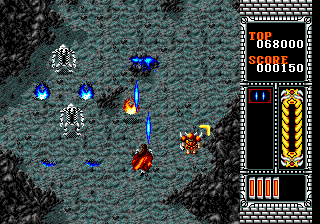 You can pick from four levels to conquer, and completing each will unlock a new type of magic, each roughly corresponding to one of the four elements. Additional weapons include three-way fire attack, a wave shot, a powerful laser-like quake attack, and a multidirectional wind attack. By holding down the button, you can unleash a powerful attack, at the expense of being defenseless for a few seconds while they’re being charged. Beating the fifth level will unlock the charge ability for the default double shot magic, which is an extremely powerful laser blast and is the most powerful attack in the game. There are seven levels altogether, and while most of the last stage is a mere boss rush, the charged laser blast is enough to make short work of most of your opponents. 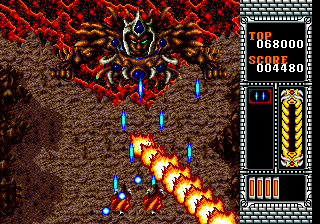 At the outset you can take four hits before being killed, though you only have a single life. Grabbing chalices will expand your maximum life bar by one, up until eight hit points altogether. Combined with the abundant healing items, this might make it seem like your wizard is extremely powerful, but it’s easy to get careless and expend all of your health in a short period of time. Part of this is due to the extremely short invulnerability period, but it also has to do with the narrow terrain. A fourth of the screen is devoted to the status bar, and many of the levels feature impassable mountains trees, and other obstacles. It’s very easy to get boxed in and savaged, especially since enemies attack from all angles. You also have to deal with environmental hazards, like the flames that ignite from the crevices of the volcano stage, or spinning ball and chains. You also have to deal with the clumsy movement across ice or slow movement while trudging in water. 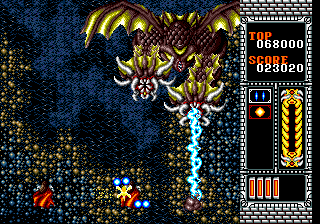 Still, it’s never overwhelmingly hard, at least at the Normal difficulty. The Practice difficulty lets you play a single stage with a full weapon loadout before demoting you back down to your regular power level, while the higher difficulty levels prove greater challenges for shooter experts. These ranks require that you prioritize charge attacks in order to deal with the density of enemies. The option menu is hidden though, accessible by holding A and hitting start on the title screen. 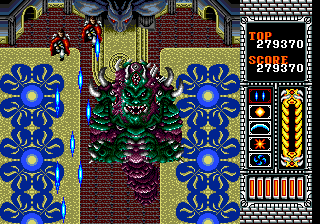 Elemental Master isn’t quite just an overhead, fantasy reskinning of Thunder Force, but there are enough commonalities that show they were developed by some of the same team. Enemies attack from all angles, so you’ll routinely need to switch between the five magic spells in order to deal with them. The fact that you’ll never lose any of the weapons once obtained is a smarter design decision too, even if it does make some of the earlier stages a little more difficult. The fast pacing is similar, and most enemies take a few hits to kill. 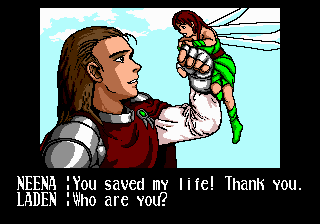 The similarities are most evident in the sound design, especially since they reuse many of the same sound effects. But it’s especially noticeable with the music. The soundtrack was composed by Toshiharu Yamanishi, who worked on Thunder Force III and IV, and uses the same distinct sound driver. Each boss has its own theme, but the standout pieces are the level songs, some of the most shredding rock music every pumped from the Genesis’ FM synth, the perfect accompaniment for a heavy metal fantasy setting. It easily ranks up next to MUSHA as some of the best of its type on a 16-bit platform. 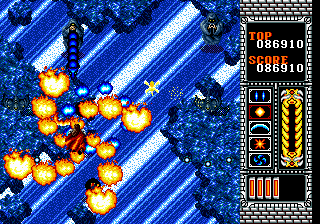 The graphics don’t carry quite the same level of distinction. They’re a little too dark and murky, and outside of the fantastic boss designs, the sprites are somewhat indistinct. Laden’s running animation also cycles too quickly, making his trudging seem a little goofy, especially when the screen scrolling stops and he seems to be marching in place. 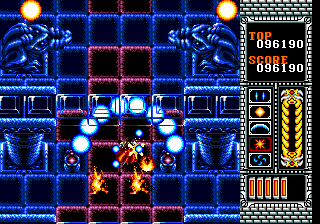 Even though it never attained the popularity of its more traditional sci-fi brethren, Elemental Master is nonetheless one of the many high points of the Genesis shooter library, and if nothing else, is a fantastic example of what the system’s sound chip could do in the proper hands.