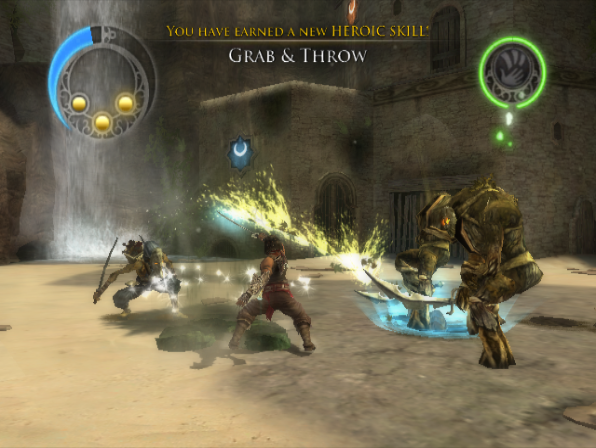 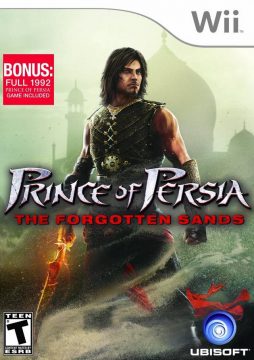 The second biggest game that bears the title The Forgotten Sands, by Ubisoft Quebec, came out exclusively on the Wii. It had almost become customary to create quite different Wii-Versions of big name titles with last-gen technology (see Ghost Busters or Star Wars: The Force Unleashed), and in the same vein Prince of Persia: The Forgotten Sands on the Wii also uses the good old Sands of Time engine. But in this case the “port” differs more than usual from the HD versions, as it is an entirely separate game. 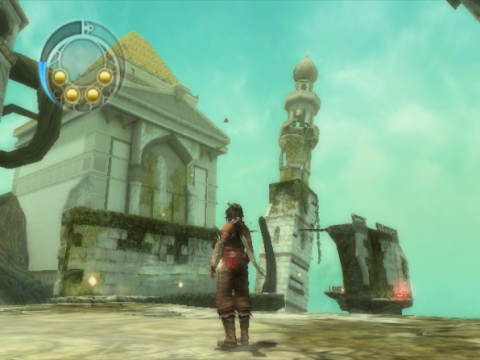 The protagonist looks very similar to the HD game, but his personality is more akin to the treasure hunter without a past from the 2008 game. We learn that he recently purchased a genie named Zahra, who drags him into a new adventure by promising him the lost kingdom of Izdihar over which he’d rule as a Prince. In this iteration of the universe, however, genies are flying lights with faces and annoying voices – it’s Navi from Ocarina of Time all over again. The genie of course is the sidekick to relate to this time, and the writers even try to build up some kind of romance between her and the Prince. Their dialog is often playful, but a few of the jokes are tired. After she makes him kiss a statue for some magical effect, he complains: “Dammit, why didn’t you tell me it would hurt?” Her answer: “You didn’t ask, my prince.” More amusing is the Prince’s verbal wriggling against revealing his name, which of course remains unspoken.

The way the adventure is set up is equally lame: The main plot is kicked off by the Prince pulling out a sword out of a wall just before Zahra thinks of trying to stop him, unleashing the Hamoa, an enormous plant creature that once destroyed the kingdom of Izdihar. Since she seems to know all about the sword and its dangers, it’s hard to grasp why she couldn’t just have told him before. To make things more complicated than just sticking the sword back into the plant, the Prince is attacked by a large abomination (painfully obviously the former king corrupted by the Hamoa) and ends up breaking the magical sword during his defense, setting himself up for a round trip through the palace to get the blade back from the fiend’s gut. 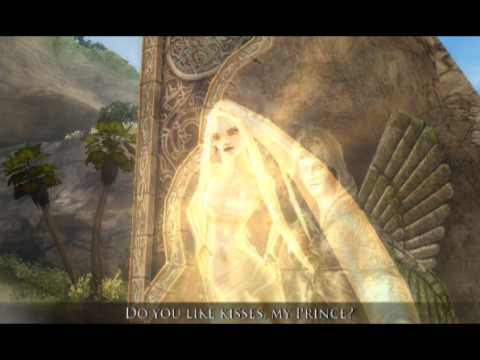 “No need to get personal” comes after this scene.

As so often the story is just a front to have some excuse to get to the action, and you’re dropped right into it, immediately. You start out right in the middle of a crumbling castle and have to carry on before it breaks all down. The platforming is as good as ever, although you have also the option to use the WiiMote to assist with it: To jump onto a higher ledge, for example, you can just draw a line towards it. Even when using the control stick, the line appears to show you which platform is going to be reached by the Prince, and this is pretty important, as the camera work is terrible in this game. You can technically center the camera behind the prince, or move it around by pointing at the edge of the screen while holding a button, but it doesn’t always help. The free camera movement is awkward and moves back once you let go of the button, and there are many scenes where the auto adjust simply doesn’t work. Unfortunately, there are many cheap deaths with the game interpreting input directions differently based on the camera position.

There’s no rewind function this time, although the Prince gets “Life Orbs” from Zahra, which can resurrect him in place in case he dies. One by one, the duo also gets access to Creation Powers, which are applied by pointing at spots on the screen with the WiiMote. They allow the creation of wall hooks the Prince can hold onto or whirlwinds that pull him up to reach greater heights than his mere jumps could. The final creation power is a sphere that serves mostly as a safety net for missed jumps.

For most of the game, the abilities are limited to special plates and thus pointless, aside from a few instances where you have to create new things as the Prince is already in the air. About two thirds in, however, they get extended to be placed anywhere, which opens up a lot of interesting possibilities. The philosophy this time was to bring alternative ways to get around. It’s still fairly obvious where a power has to be applied to follow the main path, but often it’s not necessary to use them, but they can make passages easier, or help the Prince to find hidden areas. 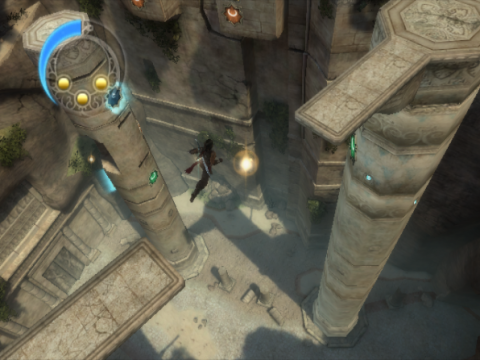 Sometimes the camera switches to give you a more spectacular perspective on a jump.

Combat is entirely centered around using motion controls. You swing around the Wii mode to make the prince slash with his sword, while shaking the nunchuk unit translates to a punch with the steel glove he is wearing on his other arm, which is used to break an enemy’s guard. Like the HD game, most of the Prince’s more advanced combat moves get unlocked over time. There are two major issues with the combat. For one, there are far too many encounters. The majority are fought in boring flat arenas with the exits sealed off, so interesting opportunities to incorporate platforming in the fights are rare. The other problem is that combat also takes really long. Ordinary plant grunts and archers are taken down fairly quickly, but there are also minotaurs with shields you need to break first before you can make any serious damage to them, and big hound-like creatures that can take a whole lot of abuse. Often there are several waves of enemies attacking in immediate succession, drawing things out even more. At least the last group usually has a designated commander, and taking that one out causes all the others to flee.

The creation powers can also be used in combat to hinder enemies, which can make things ever so slightly more interesting. The hook translate to a brief petrification spell, which is useful in preventing those pesky archers from taking shots at the Prince while he deals with the more hands-on opponents. The Hamoa’s Priestessess can only be taken out that way, because otherwise the swiftly slip away from every sword slash. The WiiMote controls make it had to properly aim the powers in the heat of the action, though, and there is a cooldown time to their use which can be quite annoying each time you accidentally froze the wrong enemy.

The game has exactly three large boss monsters, but you need to fight each of them three times – one has a long chase through the palace in between, while the others are merely interrupted by a brief platforming sequence. Only the first boss has badly staged QTE interludes as well, which begs the question why the developers even bothered to build that part in.

As if the pace wasn’t already destroyed enough by all the fighting, the game also has a bunch of rather boring logic puzzles. The setup for some of them makes them look like interesting brain teasers on the surface, but once you’ve figured out how they work, they’re immediately reduced to a lot of boring busywork. Time and again the Prince and his genie also happen upon sealed doors, which are unlocked by pointing at glowing dots in the right order. The lines connecting them disappear after the first input, forcing you to retrace them from memory. Later the plates with these lights also start rotating in various manners, but this mini game never manages to grow into an interesting challenge.

The Forgotten Sands on the Wii is the first game ever in the series to feature a two-player mode. In practice this isn’t as great as it sounds, though: A second player can merely jump in to assist the first one as the genie, making each player’s role less involved than a single player’s experience. 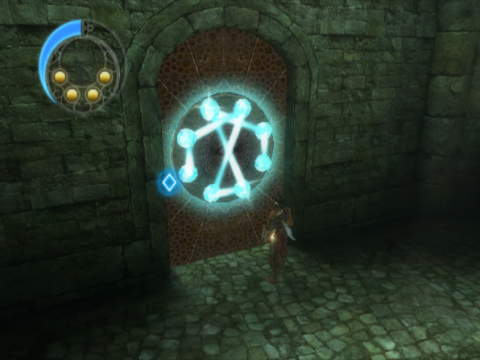 Only one of many doors where you play connect the dots.

The Wii exclusive game may be a middling entry in the Sands of Time series, but at least it’s one of the prettiest. Not content with making the HD version’s uglier sibling, Ubisoft Quebec created lots of stunning architecture for this game, with many interesting wall murals and statues. Izdahar is supposed to be a magical kingdom built by the gods, and there certainly is no lack of grandeur, despite the Wii’s lower capabilities. While desert tones are still dominant, there’s also quite a bit more color variation, partially thanks to the plot introducing plenty of plant life. One particular plot point also allowed the artists to come up with some environments you wouldn’t usually see in a Prince of Persia game, like an underwater palace or a bunch of platforms floating in outer space.

Besides the main quest, the game contains 84 “Heroic Challenges”, which function like Achievements or Trophies, but some of them unlock special stuff. As usual (at least among the more recent games), there are a couple of costumes to unlock. It’s possible to play as the lad from Sands of Time, or Dark Prince from The Two Thrones. There are also art galleries, Short “developer diary” documentary videos and a few hidden maps. Most are rather boring series of yet more fights, but one is played completely on a 2D plane, like the PSP and DS games. This one is free from any combat, but the platforming isn’t too demanding here, making it feel a bit insubstantial. There are also two instances where the main game switches to this mode in between. The classic Prince of Persia is also included again, for the first time since The Sands of Time.