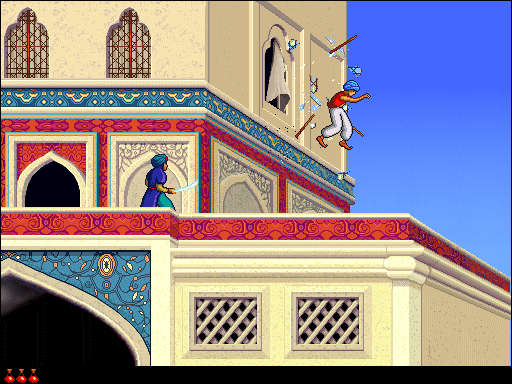 March 11, 1991
Prince 2 doesn’t have to be groundbreaking. It just has to be acceptable, and get done on time. If I aim too high, it could easily suck up another year of my life, and my development as a screenwriter/filmmaker/human being would be the only casualty. I’ve got to remember that, and resist my tendency to expand it into some grandiose, technically ambitious folly. What everybody expects is Prince 1 in new clothes, with a flashy front end and a few new twists. That’s what the job calls for. That’s what I should deliver.

At the end of Prince of Persia, it looked like the Prince and Princess would live happily ever after, but the Vizier pulls some nasty tricks by disguising himself as the hero, and attempts to take command of the country by tossing him in the dungeon. Not willing to sit down and let himself capture like he did last time, the true Prince grabs a sword, jumps out the nearest window and begins his quest to uncover the Jaffar’s scheme, once again. The story is told through still cutscenes and full voiceover, which was pretty impressive for a floppy based game. There are even some impressively animated sections where the Prince rides his magic carpet through the skies or brings a horse statue to life. 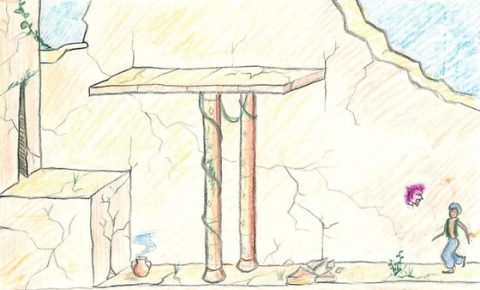 While the first game had been a one-man production for the most part, Prince of Persia 2 was scheduled as the highest budgeted title Brøderbund had ever done by then, with a complete team of programmers and artists assigned to the project. Jordan Mechner still delivered the design bible and was involved in the level design, but his involvement during the later development stages had been rather sporadic:

June 28, 1992
Prince 2 is looking good. It feels cool, being the young game designer who lives in Paris and breezes into town for the week to look in on the project that’s going to keep him rich for a few more years. I like the nuts-and-bolts aspects of working on this project, too. I hate to admit it, but it’s more fun than 16mm student filmmaking. 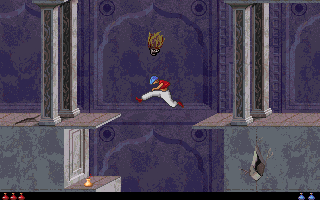 Since the game now had a whole team of artists working on the backgrounds, the Prince finally gets a chance to leave the dungeons in exchange for slightly more exotic locales. The game opens with a chase across the castle rooftops, from where the Prince escapes on a barge and end up on a desert island. Trying to return and get his revenge at the impostor, he treks through caves, ruins and the usual castles, at least giving a bit change of scenery, which was desperately lacking in the original. There’s also the occasional bit of background music, which tends to get a bit repetitive, although the sound effects (especially the death screams and the splat sound effect) are priceless. The graphics are infinitely more detailed, there are more enemies, even a bigger variety of puzzles – it’s everything a sequel should be.

Only the biggest inherent problem with the original game – the counter-intuitive control scheme – is still present. It can be even more frustrating than its predecessor, especially with the new enemies like the annoying snakes and flying, decapitated heads. It makes you wish they’d given it more than a cosmetic overhaul and maybe made it just a little less difficult. The time limit (75 minutes) doesn’t start until about halfway through the game, but that doesn’t make the constant play-die-restart cycle any easier to deal with.

At least the Prince doesn’t get instantly killed anymore if an opponent strikes at him before he manages to draw his sword. That doesn’t mean they are up to a fair fight, though – they come at the Prince in much greater numbers and even attack him from both sides at once, for which he doesn’t have any appropriate countermeasures other than careful prevention. Otherwise the controls work exactly as they do in the first game, with the addition of a crawling movement, which is used to get through low passages or underneath some of the traps. One of the more amusing additions is the opportunity to actually control the Prince’s shadow. The penalty is steep – it comes with the permanent loss of a lot of life bottles – but allows to walk around the levels without fear of being killed.

By the time Prince of Persia 2 came out, the IBM PC had been established as the dominating computer platform, so there weren’t nearly as many ports this time. The Macintosh version can run at a higher resolution, making it a look a lot more detailed, but otherwise they’re the same. In Japan the sequel at least made it onto the PC-98 and FM Towns thanks to the publisher Infoprog. They are pixel-perfect equals of the IBM original, but feature CD audio and even Japanese voiced narration for the intro. 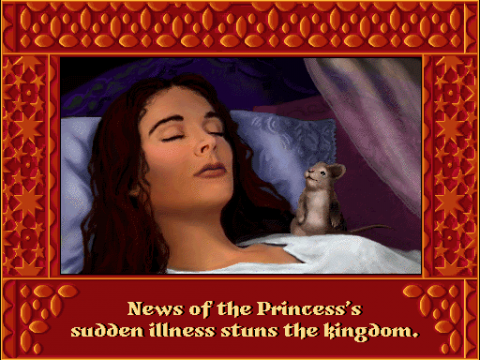 Oddly enough, the game was published only on one console. The SNES version by Titus arrived rather late, in 1996, and it’s a very weird port. The game seems to run slightly faster than its computer counterparts, the time limit begins at the start of the game, and the music is just all kinds of messed up. Most of the coolest sound effects are entirely gone too, but at least the gore remains intact this time. Unsurprisingly, there is no voice over in the cutscenes, and some segments like the ride on the winged horse are told through still images rather than the animated scenes from the original. Almost all of the graphics have been redrawn, with mixed results. The cave sections look much nicer, but the later castle stages are changed from the awesome blood red to a duller brick color. The worst cut-back is the removal of the entire final level – on PCs one of the coolest parts of the game, where Jaffar whizzes the Prince to some messed up alternate dimension full of chess pieces, mirrors and giant spider corpses.

A Genesis version had also been in the works, but it was canned for unknown reasons. Eventually a prototype ROM was leaked, which looks closer to the original than the SNES port and has the content that was cut from the released console version intact. The controls don’t feel quite as polished as they should, though, and the music is absolutely hideous.

In contrast to the first game, which was included in its Macintosh glory, the version of The Shadow & the Flame that can be unlocked exclusively in the Xbox version of The Sands of Time is based on the IBM version, which has been scaled and filtered to once again fill about 50% of the screen. While the unlockable Prince of Persia on the same disc only has passwords to restart at any given level, The Shadow & The Flame now supports save states and can thus be saved and loaded at all times, making the game much easier. 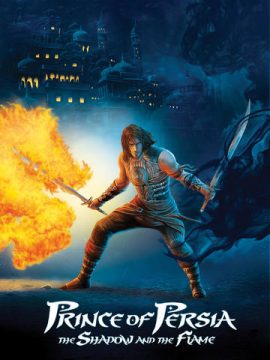 Prince of Persia 2 never got as much love as the first game, but in 2013 Ubisoft Pune – who had previously been tasked with porting Prince of Persia Classic to smartphones – created a new reimagining for Android and iOS devices. In contrast to Prince of Persia Classic, The Shadow and the Flame takes a lot of liberties with the original game. The story with the major plot points and broad locations remains the same, but the levels are entirely redesigned. The game still has 14 chapters, but this time they’re all full stages without any single room interludes like in the original. This also means, however, that some iconic screens like the cave entrance in the desert or the giant dead spider are gone.

The controls offer both options from the predecessor, but the default setting is a gesture system that feels much more naturally on touch screen devices. On the left half of the screen, you simply make a gesture in the direction you want to go, while swiping up or down on the right side makes the Prince jump or crouch. This has its own issues with the distinction between upward and forward jumps, but otherwise it’s very intuitive.

The combat system has been redesigned from scratch, but unfortunately it’s much too easy. You can either just hack at enemies until they signal a block, which always leads to a counter, or wait until an attack symbol very slowly appears above them before they strike and hit the shield symbol, which leaves them open for a combo, which is just more hacking ended by one of three finishers. When swiping forward, the Prince pushes enemies away (and possibly into traps) with the Tiger Thrust, upwards heals him with a Serpent Strike and Falcon Fury is a downwards attack that makes the most damage. The process offers zero challenge and there are much too many enemies to fight. It gets especially annoying in the latter half where the flying skulls attack, which can only be hit by counter combos. 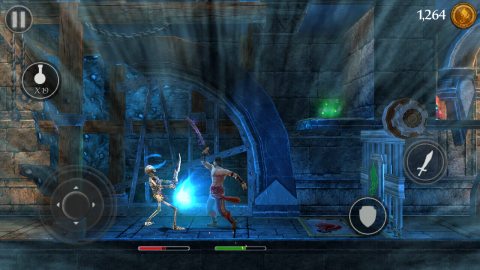 Prince of Persia: The Shadow and the Flame (Android)

The prince gains several stronger swords throughout the adventure, but the most powerful weapons and upgraded combos must be bought with gold coins that can be found in levels or gaine from defeated enemies in small quantities. The game is designed in such a way that you probably won’t get all upgrades from a single playthrough, but the combat is so easy none of the items are really necessary. By the end of the game, it’s not unusual to have about 50 healing flasks left.

Ubisoft Pune also added a half-assed stealth mechanic to the game. If an enemy turns his back at the Prince, you can hold an icon while walking forward to sneak up towards them for an instant kill. However, the process is so slow and keeping two touch points held is so annoying that it’s usually more convenient to just head into an open fight.

It’s a shame about the combat, cause the platforming is still pretty strong with some interesting challenges, especially towards the end where there are several tightly timed sequences. The graphics look OK for a typical smart phone game, but they lack the clarity of the pixel art, and everything on screen just tends to blend together due to the lack of distinct color contrasts. In between stages there are brief 3D cutscenes, but they’re mostly still images. 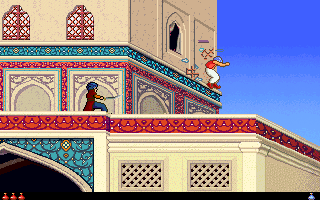 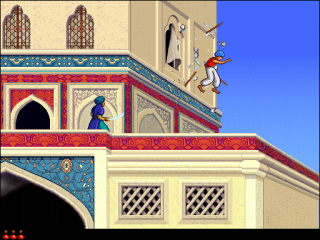 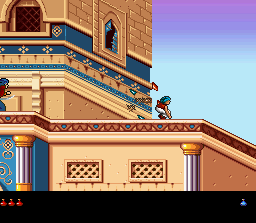 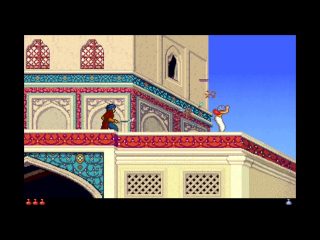 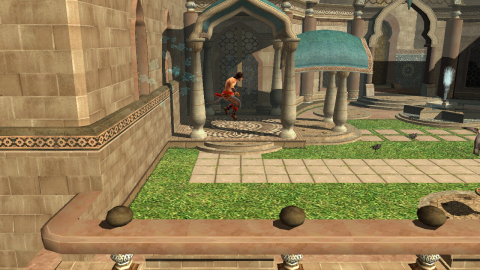