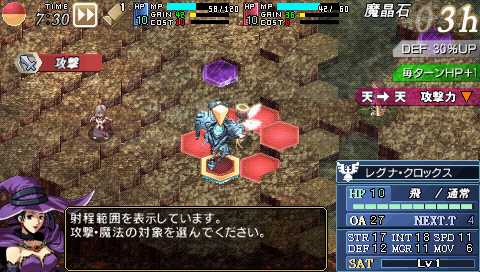 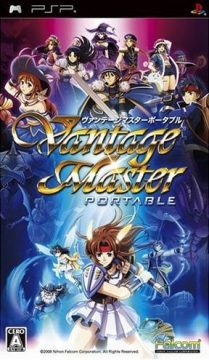 Having found success with their PSP release of Gurumin and Legend of Heroes: Trails in the Sky, Falcom decided to bring Vantage Master to Sony’s portable system. This is no mere port though – it’s actually more of a ground-up remake. All of the graphics have been redrawn to put them at least on the level of VM Japan, and are actually a bit better overall. The playing field is technically 3D, allowing you to zoom in and out or tilt it, although you can’t rotate. The interface has been revamped once again to suit the small screen and control pad. The entire soundtrack has been remixed by Yukihiro Jindo, one of the composers of the Trails in the Sky trilogy, although it’s still not quite to the level of magnificence as VM Japan. (The first print run of the game included a two CDs with both the new music, and the original music from Vantage Master.)

The game classes and rules are all from Vantage Master, although all of the characters have been redesigned, and each have full portraits a la VM Japan. The cameo characters have also been replaced with cast members from Trails in the Sky. The wireless multiplayer of the PSP makes human competition much easier than trying to set up a network game on a PC. Overall, it’s an excellent remake – it’s actually a bit surprising that it was never translated and released in North America, because portable strategy games like Final Fantasy Tactics and Disgaea tend to flourish on the PSP, not to mention the countless other similar titles on the DS. This version was later ported to the Windows platform in Taiwan, under the name Sora no Kiseki X Vantage Master 4.