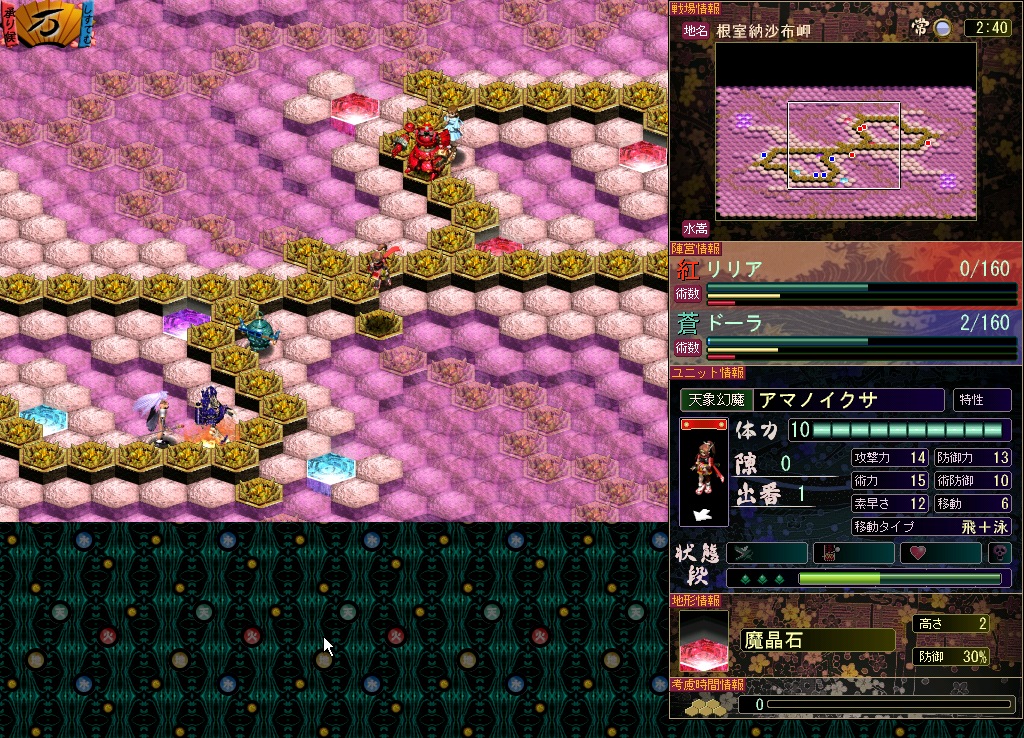 VM Japan, subtitled “Vantage Master – Mystic Far East”, is the first (and currently only) true sequel to Vantage Master. The setting has been changed to feudal Japan, with a brand new set of characters, new maps, and several new Natiels, but the core mechanics are more or less the same. The major difference is that the masters are a bit more fleshed out, with full portraits and fighting game-style dialogues before each match. You can also select your character, instead of being assigned one. There are only eight characters in Scenario mode, but there are more to unlock as Expert and Free modes. There are a total of 28 Natiels to select. There are also three selectable difficulty modes, although once again, Easy isn’t exactly easy. 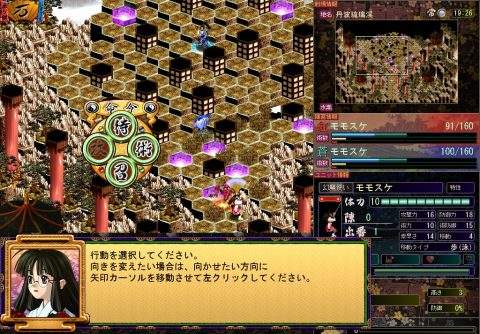 The interface has been drastically reworked to be a bit less obtuse, although it still feels a bit cluttered. The backgrounds graphics have substantially improved thanks to the higher resolution, although the choice of colors is a bit on the garish side. All of the sprites have a bit of an ugly CG rendered look, with choppy, slow animation, but it’s still a step up from the original. The real treat, though, is the fantastically marvellous musical score. A fusion of traditional Japanese instruments like flutes and shamisens, and modern electronica, complete with dance beats and synthesized choirs, it’s not exactly the high powered rock that Falcom is usually known for, but it still stands as one of their absolute best soundtracks. There are also two “matsui” (festival) mini-games – one is similar to the board game Othello, using colored haniwa statues, and the other is a ninja shooting gallery with super deformed versions of the characters.

The initial release of VM Japan included a two CD soundtrack (which was later released separately) as well as an arrange music CD for another Falcom game: Legend of Heroes: Moonlight Witch. A few months after its initial release, Falcom also published a Power-Up Kit (abbreviated as the “PUK edition”), which is pretty much like Vantage Master V2. It includes a whole new set of maps, new characters (including two hidden ones), a Tournament mode, and also unlocks most of the additional modesand characters from the beginning. Amongst the new characters are several faces from other Falcom series, including Dark Fact and Lilia from Ys, Dora (again) from Brandish, and Purea from Legend of Xanadu. You can usually find both bundled together in the same package, although these rereleases are missing the bonus music CD. 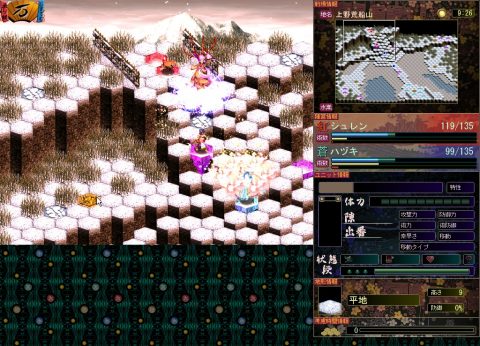 The PlayStation 2 port of VM Japan, published by Asmik Ace, includes a new intro movie along with a remixed version of the theme song, voices for the characters during certain scenes, a revamped interface so the playing field takes up the full screen, and other graphical changes. There’s also a new Story mode where you guide your character across the countryside and battle against any opponent you meet. This is all nice on paper, but in reality, the whole port is a massive disaster. Every time you move the cursor – which is, you know, pretty often in a strategy game – the whole screen pixellates nastily, like the game has problems deinterlacing the image. It’s terribly distracting, and it’s completely amazing that the game ever made it remotely past quality assurance. Additionally, the animation is pretty choppy – which, to be fair, the PC version suffered from too, but it looks embarrassing when placed next to its console contemporaries, even low-res titles like Disgaea. It does not contain any of the content from the Power-Up Kit. 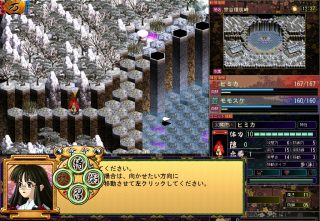 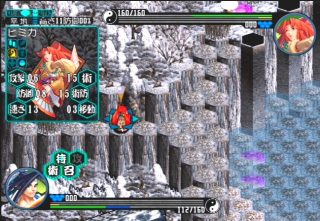