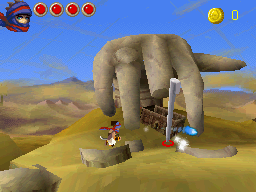 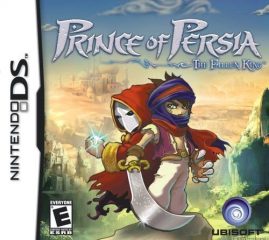 2008 was not the year of the Prince. While Prince of Persia (2008) was the weakest since Prince of Persia 3D, the Nintendo DS was given the dubious honor to host the handheld counterpart. Produced by Ubisoft Casablanca in Morocco, Prince of Persia: The Fallen King ties in directly with the game in dire need of a subtitle, but drops the hero with the red and blue scarf in a super-deformed cartoon world. The plot is picked up where the former game left off, conveniently keeping any ties to a minimum. The Prince is separated from Elika and travels alone to The City of New Dawn in order to find remnants of the power of Ormazd, god of light, to fight Ahriman’s corruption. Here he frees and befriends the half-tainted wizard Zal, who then becomes his sidekick for this adventure. There’s the usual fair share of (text only) banter between the two, but the dialogue between the two is so bad, it’s hard to tell whether it was written for a five-year-old or by a five-year-old. 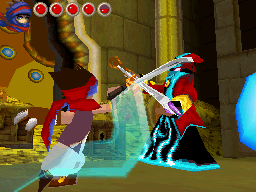 While it uses 3D graphics, the DS adventure takes place on a (gameplay-wise) perfectly flat 2D plane. The game is divided into about 50 medium-length stages, which are connected by Super Mario Bros. 3 style world maps. The Prince is entirely controlled with the Stylus. The Prince just walks whatever the stylus points at, tapping causes him to jump from ledges, double-tapping is for combat rolls. When trying to slide down a wall (once again painfully slow) or jumping hastily through traps the controls can be a bit finicky, in a particularly annoying way. Whenever they aren’t, the game feels even more automated than its predecessor. In fact the platforming is so damn boring, it’s entirely possible – and recommendable – to read a comic book, listen to a podcast, surf the web or do whatever else doesn’t require your undivided attention.

Combat isn’t much better, either. You simply tap enemies to attack. Stroking results in a painfully slow charged attack that’s required to destroy some obstacles, but is useless in battle and in fact harmful when initiated by accidental strokes, which can happen quite easily. It is also possible to block by pointing at the Prince himself, but that’s hardly ever necessary – until the game starts spamming monsters that can only be hurt after blocking their attack, which makes for a tiresome, staged back-and-forth. It’s not so bad when you can just casually murder single enemies in passing. The portions where constantly spawning enemies use force fields to hold the Prince inside an artificial arena are when it gets annoying fast.

Buttons come only into play when commanding Zal to use his magic, whereby any button is as good as all the others. In the beginning, Zal can only activate switches and stun enemies with his energy projectiles, but in the later course of the game, he gets overwhelmed by the taint several times and has to be saved by the Prince. After these episodes and after beating bosses, he learns new powers, like the ability to manipulate tainted orbs that serve as strong magnets for stone platforms and enemies alike, or a magic hookshot. Although the setups to use them always remain very simple, Zal’s powers are easily the most interesting part of the game; The fact that you have to replay stages that were boring the first time to get him back each time much less so. 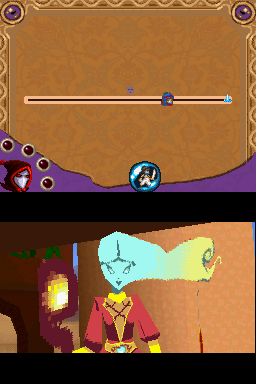 Nowadays action games rarely seem to get away without any form of “RPG elements” upgrading system. Here it’s kept quite simple: Gold coins are dispersed all around the stages, and can be used to open certain doors, behind which lie locked-away powerups. Chances are you don’t have enough money when encountering such a door for the first time, requiring some backtracking through the growingly tedious stages. The best method is to just skip the doors where you don’t have enough money and instead save up your resources for the next one, as the rewards of extra life points and force shields are hardly worth the hassle of going through the same stage twice. The game’s condescending insistence on showing the effect of every single switch in a cutscene, no matter how obvious, even with the opened door right in front of your eyes, is further prove that the main intent and purpose of The Fallen King is no doubt to waste your time without giving you anything in reward.

As is to be expected from a fully 3D game on the DS, the polygon models look very coarse, especially in close-ups during cutscenes. The stages occasionally show some nice details that distract from the dull overall layout. While it looks OK, there’s an in-universe issue with the graphics: The land is supposed to be corrupted by Ahriman, yet it doesn’t look like that at all. The sceneries have their bright (though often monotonous) colors perfectly intact.

While not as annoying as its console companion piece, The Fallen King lacks both the highs and the lows. It’s slow-paced, laughably easy and badly written. The Prince of Persia series continued to deteriorate under Ahriman’s taint at a worrying rate.