The strategy RPG genre has been gaining steam slowly in America. While most Westerners were introduced to it through Sega’s Shining Force (in the 16-bit era) or Final Fantasy Tactics (in the 32-bit era), it’s been a mainstay in Japanese video gaming since Nintendo’s Fire Emblem was introduced for the Famicom in the late 80s. One of the most popular out of all of these was Masaya’s Langrisser series. While the first game was brought out in America way back in the Genesis era (retitled Warsong), the rest of the games never left Japan, mostly due to the low-tech quality of the graphics and general unpopularity RPGs at the time. While the series essentially died off with the Saturn (not technically – more on that later), Langrisser has remained one of the greatest strategy games in video gaming.

What sets Langrisser apart from others of its kind is its tremendous scale. Most similar games have you controlling between five and ten single units. By comparison, in Langrisser it’s not uncommon to control over thirty units at one time, fighting against scores of enemies on a single map. The main characters are extremely powerful units dubbed “generals”. Each general commands a Battalion of generic soldiers, and the two share an important symbiotic relationship with each other. Soldiers are relatively weak, but are available in great numbers and relatively dispensable. Keeping your soldiers close not only keeps the general safe, but awards them with a stat bonus, allowing for far more efficient combat. It sounds like it’s a pain to keep track of all of these units, but you don’t have to move them all individually – if you leave them be, they’ll automatically set up a defensive formation around their leader. All generals have healing abilities for both themselves and their troops, which is yet another advantage of keeping them close. Killing enemies yields not only experience points (which are applied to the troop as a whole, rather than individual characters), but also yields cash to recruit additional soldiers or buy equipment for your generals. This is another important part of the strategy – if you kill a general, all of their troops will die automatically. But eliminating them one by one and saving the leader for last, while more dangerous, will lead to greater rewards. After gaining enough levels, you have a choice to promote a general to higher classes, so you have some role in their character development.

If managing such a huge army weren’t enough, most scenarios have you fighting alongside several computer guided NPC characters. Certain installments let you give vague orders to your compatriots, but they tend to do dumb things anyway. 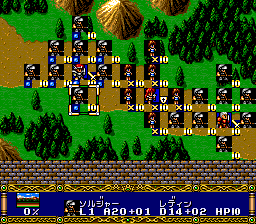 Much like other strategy games, there are three primary unit types that have various advantages and disadvantages over each other like rock, paper, scissors. Terrain bonuses also play a heavy part in strategy, as hiding in forests or mountains give you incredibly advantages over fighting out in the open. When you engage in combat, the game switches to a zoomed in side view depicting the battle (much like Military Madness or its spiritual successor, Advance Wars.) Regular soldiers charge at each other, clashing until they fall. Generals attack with magic spells that tear through regular warriors. While they’re fun at first, most of the games let you turn these sequences off, as they make the long battles seem even more drawn out.

All of the games revolve around the holy sword Langrisser and its counterpart, the Alhazard. Each Langrisser game is also populated with a huge cast of characters, both good and evil. There’s quite a bit of dialogue in battle, which makes it all the more frustrating that it was never translated from Japanese.

These characters are brought to life by the beautiful illustrations by artist Satoshi Urushihara, notable for anime such as Legend of Lemear and Plastic Little, and infamous for hentai like Ragnarok City and Front Innocent. Urushihara has a specialty for designing attractive, scantily glad girls with wistful doe eyes and impossibly pert breasts, but he doesn’t stray away from creating stylish male characters with overflowing spikes of vibrantly colored hair, suited up in stylishly bulked-up armor. They’re some some of the most detailed character portraits ever seen for any video game, and certainly far better than anything seen in the 16-bit era.

Langrisser‘s other main star is its primary composer, Noriyuki Iwadare. Famous for composing classics such as Lunar and Grandia for Game Arts, Iwadare’s music is full of heavy synth rock, with far more energetic flavor than the brooding orchestrations from the likes of Final Fantasy Tactics.

The true Langrisser series includes five games, originating on the Genesis/Mega Drive, and ending on the Saturn/Playstation. The Dreamcast installment is largely considered a bastardization and goes unacknowledged by most fans.

Langrisser is one of the finest strategy RPG series out there. It has the depth that Shining Force lacks, but doesn’t require the obsessive perfection that Fire Emblem demands. And unlike Final Fantasy Tactics or Nippon Ichi strategy games, the focus is more on strategic thinking than building up levels or skills. The only real problem with it – other than the fact that only the first one was ever translated into English – is that it’s too epic for its own good. You play certain levels, and it takes several minutes of sitting and waiting – waiting for the computer to think and move, or waiting for your characters to move across the map. Although efforts were made to trim the number of units in battle, it still feels like many battles simply comprise of doing nothing. But for those who are patient, Langrisser will prove to be a classic.

The original Langrisser wastes no time getting started – in the first battle, you’re thrust into the shoes of prince Redin (Garrett in the English version.) Under attack from a warring kingdom, you must escape with your life, band together with your old friends and allies, and fight through over twenty scenarios to take back the crumbling kingdom of Baltia. 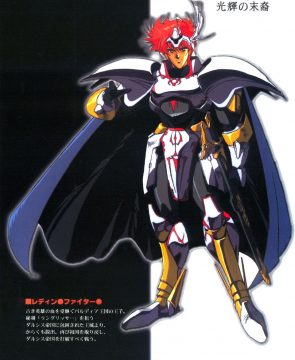 The hero of the game, a prince thrust out of his own castle. 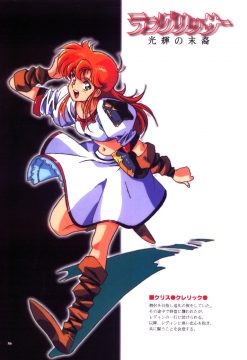 A young cleric who grows quite fond of Redin. 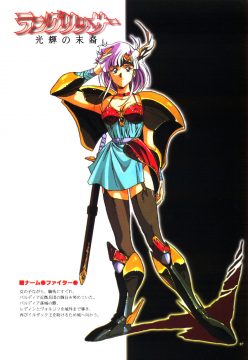 One of the major generals of your fallen kingdom, she helps Redin escape at the beginning of the game. 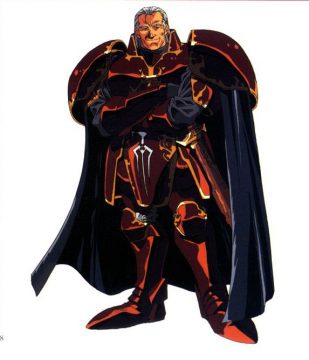 Volkov is your bodyguard for the first several missions. He’s overpowered, but don’t let him steal the experience from Redin, because he’s not around for too long. 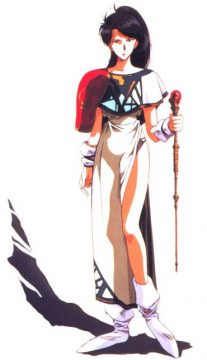 A powerful warlock that fights for your kingdom. She appears in several Langrisser games and does not appear to age. 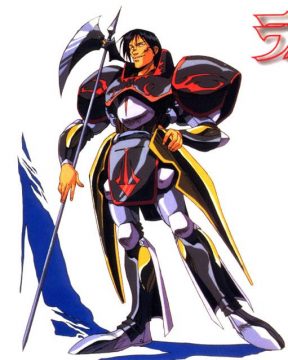 A powerful ex-pirate that tossed away his pillaging ways allied with Redin’s faction. 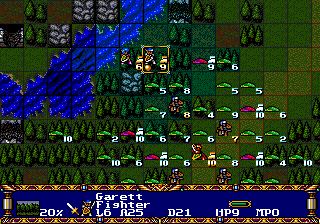 Since this is the first in the series, Langrisser is somewhat unrefined and rather clunky. In the 16-bit versions (Genesis and PC Engine) each character can control up to eight soldiers, which litters the battlefield quickly. The Genesis version also lacks the ability to turn off the fight scenes, making every battle an extremely drawn out affair. Thankfully, you can save your game at any time.

While Treco was awesome enough to translate the Genesis version and bring to America, it didn’t survive some alterations. Nearly all of the names have changed, and most of the character artwork was changed slightly. While everyone still has the wildly varied hair colors typical of anime, their faces were redrawn to make them seem more Western. I’d wager that Garrett’s looks a tiny bit better, but the females ended up getting the short end of the ugly stick.

Even by 16-bit standards, the graphics are pretty unimpressive, especially when stacked up to the likes of Shining Force. The Genesis version fares the worse, obviously, although it does have an option to zoom out the battlefield to get a better view without the need to scroll. The 32-bit versions are also lacking the graphics department, although the redrawn character portraits are quite nice. The visuals on the Saturn version do look a little bit better, although the difference isn’t really noticeable unless you put them side by side. The PC Engine version has some decent cutscenes, while the 32-bit CD versions some full motion video, although not very much.

The Genesis and PC Engine versions are pretty much the same game. The 32-bit versions feature the streamlined gameplay from Der Langrisser, the major difference being that the number of units each general can command is lower, making for much faster battles.

The soundtracks in the Genesis and PC Engine versions are excellent, although the latter benefits from enhanced CD audio arrangements that sound vaguely reminiscent to Ryo Yonemitsu’s work on the Ys series. The Playstation and Saturn soundtrack is completely different from the 16-bit versions, and while it’s also very good, the Playstation synth sounds noticeably weaker than the Saturn’s. 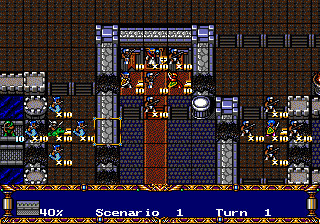 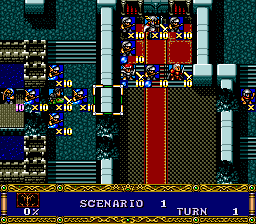 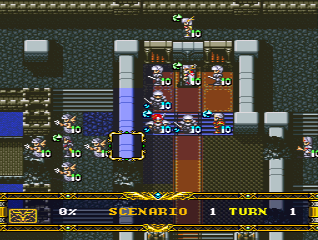 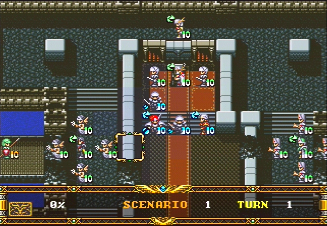