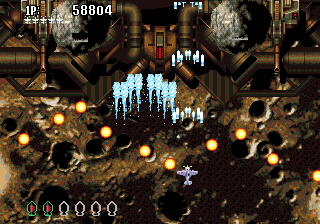 This sequel appears to have some type of time-travel storyline, as the usual fighter jets are replaced with World War II fighters. Two-player character selection is once again restricted to pre-defined pairs, but there are ten planes available (in one-player mode, the player can choose any of the ten, rather than be limited to half of them as in the first game).

The graphical presentation is almost identical to Aero Fighters 2, though the sound is somehow not as good. The boss theme, is memorable, and not in a good way. It is a very short song and it features vocals, mostly of a man screaming and gargling continuously. While funny at first, it can get annoying after a while, especially because you will be hearing that song loop over and over again. Levels tend to be short and bosses can take a while to defeat, usually longer than it takes to finish the actual level, so that screaming and gargling is going to be playing almost all the time. 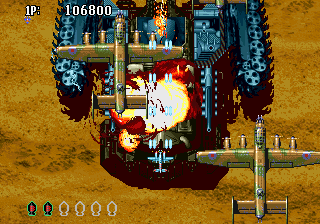 On the positive side, Aero Fighters 3 adds charge shots to a few of the playable characters. Additionally, many of the returning characters were redesigned with a fresh look that fits well alongside the other new faces in Aero Fighters 3.

Sporting a sleek new hot-rod red robot suit, Keaton returns to action in the classic American F4F Corsair attack plane. Mecha Keaton’s shot shoots strong and fast missiles that are, unfortunately, hard to aim sometimes. He has possibly the coolest bomb in the series, the ability to grow huge into giant Mecha Keaton and attack with his drill hand, metal fist, and laser eyes. He fights alongside the Blazers in two-player mode.

The Blazers, consisting of Glen, Gil, and Glinda, are a team that flies a P-61 Black Widow together. Glen and Gil are from the Video System’s obscure beat ’em-up Karate Blazers. Glinda owns the plane. Their plane is equipped with a wide shot and a homing cannon, which is very useful given its bad speed. The plane’s bomb shoots four huge missiles that spread out and detonate. They team up with Mecha Keaton in two player mode.

Hien is back with shurikens as his main shot and boomerangs as his sub-shot. His bomb has his plane transforming into an enormous phoenix and shooting fireballs everywhere. Hien also regularly talks to his shogun between missions. He teams up with Mao Mao in two-player mode.

Mao Mao was shooting a movie, until the events of Aero Fighters 3 got in the way. She has powerful homing lasers and still has her EMP bomb, so while she looks different, she plays the same. Mao Mao teams up with Hien in two-player mode.

Twin sisters from Russia, Chaika (in blue) and Pooshika (in red) fly their IL-2 Stormovik together to earn money for medicine for their father, a story very similar to the plot of Psikyo’s Gunbird 2. Their normal shot is easily one of the weirdest, firing lighthouses (?) straightforward at a very fast rate. Their bomb summons giant Russian dolls to crush everything in their path, complete with its own theme music. They team up with Whity in two player mode.

Whity still has his water blasts, water shots and water bomb. All of these attacks move in a straight line and move at a slow speed, making them a little hard to aim, but still powerful. He is one of the characters with a charge shot, firing a strong blast of water. He teams up with Chaika and Pooshika in two-player mode.

Malcolm, originally debuting in the obscure fighting game Tao Taido, is not only a great pilot, but an expert break-dancer. One of his moves, the Malcolm Flash, is his bomb and he fires traditional homing rockets for his normal shot. Malcolm is also one of the characters with charge shots. Upon charging, a crosshair appears, after aiming and releasing the ‘fire’ button, Malcolm shoots very large and destructive missiles where the crosshair is. Malcolm teams up with Lord River-n-White and Kowful in two-player mode.

Lord River-n-White and Kowful do not get along very well and will fight sometimes during the story. Their plane, the Ju87G Stuka, fires huge missiles as a sub-shot and fires a huge bomb that does not really do anything other than make a huge explosion. In two-player mode they team up with Malcolm.

Alex is an energetic boy that flies with his cat, Pictus. They shoot slow moving, zigzag missiles as a sub-shot and summon other planes to help them for their bomb attack. They team up with Ellen and Cindy in two-player mode.

The events of Aero Fighters 3 end up interfering with Ellen’s wedding, as she is seen in a wedding dress during the game. Much like Alex, Ellen and Cindy shoot slow moving zigzag grenades as their sub-shot. Their bomb is more similar to the Blazers’, as it has them doing a loop and shooting blasts of water. They team up with Alex and Pictus in two-player mode.

Kotomi is a hidden character hailing from Video System’s earlier game, Rabio Lepus (also known as Rabbit Punch). Her main weapon never gets very powerful, but her bomb attack makes her invincible for several seconds, allowing you to just fly through things to destroy them. Unlocking this character requires PRECISE timing on the character select screen.

The Man is another hidden character, this one from Video System’s car game, Turbo Force. He is a mysterious person who pilots a really cool flying car called Diabloon, with powerful guns mounted to its hood. The Man is revealed to be Captain Waffle from another Video System game, Spinal Breakers. Diabloon is still a big red car, but is fitted with jet engines so it can fly. Unsurprisingly, it plays a lot like how it does in Turbo Force. Diabloon’s main weapon is a spread-fire plasma gun, and its bomb attack rains meteors all over the screen or puts up an invincibility shield. Which bomb comes up is decided at random. 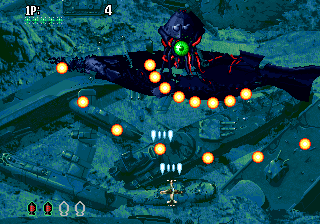 The way branching paths are handled has changed too. At the end of each level, a large enemy plane tries to escape through a portal. Which path you take depends on which wing you blow off of it first. One game lasts eight levels, but they all come from a large pool of over fifteen. You end up getting harder levels and tougher bosses if you’re doing well, likewise, if you end up with a bad score and use more than a few credits, the game pulls its punches and sends you to easy levels. This simple, but very well implemented rank system adds a lot to the already high replay value.

Lastly, Aero Fighters 3 makes an unexpected jab at Taito’s Darius series, parodying its pre-boss warning message and making you fight the stupidest battle in the series, a giant mahjong tile dressed as a school girl that skips and prances when attacking and cries when it gets hit. If she kills you, you get a special game over screen where she prances and sings as the world burns. It is by far the funniest moment in the series and perfectly illustrates the wackiness that lies beneath Aero Fighters‘ seemingly generic exterior.

This game supports the Neo-Geo’s region detection system. If played on a US-region system, the title screen reads Aero Fighters 3. If it’s anything else, it instead goes by its Japanese title, Sonic Wings 3.