Something many of these more popular early SNK games have in common is that they all borrow heavily from the pop culture of their times. Last Resort is a transitional game between the cynical cash-ins SNK had published in 1990 like Ninja Combat and Ghost Pilots, and the uniquely SNK aesthetic they would perfect in their later games.

It doesn’t look promising at first. Last Resort is a scrolling shooter, a genre that even in 1990 had already been flooded with wannabes and ripoffs. One could also be forgiven for thinking they were playing a game based in the 1988 animated adaptation of Akira, as SNK’s artists were more than happy to copy some background art from it that it may as well have been traced. Fortunately, while it seems unoriginal at a glance, the game’s difficulty is high but fair, and it offers a uniquely dour atmosphere. Even its story, while generic and not even present in the game outside of its two endings (Last Resort must be completed twice in a row to really beat it), is sure to point out the massive bloodshed and destruction caused by the players’ battles compared to the more generically heroic conclusions of shooters like Life Force or Contra. 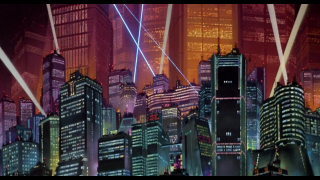 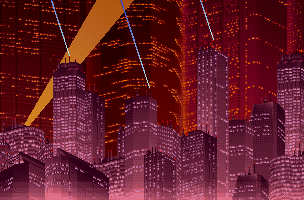 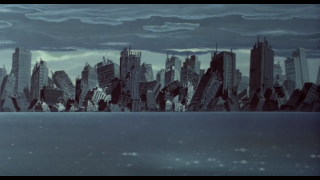 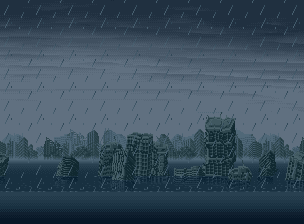 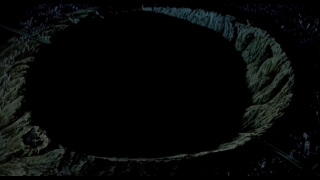 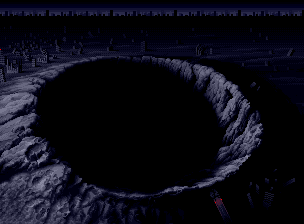 Not content to just rip off Akira‘s skyline, however, Last Resort also offers us a pixelated take on the cratered ruins featured early in the manga (and as the title card of its animated adaptation) duplicated in extreme detail. While Last Resort‘s story is different, it impressively uses just these two shots from Akira as a jumping off point to keep a continual visual progression through the game’s world. The game’s first boss (a wannabe giant sized Terminator) emerges from the demolished city at the end of the first level. Upon defeating him, players fly their ships into the background’s ruins, which make up the game’s second level. Level’s three and four have them passing from the watery ruins to a mine under the city, surfacing to enter a massive factory. The final level takes place entirely in space, where a massive battleship (similar to the ones encountered in the R-Type series) must be confronted before the game’s malevolent AI can finally be sought out and destroyed. It’s a brutal conclusion, with a near constant onslaught of enemies. Players must also navigate a very crowded asteroid field in between that battleship and the game’s final boss. There’s an impressively large number of rocks hurtling towards the player here, and as an extra way of making it even more difficult, items that increase the player’s ship’s speed appear here constantly. 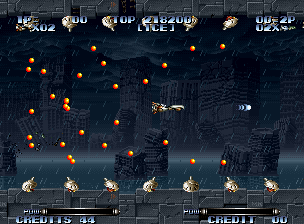 That battleship isn’t the only homage to R-Type in the game.  It’s been something of an open secret for years that SNK drafted some of Irem’s developers to work on this game. The art style in general being very reminiscent of the detailed graphics and mechanical foes found in R-Type II. The players’ ships, the TZ-024 and the YS-024 are also clearly influenced by other Irem games. The former looks a bit like the ship in Irem’s Armored Police Unit Gallop while the latter looks like the ship from R-Type itself. Both are mercifully much smaller targets than the ships in either of those games. It was a nice touch in 1992 to have the two ships be completely different sprites instead of just different colors. Unfortunately it’s a detail that was forgotten by SNK itself while making the game, even Last Resort‘s official packaging features two ships drawn identically to each other. 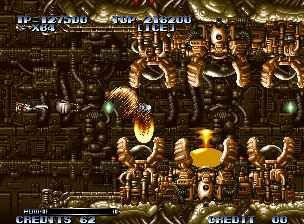 So much of Last Resort’s atmosphere and graphics are derivative of its contemporary pop culture, that it can be easy to dismiss the game completely. Players that do so will be missing out, however, as SNK has also packed in just enough intense action, new ideas, and catchy music to make it stand out. The biggest change to the combat of the genre is how the that pod-like drone functions. Instead of being stuck in front of or behind the ship, it follows the player’s movements and makes a great makeshift shield against enemy fire. By pressing the B button, it will be locked in place and can be used offensively to direct its fire or even to ram into enemies with.

This extra versatility makes Last Resort‘s drone unique compared to the device that influenced it from R-Type. Its last trick is that it can be launched across the screen at and through most enemies, dealing massive damage to them. This is accomplished by just holding down the A button for a moment, which will charge up a gauge at the bottom of the screen that will increase the drone’s damage as it shoots out through anything in its way and then damages enemies even more as it returns.    Depending on how it’s positioned around the ship, players can also control whether it will travel along any walls it hits or rebound off of them. The entire game is built around making good use of this (the game actually cannot be completed without precise use of the drone unless one has a very large amount of quarters), giving it a strategic feel compared to most other shoot–em-ups, and making it as interesting to play as the R-Type games that influenced it. Irem itself even experimented a bit with Last Resort’s drone abilities in R-Type Leo. 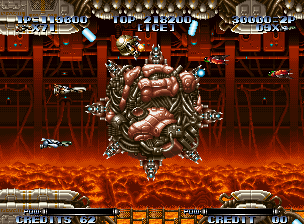 Last Resort‘s deliberate pacing also helps it stand out from other shoot-em-ups of the early 90s. Enemies and large quantities of projectiles for the time are almost constant throughout the game. While it suffers from some slowdown when too much gunfire is on the screen at once, things generally move fast. The aggressive, but slow industrial soundtrack by SNK regulars Toshio Shimizu and Yasuo Yamate contribute to the game’s dangerous atmosphere almost as much as the constant hail of bullets. The game’s second level is a nice early showcase for the Neo Geo’s capabilities, and also where the game fully changes from looking like a rip off to carving out its own identity from the ruinous final moments of Akira. While the stage’s backdrop is heavily inspired by Akira‘s ending, it goes in the opposite direction, with an open, rainy day gradually switching to a more cramped level in the middle of the night. There’s a nice effect of constant rainfall that SNK would later top in The King of Fighters ’99, and the stage’s slow, short, but complex by early 90s arcade standards music ties all of this together into a suitably depressing package.

The second level’s boss is also a great moment in the game thanks to its theme music. The design of the boss itself is a fairly boring to look at. The actual fight is great though, with the overcast and rainy first half of the stage giving way to a much darker storm along with that oppressive theme that has more in common with some of Chu Ishikawa’s industrial music than it does with anything from other shoot-em-ups. It’s also even slower than the stage’s already dirge-like tune, mirroring the oppressive ferocity of the boss’ various attacks. The soundtrack in general follows this trend, and while it’s not always as depressing as what we encounter in the second stage, it makes complex use of mechanical percussion samples that set it apart from almost any other game soundtrack out there in 1992. 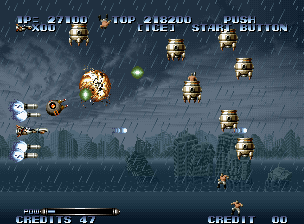 The music becomes a bit more hopeful in the third and fourth levels, as players enter deeper within parts of the planet now completely controlled by machines. There’s an implied extra level of cruelty present throughout. The game’s manual is specific about how the enemies are purely robotic. A computer intelligence that has systematically mobilized massive amounts of military hardware against humanity, yet many of the craft the players destroy actually still have human pilots trapped in them. Each time one is defeated a human is seen helplessly tumbling away from it. In a game where all of the enemies are strictly mechanical and metallic in nature, these brief glimpses of human beings stuck in a front row seat to humanity’s destruction are a nice touch. After leaving the opening of the first level’s urban sprawl, the only signs of biological life in the entire game besides these hapless victims and the robots themselves is a large worm encountered in the beginning of stage two (an homage to a similar one found in R-Type II.

Alas, Last Resort’s biggest issue is also R-Type’s – it’s an incredibly difficult game. Dying sends you back to a checkpoint far earlier in the stage, and pretty much the only way to master the levels is to memorize them. When playing with two players, destroyed ships will respawn instantly, but without the drone power-ups, which can make boss fights extremely tedious. 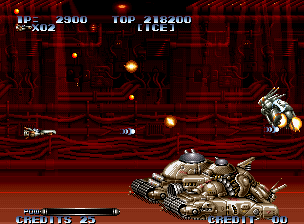 Fortunately, Last Resort‘s excellent atmosphere and tight, challenging action make it easy to overlook the more brazen inspiration it took from other sources and its unbalanced cooperative play. While it stayed on the Neo Geo systems, it eventually made an appearance on the Wii, PS2 and PSP via the compilation SNK Arcade Classics Volume 1 in 2008. It’s a straight emulation but the PS2 and PSP versions are plagued with extra slowdown. The Wii version on the Virtual Console is a nicer looking, more accurate emulation. 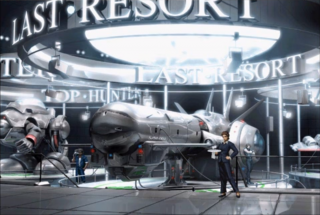 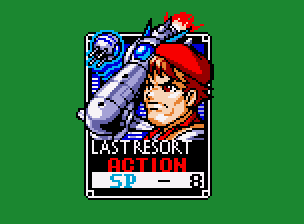