This entry in the series, which appears to be a remake of Aero Fighters 2, jumped ship from the Neo-Geo hardware and was instead developed on the Sony ZN-1, which is essentially a Sony PlayStation tucked into an arcade cabinet. This entry does not appear to have had a stateside release; Aero Fighters Special only seems to have been distributed in Taiwan, and the Playstation port, Sonic Wings Special, only reached Europe. The Taiwanese version is completely in English.

Aero Fighters Special feels a lot more contemporary than the previous entries. There are more bullets here than any other entry in the series and some elements of danmaku, though not enough to keep it from feeling old school. Hit box sizes are also reduced, adding to the more modern feel, though grazing does not offer any sort of advantage. Sonic Wings Specialis also the biggest game in the series, with 17 levels. Only nine are played per round, and if a secret fighter is chosen, you get an alternate version of that level. If you count the alternate versions of each level, you get 34 total possible levels to play. All of these levels are remixes of levels from the first three games, Aero Fighters 1, 2, and 3. Which one you play is decided based on your score after level 4. 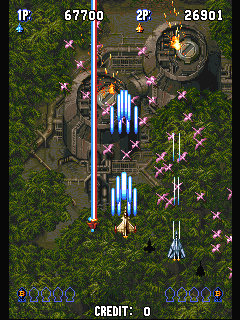 Mecha Keaton, looking somewhat closer to his appearance in Aero Fighters 3, acts almost the same way as in AF2 – except that his new bomber attack has him exit from his plane, grow to massive size, and stomp through the stages like Godzilla for a limited time. If you press ‘fire’ in this state, he will fire two giant particle beams, which destroy nearly everything in their path while recoiling him to the bottom of the screen. When time runs out, he shrinks back to normal size and jumps back into his plane. Keaton is alternately referred to as Robo Keaton, depending on which region of the game you’re playing. His unlockable plane, The F4-U plays just like it does in Aero Fighters 3.

Captain Silver plays pretty similar to how he did before, having a tactical nuke for a bomb and wide grenades as sub-shots. What makes him different is that holding the shoot button changes his weapon to a rapid-fire machine gun. While this is cool, the machine gun stops firing after only a few seconds, leaving you vulnerable. Captain Silver’s unlockable plane is the P-61, the exact same plane Glenda and the Blazers had in Aero Fighters 3. It plays exactly the same too.

Hien plays pretty similar to his previous appearances, shooting shuriken as his sub-shot and has an electric laser bomb. The bomb will sometimes randomly shoot fire instead, which does a little more damage and looks really cool. Holding the shoot button for him is not nearly as interesting as many of the other characters, as it is a charge shot that shoots little propellers that move very slowly. His alternate aircraft, the Gekkou, fires homing shots from wingmen and shoots a circle of fireballs as a bomb.

Mao Mao, like Hien, also plays very similar to her previous appearances. She has homing lasers as sub-shots and still has her bomb that stops time. Her charge shot is much more interesting than Hien’s, which shoots a wide spray of lasers everywhere. Her unlockable plane, the Seiran, plays like it does in Aero Fighters 3.

Volk is a Russian soldier that died in combat, but was brought back to life as a cyborg. He has a much darker look than the other wackier characters. Volk’s Ka-50 Hokum is different from all the other planes, mainly because it is a helicopter. Something unique about it is that Volk’s helicopter veers from one side to the other and stays that way, letting you shoot straight or diagonal. Holding the shoot button locks this weapon in place so that you don’t have too many problems aiming. To make up for the very difficult to use main shot, Volk’s bomb shoots powerful homing missiles. If you take the time to learn how to use Volk and get used to his play style, he is one of the more fun characters in the series. Volk’s unlockable plane, the MiG3, is ridiculous. It fires lightning bolts as its sub-shot, which not only look awesome, but also deals a lot of damage. Its bomb is not nearly as interesting, shooting guided missiles at targets.

Chaika and Pooshika play very different from Aero Fighters 3. Their normal shot is a standard spread fire, while their charge shot launches explosive Russian dolls. Their bomb still involves giant Russian dolls smashing everything in their path, except the bomb sometimes summons only one giant doll. The giant doll shouts things in Russian and uses the words to destroy everything. It is much more powerful than the normal bomb.

Angela returns, looking androgynous as ever, and plays very similar to how he did in Aero Fighters 2. What makes him play different and feel fresh is what happens when you hold the shoot button. His option spins around him, much like the rotating options in Gradius. It adds a surprising amount of depth to his ship, even if it is a minor tweak. The unlockable plane, the Dowoitine D520, also has this fun little satellite that follows him around. Its bomb sends in stage spotlights that somehow hurt enemies.

Ellen and Cincia are back in the F-14 Tomcat, like they were in Aero Fighters 2. They play pretty much the same, with homing rockets and a bomb that causes a barrage of explosions. The big new addition for them is that holding the ‘fire’ button makes the Tomcat’s wings expand or contract. This increases or decreases speed. Being fast or slow can make some parts of the game easier and others harder, so being able to control your speed makes them one of the more interesting playable characters. Their unlockable plane, the Sword Fish, plays identical to its appearance in Aero Fighters 3.

Kowful plays much like how he does in the first Aero Fighters. He shoots missiles in a spread as his sub-shot and does a loop and fires homing missiles as his bomb. Kowful gets a new charge shot too, which fires a really big missile. His alternate aircraft is the same as his regular plane from Aero Fighters 3.

T.B. plays similar to his previous appearances. His sub-shot fires slow moving drone satellites that home in on enemies. They absorb bullets, making bullet dodging much easier for T.B. than for any other character. His bomb drops many small bombs and they all detonate in a small area. What makes T.B. play different is his charge shot, which lays land mines. What makes this strange is that the land mines somehow hit planes. Even though it makes no sense, T.B.’s land mines work great on bosses and not much else. The unlockable plane, the B-239 Buffalo, is new to the Aero Fighters series. It uses floating mines similar to the Star Fighter, but they move much faster. He also has a laser bomb that functions similar to the purple “toothpaste laser” from the Raiden series.

Whity keeps with the water theme he has had through the entire series, shooting a water blast as a charge shot and summoning a really big wave as a bomb. He plays different from any other appearance, though, firing a weapon very similar to the ripple laser from Gradius. Whity’s unlockable plane, the Hs129, shoots air mines as its sub-shot, similar to T.B.’s. It shoots a giant wave of water for its bomb attack, very similar to his normal plane’s bomb.

Lord River-n-White, like Whity, plays nothing like he did before. His shots and bombs are standard, spreading napalm that has a delayed burst. What sets him apart this time is his dodge. If you hold the shoot button, Lord River-n-White will grow huge for a few seconds. During that time, he is invulnerable, but unable to attack. Use of this unique ability is crucial to mastering him and once you learn it, the game becomes a lot easier in general. His new plane, the Boulton Paul Defiant, is strange. Its main gun homes in and automatically targets enemies. It’s surprisingly hard to aim and takes some getting used to before settling in. The bomb is good, though. It has support wingmen that fly in to help and makes you temporarily invulnerable.

Kotomi is a secret character, unlocked by beating the game with the two NATO characters, Angela and Ellen. Once you have completed the game, you can select Kotomi or her partner, The Man, by pressing ‘down’ on a NATO character or ‘up’ on a United States character. She plays a lot like how she does in Aero Fighters 3, with a very powerful main weapon and turning invincible as her bomb. She does not have an unlockable plane.

The Man, like Kotomi, is a secret character, unlocked at the same time as Kotomi. He plays similar to how he did in Aero Fighters 3, with a spread gun and a meteor storm bomb. He does not have an unlockable plane.

In the home versions, you unlock a secret plane whenever you beat the game with a character. Secret planes are all historic, usually from World War II. Also, even though there are teams, once you start unlocking content, you can start mixing and matching teams as you like in two-player.

One of the big additions to Sonic Wings Special is its save feature. Between levels, you can press ‘L’, ‘R’, and ‘Start’ all at the same time to save the game. It’s not often you see a shmup with a save feature, making this pretty unique. There is also a time attack mode, which makes you only fight super powered versions of various bosses. It also supports arcade style monitors, though in order to use this feature, you have to turn your TV or monitor sideways if you don’t have a vertical monitor.

The European ports lack a save feature, meaning that unlockable content and high scores have to be achieved each individual time the game is turned on. The unlockable content consists mostly of planes from previous games and is unlocked by completing the game with that character.

Sonic Wings Special has been released many times, first by Media Quest in 1996, by Hamster in 2002, by Phoenix Games in 2004, and finally a PSN version was released in 2010 by Monkey Paw Games.