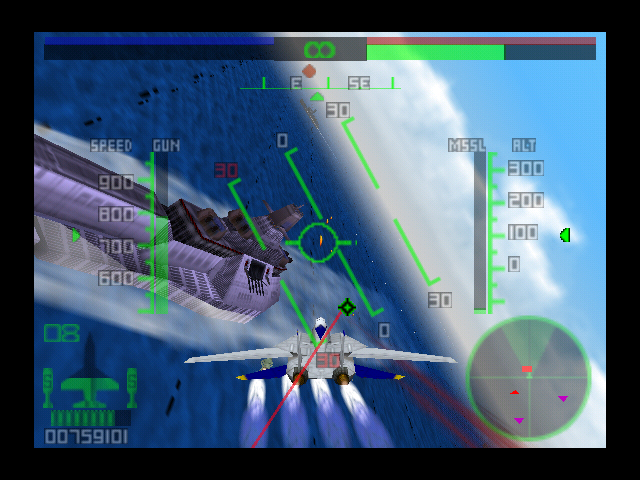 Perhaps sensing that scrolling shooters were becoming less popular with the gaming crowd, Video System contracted the final game in the Aero Fighters series to developer Paradigm Entertainment, the same guys behind Pilotwings. When the game came out, Video System boasted that an ex F-14 pilot was one of the programmers. Aero Fighters Assault is more of an Ace Combat or Starfox-style flight sim game.

The controls are somewhat complicated, but once you get used to them, Aero Fighters Assault becomes much easier to understand. There are separate buttons for shot, homing attack, defensive attack, special attack, thrust, slow, and turning quickly. Learning the controls is fairly easy once you know what each button does, and the ‘Z’ button being the trigger has always been one of the better parts of the N64’s sometimes clunky controller. 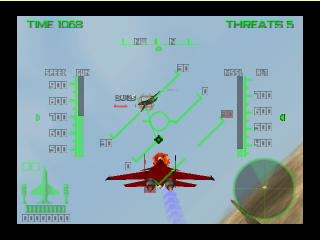 Aero Fighters Assault‘s story involves an organization called Phutta Morgana heating the Antarctic and flooding the world. This is very apparent in the first level, which takes place over the city of Tokyo, completely flooded. In typical Aero Fighters tradition, you fly all around the world, culminating in a battle in space. The backgrounds are not nearly as colorful and detailed as they are in past installments, though this is mostly due to the low polygon-count 3D that looked state of the art in 1997.

Keaton Hawk (no relation to Robo Keaton) flies the F-14, sporting a cocky attitude and surfer accent. His plane is equipped with a 20 millimeter main gun, phoenix missiles as his guided rockets, chaff for his defensive weapon, and tomahawk missiles as his special weapon. Interestingly, Hawk has two portraits, one for the Japanese release and another for the United States release. He looks basically the same in both, though.

Hien’s ninja weapons look even more ridiculous in 3D. His kunai shots do not do very much damage, but fire fast and have good range. The homing stars do great damage and surprisingly explode on contact. In tradition, Hien always has his ninja beam, which is very destructive against bosses.

Volk has got a lot less serious since Sonic Wings Special. He takes joy in quoting Scarface and has a much more relaxed attitude toward shooting down enemy planes. He also ditches the helicopter and now pilots a large red jet that is all about burning everything. His main shot, fireballs, do very good damage. The fire arrows, while not as destructive, are a good homing weapon, and his “little friend” is a bomb that shoots a huge wave of fire everywhere. Unfortunately, his air mines are not very useful, especially because the AI is smart enough to avoid it, and most bosses never move.

Glenda plays very similar to Hawk, having a couple of the same weapons. Her main gun, rockets, and special weapon do a lot more damage, but she moves a lot slower. You can easily blaze past some of the bosses with ridiculous health bars if you have a good aim.

Mao Mao has a weak main gun, but makes up for it with good homing missiles. She also keeps her EMP that freezes enemies. Additionally, Mao seems to have learned the ninja beam from working with Hien over the years. Mao Mao is a secret character and can be unlocked by punching in a really long code during the intro when you first turn on the game.

Spanky flies a highly experimental aircraft, and as a result plays the most obtuse. His regular weapon, the beam sabre, does as much damage as a special, except you have to practically crash into a target just to get it to hit. He also has phoenix missiles, which are always useful, and those worthless air mines. At least his special does considerable damage too. Spanky also has a very annoying voice, though this may be expected because he is a dolphin. 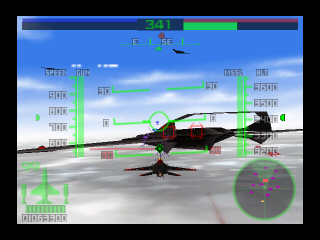 One of the main criticisms with Aero Fighters Assault is its immense difficulty. Enemies are typically very fast, some of them far quicker than any playable character. It can be very hard to get a lock on them and they like to tail you when you’re in the middle of fighting a boss. They tend to pick off your wingmen, who despite surprisingly competent AI, go down if overwhelmed, which will happen a lot. Bosses are also very tough, some taking more than five minutes to destroy, which can be a pain because most levels have a time limit and some enemies will not leave you alone.

The level design is usually wide open with the occasional building or mountain to crash into if you’re not careful, or there is cloud cover for enemies to hide behind. The exception would be the ice cave, which is linear. It has you moving through a cave of ice in a straight line and plays closer to a rail shooter than a flight simulation. It also has a wide open area at the end for a boss fight. 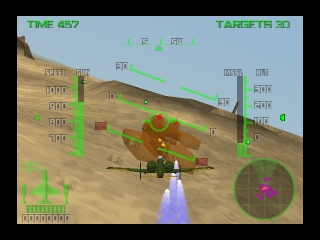 There are around seven levels in Aero Fighters Assault, with three bonus levels. If you don’t score enough points, then you will not get the bonus levels. The bonus levels, surprisingly, are pretty easy. The first one has you air dock with the base and the other has you defending it. Doing the bonus levels is the only way to get to the actual last level and fight the secret final boss in space.

Whenever you finish a level, you get graded on how well you did and receive a score to reflect it. Extra points are awarded for having a full health bar, conserving your weapons, keeping your wingmen alive, completing the level with time remaining, and destroying enemies. It is a lot more complicated than 2D shooter scoring systems and can lead up to some ridiculous scores.

Besides the main game, there are a few extra modes too. Practice mode has you flying through rings, which can help you get used to the controls. Vs. mode has you fighting computer controlled planes in dogfights. This mode even has a high score and can be good for practice fighting those hard to hit enemy planes. “Boss Practice” has you shooting targets that look just like the bosses, but they won’t fire back and their weak spots are visible. Along with “Boss Practice” is “Boss Attack,” where the weak spots on the bosses are invisible as normal, and they actually fight back. All of these modes are helpful for practice if you are finding the main game too hard. There is also a deathmatch mode, which is basically multiplayer. You unlock more planes in deathmatch by completing levels in the main game. 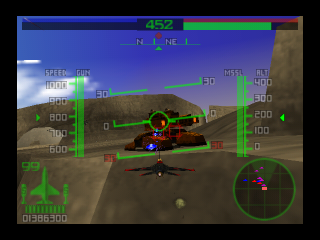 Aero Fighters Assault handles saving data in a very strange way. If you turn the game off in the middle of a mission, the game will auto save and remember which level you were on. It’s very flexible and ideal if you have to stop playing immediately for whatever reason. It does not auto save your high scores, though. You have to rank in first just to see them.

Aero Fighters Assault was not a huge success and was mostly ignored when it came out. It’s still regarded as one of the better console flight sim games, seeing as good console flight sims are few and far between.

Many of Video System’s workers, especially the Aero Fighters team, went on to form Psikyo. Aero Fighters‘ influence can be seen in much of their work, the planes being prevalent in Strikers 1945 and the odd sense of humor and personality in Sengoku Aces and Gunbird. Like Aero Fighters, many Psikyo games have crossover elements, though they are to a much lesser extent.

Four years after releasing Aero Fighters Assault, in 2001, Video System filed for bankruptcy. Even though they are out of business, companies such as Hamster and Monkey Paw Games have their titles on various download services. It makes normally obscure games readily available for anyone interested.