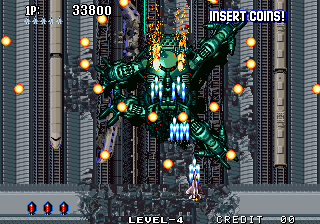 Aero Fighters‘ sequel came to the Neo-Geo MVS providing somewhat more power to show additional enemies and power-ups on screen with less slowdown, as well as scaling for sprites that allowed for some pretty neat bosses. When playing in two-player mode, players may select any character they wish, in any combination, unlike the rest of the series, in which each character has a designated partner. This leads to a lot of endings, the most in the series.

This game supports the Neo-Geo’s region detection system. If played on a Japan or Asian-region system, the title screen goes by its Japanese name, Sonic Wings 2. If it’s anything else, it instead goes by its worldwide title, Aero Fighters 2. 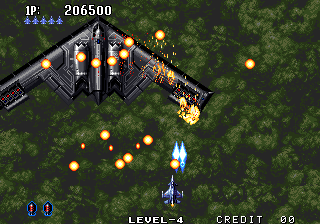 The storyline, characters, setting and tone, in general, get a lot sillier and wackier in Aero Fighters 2, and stays with it for the rest of the series. Before, the silliest it really got was the giant monkey that served as a hidden final boss. Great lengths were taken in order to make Aero Fighters have a sense of humor to distinguish itself from the many other arcade shooters out at the time. This is most evident in the new lineup of characters, which not only do a few characters return, but it has a lot of new ones too.

“I hope this new body works as good as my old one.”
Keaton from the first game returns, as a rather silly-looking head-in-a-jar mounted on a robot body, with an arcade stick and buttons mounted on his chest. His weapon is a straight-fire machine gun, combined with napalm bombs that seem to work best against ground targets. His bomber attack calls an orbital laser to sweep the immediate area. Keaton oddly only receives the “Robo” designation if the Neo-Geo is of US or European region – in the Japanese version he’s just Keaton.

“I am a retired top gun. Let me show you my skill.”
Sporting a thick mustache and a parrot, Silver’s A-10 comes equipped with a powerful straight-fire machine gun, and his bomber attack drops a tactical nuke that lingers on screen for a second.

“I am a ninja. My life is lonely and difficult.”
Hien (or “Hi-en,” spelled with a weird added hyphen in the worldwide release) remains mostly the same as in the original Aero Fighters, except his machine gun will now always fire kunai, with homing shurikens becoming available at higher weapon levels. His bomb attack is still a gigantic laser, which is somewhat more useful now, despite seemingly doing less damage for a slightly longer period of time.

“Hi, I am Mao Mao. I’m volunteering to fight.”
Mao Mao returns to the fold having swapped her old pilot uniform for a fancy dress. Her F-15 Eagle is mostly unchanged from the previous game, except her EMP bomb will now destroy weaker enemies as well as stopping absolutely everything for a few seconds. She is extremely useful in two-player mode, when combined with a bomb from any of the other characters.

“I want to have some fun. I will be watching you.”
An unlikely duo consisting of an adorable little girl and a uniformed UN peacekeeper, Cindy (or in Japan, “Cincia”) and Ellen pilot an F-14 equipped with a pulse cannon and the ability to call a carpet-bombing air strike. At max level, homing missiles are added to the main weaponry. In the Japanese script, Cincia’s lines tend to have hearts appended to the end of them (awwww).

“I am the world’s first dolphin pilot.”
Perhaps the series’ most unlikely hero, Spanky the dolphin (or Whity in Japan – there’s probably a good cultural reason why his name was changed) is nearly always flying an experimental jet equipped with some form of marine-themed weaponry. When maxed out, Spanky’s guns also shoot flying naval mines that can be grabbed by flying into them, and thrown by moving in any direction and pressing ‘fire’. They’re difficult to use, but very useful for piercing boss defenses. His bomber attack generates a large riptide across the screen, which deals more damage towards the center of the screen than on the edges.

“I am a punk rocker, and I fight for justice.”
A somewhat androgynous visual-rock idol of some sort, Steve (or in Japan, “Anjera”) would almost win the “most bizarre” award, were it not for Spanky (above). Steve’s main weapon is a rapid-fire laser that is augmented with spread-firing missiles at higher levels, and his/her bombs explode into miniature black holes that stay on the screen for a while and absorb smaller enemies and bullets. Functionally, it’s not that much different from Silver’s tactical nukes, but the “black hole bomb” wins points for aesthetics.

“My name is Bobby, and I’m one tough baby.”
Introducing the world’s youngest Royal Air Force pilot, so young he still wears diapers and is apparently bottle-fed. There is nothing “baby” about his FRS.2 plane, though – Bobby’s main weapon is seemingly the only spread-firing weapon in the game, and is also side kicked by dumb-fire missiles at higher levels. His fire bombs explode at a slight diagonal angle. Bobby seems intended for a full-screen support ship, rather than a boss-eating powerhouse, so he’s probably best reserved for two-player mode (perhaps accompanied by Mao Mao). In Japan his name is actually Arthur, presumably after the legendary King Arthur. 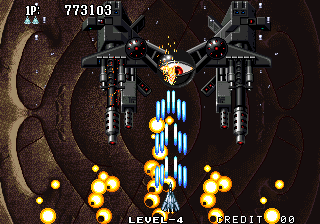 Aero Fighters 2 seems to drop the “rival countries” idea from the first game, allowing players to pick any combination of characters they want, and sending them through the same stages in the same order regardless of character selection. Currency symbols are still used as bonus pickups, but they are now specific to the stage instead of the character. Amusingly, between missions in two-player mode, regardless of what combination of characters you pick, there is unique dialogue between them, though it does get somewhat “Engrishy,” especially with Mao Mao and Spanky.

There are 10 levels in Aero Fighters 2 spanning all across the world from Japan to New York, to Australia and many more places. The New York level has not particularly aged well, as you can not only blow up the World Trade Center, but you can also find bonus points lying inside the smoking remains. You can also find Rabio from Video System’s other shooter Rabio Lepus appearing as a carnival ride at Coney Island.

There are also two bonus levels where helicopters and missiles fly in really fast and drop loads of power-ups for you to collect. The possible final bosses are a creepy giant eye, a ghost that looks like a kid’s crayon drawing, and a giant cartoon fish that is very hard to trigger and hardly even attacks. Aside from the stupid fish, this is a pretty cool feature and is heavily expanded upon in the next game.