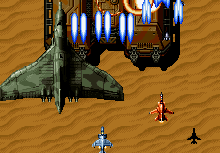 The Aero Fighters series, known in Japan as Sonic Wings, was started in 1992 by arcade developer Video System. It’s a globe-spanning, vertical-scrolling shoot-em-up that borrows a couple elements from fighting games, and notably uses (mostly) real fighter jets for its characters instead of the typical space ships. Most of the team at Video System that worked on the series moved on to Psikyo to work on the Strikers 1945 series. 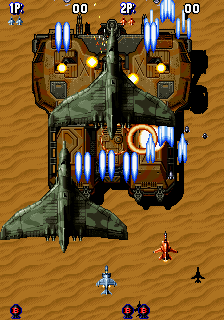 At a glance, the Aero Fighters series looks like a pretty generic military style shoot ’em up. If you can take the time to look at more than the box art and a few screenshots, you’ll find that Aero Fighters has very heavy elements of comedy, such as dolphins flying planes, landmarks that turn into giant robots, a large cyborg ape that can clone itself as a recurring boss, and crossovers with many of Video System’s other series. While Aero Fighters‘ comedy is very prevalent, it is not as overt as Parodius or other similar games, as there are still plenty of serious moments too.

One major aspect that sets Aero Fighters apart from most shoot-em-ups is that final bosses are decided at random. This is true for all games in the series except Aero Fighters Assault. The rarest ones are typically the joke bosses or are cameos from other games by Video Systems. 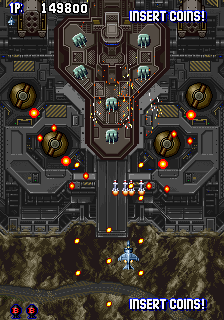 The first entry in the series gives players a selection of four sets of characters, for a total of eight planes with different weaponry and bomber attacks. Most of the characters’ shots will morph as power-ups are collected. Outside of this, it’s a pretty straightforward shooter, with no scoring gimmicks, charge shots, or other assorted things – just basic blowing stuff up. A big part of Aero Fighters, though, is its handling of two-player modes. Character selections are tied together by country, so whatever player one picks as the country, player two is assigned it as well. Each country has two unique characters, one for each player, and each with unique shot and bomb attacks, plus their own strengths and weaknesses. Also of interest is that the order of stages differs depending on which character you select.

In Japan, this game was known as Sonic Wings, however, when released worldwide, the game was renamed to Aero Fighters, which stuck for most worldwide releases throughout the series.

Two USAF pilots, Keaton and Keith fly the F-18 Hornet and F-14 Tomcat, respectively. Keith’s red plane moves a bit quicker than Keaton’s. Keith’s weapon is a straight pulse that increases in width as it powers up, and his bomb attack is a swarm of bombs pelting the ground. Keaton’s weapon is similar to Keith’s, and his bomb is a single tactical nuke.

Hien, a ninja flying ace from Japan, flies an FSX fighter jet that fires shurikens like a machine gun. As his weapon powers up, the shurikens begin to shoot less accurately, causing them to fire over a wider arc. At max level, Hien’s weapon fires much faster kunai instead. Powering up also adds homing missiles, which don’t do much damage, but are handy for disposing of the “popcorn” enemies quickly. Hien’s bomber attack is a straight-firing laser beam that fires for about three seconds and severely damages anything in its path. Mao, Hien’s famous singing idol partner, flies an F-15 Eagle that has a more traditional bullet-based weapon that is augmented with twin lasers as it upgrades, and her bomb is an EMP that stops the screen scrolling for several seconds.

Basically a Viking in a plane, Kohful flies the unique AJ-37, which has a standard machine gun like Keith’s, and his bomber attack is a pack of eight giant homing missiles. His partner, a robot named Tee-Bee, fires large singular plasma bolts with every press of the ‘fire’ button, as well as sending out a number of slow-moving explosive drones that fly in circles until they hit something, and his bomb causes giant pillars of fire to erupt from the ground. Tee-Bee also appears in Video System’s strange volleyball game Power Spikes II as a referee.

The job of fighting for the RAF appears to have fallen to Britain’s royal family, as Villiam and Lord White scramble in the AV-8 Harrier and the IDS, respectfully. Villiam’s gun is a spread-fire machine gun that has a very wide arc of fire, but not many shots to it, and his bomber sends three stealth bombers overhead to carpet-bomb the immediate area. Lord White’s IDS has a basic straight-fire machine gun, and his bomber shoots six cluster bombs in various directions. Lord White had a previous appearance in Video System’s other shooter Rabbit Punch, though not as a playable character.

Exclusive to the SNES port (see pics below) are Rabio and Lepus, the two playable characters in another Video System’s shooter, Rabbit Punch, or Rabio Lepus in Japan. They are a kind of mascot for Video System’s, appearing in many Aero Fighters games as either a playable character or a cameo. Rabio and Lepus play exactly the same, getting a satellite that rams into enemies at higher power levels and having a bomb that fires in circles around them. Rabio ends up appearing many times later on in the series, while Lepus only appears in the SNES port of the first game. 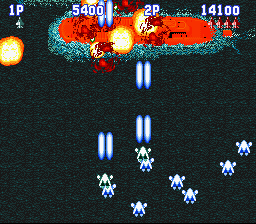 Aero Fighters shows signs of a more modern shoot-em-up formula, as power-up and bomb items are relatively frequent, and only one is dropped upon death. Score items are present but do not have a multiplier, and their shape depends on which country the player selects at the start of the game, as it takes after said country’s currency (the American dollar, the Swedish kronor, etc.). Controls are pretty tight, no complaints here. Music comes in a combination of FM synthesis and digitized drum and electric guitar samples, and is your typical rock-and-roll fare, without anything really memorable to offer. What should be noted, however, is very occasional slowdown, especially if both players use their bombs at once.

There are seven levels, taking place all over the world. While the series hadn’t quite developed the sense of humor it would later be known for, it does have some pretty cool stuff, like the Kremlin in Russia being a secret missile silo guarded by flying hover pods. It still does little to stand out from other shooters out at the time, and could easily be mistaken for other games. 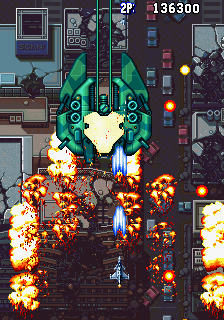 The Super Nintendo port, published by Video System themselves in Japan, and McO’River Inc. in the US, is actually surprisingly accurate to the original game. The screen space is a little shorter than the arcade version, and some of the bomb attacks seem a little chunkier, but the port is pretty solid. It comes with a couple of special features that are not in any other versions of the game, such as Rabio and Lepus as playable characters and a hidden boss mode where you only fight bosses. Both of these features are unlocked through codes. There is also a hilarious goof where, if looped on hard, the second loop will switch to easy mode that is present in the Japanese version. The music seems to have taken a hit, primarily due to the developer’s use of the typical Mega Man X-style electric guitar samples, which takes some of the melody out of the tunes. The Japanese version features a pretty neat scrolling-cloud effect beneath the Sonic Wings title, which the American version lacks. The SNES version had a very short run and as a result, is very scarce and is one of the hardest Super Nintendo games to find.

Sonic Wings was also on the PS2, under the title Oretachi Game Center Zoku Sono 6: Sonic Wings. It came loaded with extras, such as a soundtrack disc, a guide book, a DVD with a video showing an expert beating the game, a replica of the original arcade flyer, and a trading card. The PS2 port was published by Hamster, a company that specialized in porting old arcade classics, such as Thunder Cross and Castlevania to the PS2. The Oretachi Game Center series never left Japan, and Sonic Wings is no exception. Hamster would later port other old games such as Rapid Angel and Gaia Seed to PSOne Classics on the PlayStation Network. 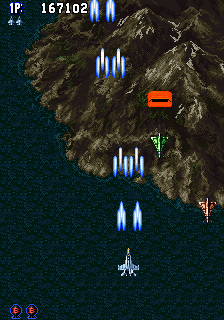 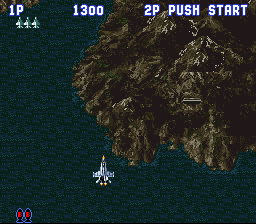