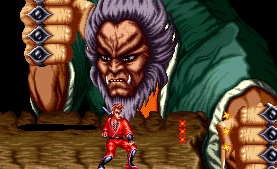 Ninja Combat is an early beat-em-up for the Neo Geo. While it looks fun on the surface, it’s actually very tedious and repetitive even compared to its predecessors. It’s also a major misstep from ADK, a developer that made some fun games in the 80s and would later go on to make the hit World Heroes series on the Neo Geo. ADK became an exclusive developer for SNK hardware like the Neo Geo after being instrumental in the design of the hardware itself, but outside of the World Heroes series their games are generally unknown to all but fans of the Neo Geo system. With a Neo Geo debut like Ninja Combat, however, it’s easy to see why it was quickly forgotten.

Ninja Combat was one of the first games released for the Neo Geo, and while the visuals are impressive compared to other console games released in 1991, they’re generally mediocre when compared to later Genesis and SNES titles. Backgrounds are colorful and varied, with some fun scaling effects as characters run into or out of the stage regularly. The sprites and characters, however, are pretty ugly. There’s an inconsistency to the character designs where the bosses, main characters (red and blue ninja named Joe and Hayabusa), and some enemies are drawn in one style, but many others have cartoonishly large heads or other stylistic differences that clash with everything else in the game. It actually appears as if some may have been copied from an older ADK beat-em-up called Gang Wars. ADK regulars Tsutomu Maruyama and Hatsue Honbe directed and did character design work for both games respectively, but it still seems like an awkward decision. ADK was instrumental in designing the Neo Geo’s hardware, so you’d think projects by ADK itself would take better advantage of the platform’s power instead of recycling these clunkier designs.

Where the game really falls apart though is with the controls. Instead of having multiple attacks that you can level up individually between stages like in ADK’s own Gang Wars, Ninja Combat takes things in a bizarre direction. You press the A button to fire a spread of shuriken. No combination attacks, no way to grab or throw an enemy, you just mash the attack button and it does the same attack over and over again. You can, however, perform a super move by holding the button down for a few seconds. These are different for each character, but since you lose some energy each time you do it, and so many enemies confront you at once, it can be easy to get lose a life from new enemies entering the area just as the move’s animation finishes.

You can jump also, but your jumping attack is exactly the same as your standing one, so there’s actually no reason to perform it throughout the game. Your final trick is an evasive somersault performed with the C button. Brilliantly, your character is not invulnerable while doing this, so hitting the C button usually means you’ll take additional damage instead of actually evading anything. The real trick is that if you hit the A button right after doing this, you’ll dramatically fling yourself across the screen with a diving attack. Enemies can still hit you during this move, but at least it will damage anyone you fly across in the process. Finally, Joe and Hayabusa can pick up some weapons which, while lacking in range, let them attack very quickly compared to their regular shuriken spread.

In general, the best thing to do is to mash that A button as quickly as possible. Enemies are very resilient, and the larger ones take so many hits that it’s a matter of when rather than if they’ll be able to close in and hit you before you take them out. The bad thing here is that many enemy attacks can actually lock you in an infinite loop where you’re unable to do anything until you run out of energy and have to feed the Neo Geo another quarter. The most brazen way the game shows its desire for your quarters, however, is with its power up system. You can pick up scrolls that increase your speed and your attack power. These are pretty cool, with increased movement speed you can actually evade those rapid enemy attacks and your dive move becomes more useful. You can also defeat enemies noticeably faster. The problem is that you lose ALL of them every time you lose a life.

Similar to the NES version of Double Dragon III, three of the game’s bosses are actually more than happy to join you after you beat them. First you get Musashi, a samurai conspicuously overdressed for the amusement park you fight him in. He’s actually much better to use than Joe or Hayabusa as his default attack is faster. He also has a nice dive attack, which is useful for hitting enemies multiple times while still getting you out of danger.

Later on you recruit a heavyset brawler named Gembu. This guy’s gimmick is that instead of a dive attack, you just tap the C button and he charges forward, damaging anyone he hits. This seems awesome, except that he runs such a short distance and the damage is so low that it’s a great way to get hit by the same enemies you were trying to defeat. His regular attacks are also too slow to be really effective. 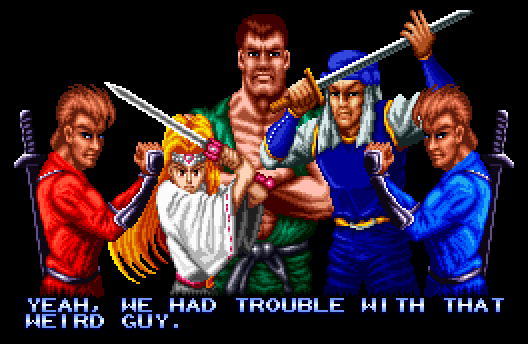 Finally, there’s Kagurow, an awesome woman with a broadsword who commands a group of amazons that ride in on a modified 18 wheeler out of a Mad Max movie. Her default attack range is huge, shooting out small tornados from her sword with every tap of the button, and her super move has the widest coverage of the four characters. In addition, instead of diving across the screen she can perform a spinning sword attack that is extremely useful. She’s also notable for the game’s translation depicting her as ambivalent about everything. At one point you fight a bunch of Jun Suemi-esque guys that can shoot gas out of the “mouth” part of their elaborate gas masks. This culminates in a battle with a giant with two Noh theater masks for a face that wields a missile as a club. Her reaction to this after the fight is done is “Yeah, we had trouble with that weird guy.” On top of that, she’s not even possessed or deceived by the game’s villain, Genyohsai, like Musashi and Gembu were before you beat the brainwashing out of them. Instead, she attacks you because she’s “testing your power” to see if you’re worth teaming with while she fights to take down Genyohsai anyway. This character definitely should have been reused in a better game than Ninja Combat. 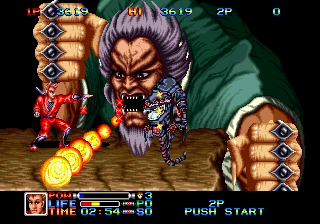 Ninja Combat‘s music was composed by Hideki Yamamoto and Hiroaki Shimizu, two members of a trio responsible for some of ADK’s best soundtracks, though it fails to really stand out compared to World Heroes or Magician Lord. The missing link here is Yuka Watanabe. She has a short resume, but has done composition and sound editing work on a wide range of games from Gang Wars to Castlevania: Lament of Innocence. It’s a shame she didn’t do more work for the Neo Geo, as it would have been great to hear compositions on par with her older ADK work arranged with SNK’s superior FM synth hardware.

Ninja Combat would unfortunately be ADK’s final beat-em-up, as they devoted themselves to 2D fighters on the Neo Geo and sports games on the Neo Geo Pocket Color afterwards. They did develop the outstanding shooter/puzzle hybrid Twinkle Star Sprites, and it’s a shame that, by working exclusively for SNK they weren’t able to try more experimental ideas like what we see in that game or otherwise capitalize on the concepts in their pre-Neo Geo games like Sky Soldiers and Sted. The game has appeared on the Wii Virtual Console, and is also available via the ADK Tamashii compilation for the PlayStation 2, which was also released on the PSN as a PS2 classic for the PlayStation 4.