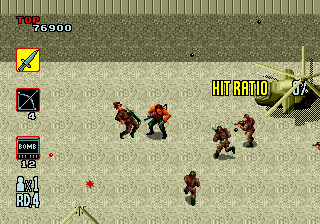 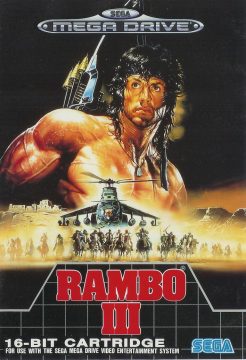 Take this analogy – Rambo: First Blood Part II for the SMS is to Commando as Rambo III for the Genesis is to Mercs. It’s a much faster paced game with multi-directional scrolling and more weapons. Your rapid fire machine gun can either be fired straight forward when moving or sprayed out by standing still. You also have a knife, a limited supply of arrows, and some C4. The weapon selection is a bit awkward – the C button will always use the machine gun, while A selects between the three subweapons, and B uses it. Since the knife is useless, why not just assign A to the arrows and B to the bombs? 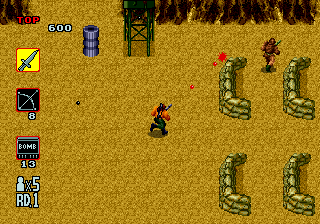 There are six levels in total – some of them simply require getting to the end of the stage, while others have a specific goal. In these levels, you need to wander around maze-like stages, freeing prisoners or destroying enemy munitions. These levels end up being long and boring, because you’ll usually need to backtrack through areas multiple times unless you know exactly where you’re going. There are a handful of boss encounters, where the viewpoint changes to behind Rambo, as he uses arrows to destroy tanks, choppers, and other large vehicles. These segments are brief, and seem to really only show off the graphical prowess of the Genesis. If nothing else, it makes up for the rest of the game, which has fairly uninteresting visuals. The two player simultaneous mode has also been ditched in favor of alternating play. For a first year Genesis title, it’s not too bad, but Mercs ultimately blows it out of the water.