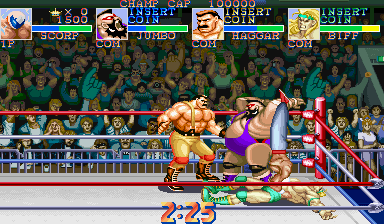 Throughout the years, several heavy hitters had entered the virtual wrestling arena for a chance to be crowned the champion of wrestling video games. From the king of wrestling games, Human, to the creators of Double Dragon, Technos Japan, the landscape had begun to stack up with several names of notes, all with their own takes that varied wildly from one another.

But one company in particular, was still missing from the battle, to the surprise of many. Two years prior, Capcom had set the arcades on fire, and singlehandedly made fighting games the most popular genre in the entire world. But in wrestling, they had yet to make their mark. That is, until Muscle Bomber.

For Capcom’s entry into the world of wrestling, the decision was made to make the game tie into the fictional world of Final Fight and Street Fighter, effectively taking place prior to Mike Haggar’s, Final Fight’s protagonist and Mayor of Metro City, election into the higher office. As such, a good number of hints to other Capcom characters could be found in the game, something which would eventually cause great confusion during localization. Another confusion stemmed from the game’s own storyline, which dealt with the rivalry between wrestling factions, and the subsequent disappearance for Victor Ortega, the centerstone of CWA. Ortega was prominently displayed on the game’s opening cinematic, though did not appear in the game as a playable character, causing the game to take on a near Mortal Kombat stage of rumor mill with Ortega supposedly unlockable. 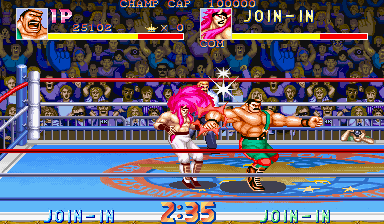 Famously, the game makes use of the incredible talents of Tetsuo Hara (Fist of the North Star) who, despite often cited as the character designer for the game, was actually employed to do the promotional art for it, and used suburban New York and American films such as Death Wish as his inspiration for the artwork. Additionally, Hara directed a promotional commercial animation for the game’s eventual home console release. The actual character designs were done by Eri Nakamura, Takashi Hayashi and Yusuke Yamamoto, while Akiman, the designer from Street Fighter II, assisted in the creation of Haggar and Missing IQ Gomez.

The cast of characters, all of whom are brand new save for Mike Haggar, are a surprisingly refreshing take on many of the usual suspects of inspirations. The game’s Ryu and Ken characters are the young and handsome duo of Aleksey Zalazof (US= Biff Slamkovich) and Lucky Colt (Gunloc), while Mysterious Budo (Great Oni), Titan the Great (Titanic Tim), El Stinger (El Stingray), Sheep the Royal (Alexander the Grater), Missing IQ Gomez (Rasta Mon), Kimala the Bouncer (Jumbo Flapjack) and The Astro (The Scorpion) round out the cast alongside Mike Haggar from Final Fight. Haggar’s daughter is also seen in a cameo in Haggar’s winning celebration.

Of note are the designs of Missing IQ and Sheep. Sheep, on his side, is a striking replica of real life wrestler Vader, down to the Mastadon mask on his way to the ring. Missing IQ Gomez however, is a hairy savage from the Dominican Republic with his pet monkey, Freak, always by his side. His design, quite famously, is based on Akiman’s second draft design of Blanka in Street Fighter II. The Astro’s mask also bears a strong resemblance to Tinieblas, one of the first true Mexican superstars of Japanese wrestling. 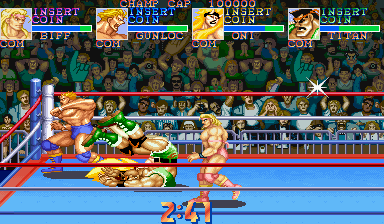 Rather than transplanting Street Fighter’s six button system over to the wrestling arena, the game makes use of a new three button system, with a punch, kick and jump/pin button resulting in an easier overall controller scheme, though with certain nods to its Street Fighter counterpart with the use of half circle/full circle and charge motion for special moves. Double tapping the d-pad will result in the wrestler dashing towards the ropes, with the dash eventually making its way back into the Street Fighter series. When the wrestlers touch in close quarters, grapples will be initiated, which require the expected directional input and button mashing. Each wrestler also controls quite differently from one another in terms of speed and move ability, another Street Fighter trait which makes a welcome addition to wrestling gaming. Additionally, each character is unique, with a full set of individual move animations.

The game itself allows for two modes of play, Single Match and Team Battle Royale, with the latter being a tornado tag (every man in the ring) match in which up to four players can join. In Single Match, the action can take place in and outside the ring, with the outside area often having chairs and other weapons to be used to take down the opponent. The audience can also toss new weapons into the ring by throwing the opponents into the guardrails. In the ring, the game is a hybrid between Street Fighter and Mat Mania, allowing for full movement throughout the arena, while retaining a lot of the balance and finesse of Capcom’s other 2D fighter. Prior to each match, a full entrance takes place, with each character being given their own entrance theme and animations to pump up the crowd.

Muscle Bomber received a few ports. Released first for the Japanese home console FM Towns in the following month of the arcade’s release, undoubtedly to increase revenue from the lacking interest at the Japanese arcade. Despite popular belief, the FM Towns version is in fact not arcade perfect in the slightest, as the game has less frames of animations, only single match gameplay and eight of the ten characters playable. Most notably for this version, the game makes use of redbook CD audio with arranged variations of the arcade music are not heard outside of this release. 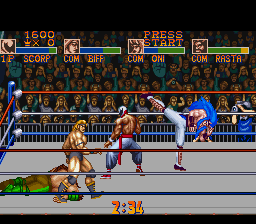 The SNES release is by far the best home conversion the game would receive, and generally seen as one of Capcom’s best 16-bit conversions of their arcade library. Featuring all characters, moves and match types from the arcade, the game only lacks the four player option. The localization for this version, however, is where the game reaches infamy in the Street Fighter community. Alongside the complete name changes for all characters, save for Mike Haggar, their backstories were also greatly altered. Gunloc, the game’s blonde haired muscle hunk, was given the backstory of being Guile’s brother, a relationship which Capcom of Japan would never echo nor accept. Further confusing the bloodlines, the eventual home console release of Street Fighter: The Movie (The Game) would have an exclusive character named Blade, one of Bison’s silent henchmen seen in the film. Upon completing the game with Blade, it was revealed that this character was in fact Gunloc, working undercover to assist Guile in the shadows. None of this would ever enter established Street Fighter canon.

The Genesis release (fifth and sixth screens in the right column) would see some unfortunate downgrades from the fantastic SNES release, despite being released well over a year later. With the system’s limited color palette, the game looks noticeably drab compared to its counterparts, and the Battle Royale match has been replaced with the new exclusive Death Match, featuring electric barbed wire ropes. Overall, the game lacks the polish of the SNES version, being slower and having much less enjoyable music.

Muscle Bomber was arguably much more popular in the west than in Japan. As a result, Capcom USA embraced the game and expanded upon its story and characters. Gunloc would also appear alongside Great Oni and Titanic Tim in the ill fated Street Fighter cartoon series on USA Network, in the episode “New Kind of Evil”.

One of Capcom’s finest games in the wake of Street Fighter II, Muscle Bomber would for many remain the greatest wrestling game of the 16-bit era.

A methodical wrestler, and arguably the main character of this game. His simple yet effective style has won him many a match. Friend and rival of Gunloc. References Zangief in his losing quote.

A reckless ill-tempered friend and rival of Biff Slamkovich. Rumored to be a brother to Guile from Street Fighter II, though Capcom has said this is not the case. If Biff is Slam Master‘s Ryu, Gunloc is it’s Ken. They have similar, but not identical, movesets.

Former rugby and American football player, and current wrestler. Possibly based on Vader (the wrestler, not the Star Wars character). He was turned into a butcher in the American version.

A man who was raised by apes, like Tarzan, and watched cartoons to learn English. He is the original design for Blanka from Street Fighter, and he even shares Blanka’s brutal face bite attack. Possibly based on Bruiser Brody.

A fast wrestler with several aerial attacks. Looks like a kabuki actor. He is somehow able to utilize his hair (!) as an effective weapon. Possibly based on Great Muta, AKA Mutoh.

An absolute behemoth whose name is a play on Tiny Tim. Former tag team partner of Birdie from Street Fighter. Their tag team was called “500 Trillion Powers”, a parody of the Hulk Hogan/Randy Savage tag team The Mega Powers. Possibly based on Giant Baba.

A very fast masked wrestler who has several aerial attacks. While small, his agility and technical skill is more than enough to compensate for his shortcomings. Rival of Great Oni. Possibly based on El Santo and Lizmark.

A sadistic wrestler who previously worked as a bouncer and a bodyguard. He is definitely the heaviest out of all the characters, and he also has the ability to spray mist. He shows absolute obedience to Scorpion. Possibly based on a wrestler named Earthquake.

Primary antagonist of the series. His identity is a mystery. While not the biggest guy in the ring, he has these freaky powers that endow him with dark energy and make him able to teleport. Possibly based on Tiger Mask and Black Scorpion. His mask also looks very similar to that of Tinieblas.

Referred to simply as Haggar, he is the main character of Final Fight. After his wrestling career ended he became the mayor of Metro City. His portrayal here is based on Randy Savage, and his ring name is even Mike “Macho” Haggar. His daughter Jessica (also from Final Fight) appears in his win pose. 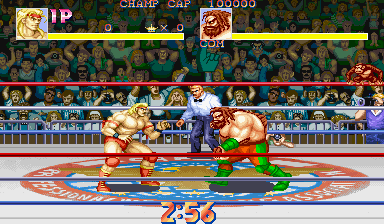 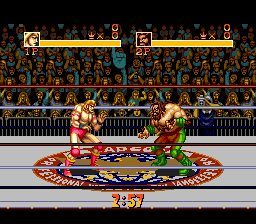 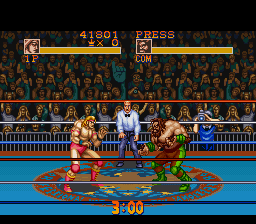 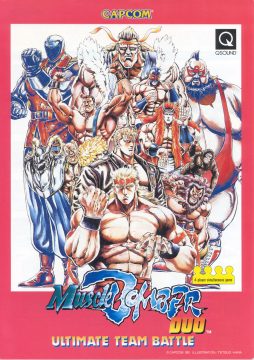 Muscle Bomber Duo is basically a “Champion Edition” that was only released in the arcades. The story here is that the CWA holds a tournament called “Heat Up Scramble” to decide which team will be champions of Team Battle Royal. Muscle Bomber Duo is Team Battle Royal mode from Saturday Night Slam Masters, with a few minor gameplay changes, which are thankfully all for the better. There are still three buttons, but the Pin button will also initiate a grapple, and the original method has been eliminated entirely. This rectifies problems that existed in the original with attacking when you mean to grapple instead.

Blocking can be performed by holding back after holding Attack, like in Capcom’s beat-em-up Knights of the Round. This makes Muscle Bomber‘s difficulty more fair than its prequel, and, best of all, makes it possible to avoid people spamming long range attacks. Even though 1-on-1 mode has been eliminated, Muscle Bomber Duo is definitely superior to the original Slam Masters. Capcom fixed everything that needed to be fixed in the original, and the result is a game that feels like it is what Slam Masters “should have been”. It is a shame that this was never ported.