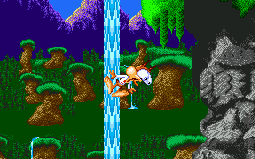 It was a tough time for platforming games back in the 16-bit era. Mario, the little guy who revolutionized the whole genre, had somehow lost his place to a smarmy blue hedgehog by the name of Sonic, whose blazing fast gameplay and bad attitude provided enough of a contrast so that adolescents could play it without feeling wussy. There were many contenders for this crown, many other would be-heroes that were shot down, despite being focus tested into oblivion. Yet one character, one furry little cat, went on to beat down both legendary mascots and claim the delicious crown for himself.

That hero was Bubsy the Bobcat (AKA The Bubster). 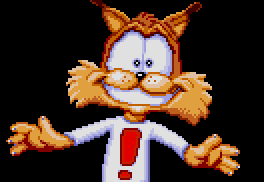 Bubsy was published by Accolade for both the Sega Genesis and Super Nintendo, taking both sides of the 16-bit console war and exploiting it for its own game. No longer excluding kids who could only afford one of the consoles, both critics and gamers everywhere proclaimed Bubsy to be an amazing triumph, a sight totally unseen in any other market of the video game sector. Bubsy’s zany antics warmed the hearts of kids everywhere, who began to demand more of the lovable feline in droves.

But how did such a character come out of nowhere, from a company that was known for computer ports and sports games, to become such a rousing success? The simple answer: they created a character that everyone loved. At first, they simply looked at Sonic, and saw that much of his personality was displayed through his animations, like the way he teetered at the end of ledges, or looked impatiently at the player if they stood still. The Bubsy folks took this and ran by creating even more wacky animations. The designers rationalized, since you often died in platforming games, why not make the player laugh at the same time? Therefore, several different death scenes were added – Bubsy would shatter, or squish like an accordion, or salute and admirably “go down with the ship” if he fell into water. Furthermore, these were the days before Mario or Sonic had voices. Bubsy was granted vocal chords, with a witty saying at the beginning of each level. “What could possibly go wrong?” Bubsy inquired at the opening of the first stage, of his first game, opening up a new level of hilarious immersion in video gaming. Many of the jokes revolved around brilliant feline related wordplay and puns. As the logo to the second game says – “Accolade: Games with Purrsonality!” 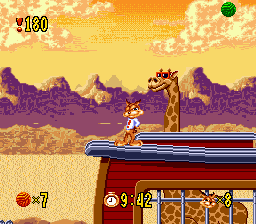 But what would all of this be without a solid game to back it up? Bubsy is one of the deepest, most involving, thought-provoking games of its era. You see…ah, who are we kidding, Bubsy is GARBAGE.

There’s a special place in hell for the people behind Bubsy. Not necessarily the graphics or sound guys, because they did their jobs. Not the programmers, because even though they weren’t very good at it and ended up creating a game that’s only occasionally playable, they were probably only doing it to get their paychecks. Not even the creators, who probably just wanted to make a platformer game that payed respects to the humor of old Warner Bros. cartoons. (The character and idea was actually conceived by Michael Berlyn, who had previously worked on several Infocom text adventures.) No, the worst people involved are the people who marketed the hell out of the concept, without any regard to the final product. Bubsy is the very pinnacle of exploited soulless corporate drivel, which shouldn’t be anything new. But it was indicative of a trend where marketing of a character – not a licensed character, but an original video game character – took priority over the quality of the game itself. And for any kids at the time who plunked down $60, hoping to discover the new Mario or Sonic, after having it hyped to hell and back in Electronic Gaming Monthly, would find themselves incredibly disappointed. 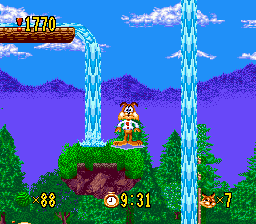 But that was only part of it. Bubsy himself was designed to have so much attitude that it was just impossibly annoying. The incessant voice clips were aggravating, especially since the same unfunny saying popped up after you died. But the character design himself just lacked charm. Just look at this:

His design is too engineered – a sly smirk, gigantic eyes, and an exclamation point on his white t-shirt that was essentially his “catchphrase,” as if a mere punctuation mark could fulfill that role. Sonic was basically designed to be an anti-Mario, which was precisely the image that Sega needed. And before Sonic’s hijinks devolved into absurd melodrama in the post-Sonic Adventure era, his character evoked a balance of cuteness and toughness that seemed fresh. But Bubsy doesn’t fit in anywhere in the console war, and doesn’t fit in with Accolade (who published..Ishido? Hardball? And mostly other junk for the Genesis). Bubsy’s lame design, combined with his hollow reasons for existence, along with the low quality of his games, resulted in a complete black hole of a character.

Through some cruel act of God, Bubsy somehow made it into four separate games, not including one portable version, then was resurrected in 2017 through some kind of misguided nostalgia. This is both saddening and infuriating, because the first game was apparently enough of a success to greenlight further installments, which means there are scores and scores of innocent kids that blew their potentially hard-earned money on a marketing gimmick with awful gameplay behind it. The only positive thing is all of the negative karma Bubsy has built up over the years – it’s regarded by pretty much everyone everywhere as a huge embarrassment, becoming the animal mascot of terrible animal mascot games. We are here today to look at the train wrecks that made up Bubsy‘s career, and we do so with no reverence, and absolutely no mourning. 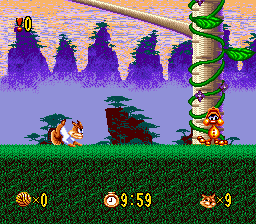 The original Bubsy is about as basic as you can get. You can run and jump and glide, and that’s it. Your objective is to kill the Woolies, an army of aliens who attack by (apparently) sneezing at you. There are sixteen levels total, taking place in a forest, a carnival, on a train, in another forest, and finally on the Woolies’ mother ship. Considering the size of the levels, this is actually a pretty meaty package for this type of game, and the password function makes it easy to jump back into the game. 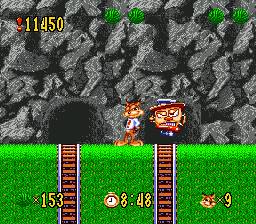 The problem with Bubsy, as noted several times, was that the developers simply looked at both Mario and Sonic and decided to create their own ripoff without being conscious of what really made those games shine. On a basic level, when jumping on small platforms, Bubsy controls relatively okay. It’s when you build up the tiniest bit of momentum that things fly out of hand. Your biggest foe is often Bubsy’s inertia, which will fling him forward at distances that are incredibly difficult to judge, and changing direction in midair is a futile proposition. You can glide, which makes it a little bit easier to control your landings, but ultimately, it doesn’t help much. So what good is a platformer if you can’t platform? 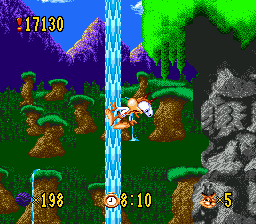 When you’re not taking to the skies, Bubsy can also run fast. Really fast. He can dash, up and down the landscape, except that the scrolling can’t show what’s in front of you, and the level design is so poor that you either constantly run into bad guys, or fall into some kind of obstacles that, nine times out of ten, will kill you. This is pretty frustrating – Mario had his mushrooms, Sonic had his rings, and Bubsy has squat. He will die instantly upon merely tapping a bad guy, which is further infuriated by the sloppy hit detection. Most of the times, you’ll jump on a bad guy and kill it. Except if you hit it just wrong, you’ll die, for some reason. Furthermore, this is one of the very few platformers will kill your character for falling too far, which seems to be a subtle way of telling you that you need to glide pretty much every time you jump, because it’s the only way to remotely control Bubsy. Considering how easy it is to leap and careen through the skies, into destinations unknown, finding a safe spot to land is a matter of chance – you’ll either die from falling too far, die from ramming into a bad guy, or maybe, just maybe, have a safe landing. And while there are several checkpoints in each level, they still don’t seem close enough, given how many times you’ll bite the dust. In a twist someone probably thought was clever, Bubsy is granted nine lives, so at least you have plenty of opportunities to beat the level, if you don’t give up in annoyance first. 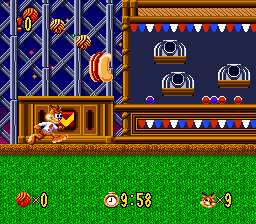 Each level is huge and has lots of stuff to explore and lots of doodads to pick up, but they seem to lack structure and cohesion. As a result, stages that should be fun to explore are just monotonous because one part of the stage doesn’t look any different from the other. And when they aren’t tedious, they’re confusing. 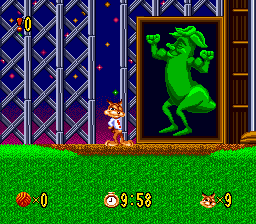 To be fair to Bubsy, there are actually many worse licensed platformers, and even some later animal mascot worse that are even lower quality.  At times, it’s almost a fun game, once you learn to get him under your control, but there’s still too many consistently cheap deaths for it to be remotely enjoyable. Plus, Bubsy is pretty bad but at least it runs at a stable framerate, while Awesome Possum does not. The best thing to be said about it is that there are still some more awful games out there.

Bubsy was released simultaneously for the Super Nintendo and Genesis. It seems to have been developed with the Genesis in mind, because both versions look practically the same. The SNES version has (arguably) better music and cleaner speech samples, but they both play in the same wretched manner. It was released in Japan for the Super Famicom under the name Yamaneko Bubsy no Daibouken (“The Adventure of Bubsy the Mountain Cat”). It also got a port to Windows 95 under the title Super Bubsy, which has some nicely improved high-res graphics, along with some additional narration. It seems to have problems working on anything past Windows 98, though. It also includes the pilot episode of the TV show (more on that later). 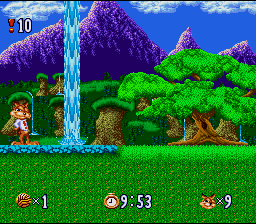 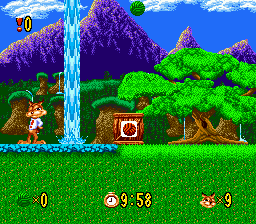