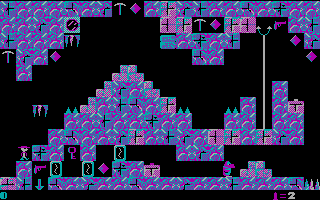 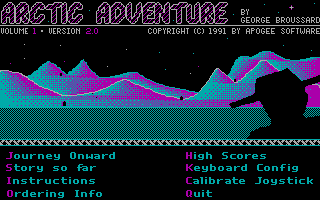 The sequel to Pharoah’s Tomb, although it’s nothing majorly different from its prequel. You are still Nevada Smith, and after being hailed as a hero of archaeology after discovering the pharaoh’s tomb in an Egyptian pyramid, you continue to the Arctic to find more secrets there.

While Arctic Adventure could be more described as an expansion pack to Pharoah, there are a few new features which make it a little less frustrating to play. There’s now a map screen where you can select the level you wish to play if one proves too challenging. Some routes are blocked off at first, and need keys to unlock them, however. The other change, even more of an improvement than the map screen, is that you now have unlimited lives. Since the amount of cheap deaths, either due to the controls or the traps are unchanged, this helps quite a bit.

The actual gameplay itself is almost just like Pharaoh’s Tomb. Instead of collecting keys, however, you find pickaxes to break through blocks of ice, and you collect pistols instead of spears. There are a few new gimmicks, however, such as buttons which add and remove blocks to the playfield. The projectile shooting walls have also been changed to look much more distinct, which cuts down to the number of deaths caused by them greatly.

The graphics are similar, although the sprites are changed to fit the game’s arctic theme. The pallete has also been changed to a pink and blue mix, which makes it look more like Easter instead of puke, so it’s kind of an improvement, in that way. The sound is also unchanged, for better or worse.

So if you enjoyed Pharaoh’s Tomb, as challenging and blatantly unfair as it was, but felt it was a little too tough, Arctic Adventure is a decent sequel. If you didn’t like it, however, there’s pretty much nothing in here that would change your mind. It was also released as freeware like Pharoah’s Tomb.