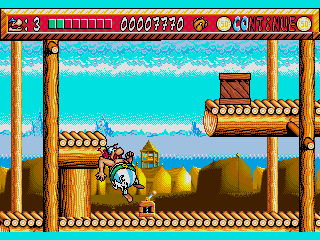 Astérix strangely always had a nature of jumping back and forth to different developers, which always resulted in semi-sequels to different games which all had quite big gaps in quality. Core had their chance earlier in 1991, and in 1995 they would yet again try to slap some sense in those pesky Romans.

Core had rather unsuccessfully tried to adapt the French comic into a platform game with Astérix and the Great Rescue. So when they got a second chance, hopes were that they would bring out a more polished product than what we had already seen, as their overall track record wasn’t necessarily a bad one. Astérix and the Power of Gods was released in late ’95 in France and early ’96 in the rest of Europe. It would be the last 16-bit adventure for Astérix as the next generation of consoles were on the horizon. 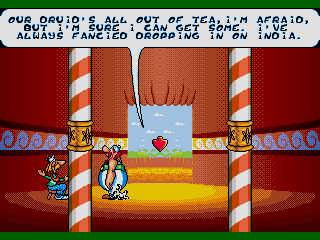 Astérix and the Power of Gods would follow the same formula that the other games had mostly been following. Astérix and Obélix are sent out to retrieve the shield that is used to hold up Abraracourcix the village chief. The search takes them through all the corners of the Roman Empire. This basic storyline is taken from the book Le bouclier Arverne (Astérix and the Chieftain’s Shield) and the opening cinema actually uses pictures taken directly from the book, which all look very nice obviously. However after the opening cinema, the game follows no strict storyline from any of the books, rather each level representing different adventures. This is all standard stuff by now in the Astérix video game franchise, unfortunately. There is an over world map this time and levels must actually be in a certain order as they often impact each other. You can enter and visit all levels, but some cannot be properly explored until a certain event has been triggered, a la Bionic Commando on NES. An example is that when you reach the end of the Gaul Forest, you fire a catapult with a fire stone inside. This stone travels over to one of the Roman camps and sets it on fire so that you can walk in beyond the gates.

Astérix and Obélix have an increased set of moves in their arsenal since Core’s last game. While their normal punch is still a laughable excuse for an attack, you can now grab stunned enemies and perform melee throws that take out all surrounding Romans much like what was introduced in TMNT: Turtles in Time. You can perform different kind of throws with simple button and direction combinations. There are also magic potions and wild boards laying around that give the duo new super attacks. You can also use environmental objects such as crates, cauldrons and massive bowling balls to take out lined up enemies and receive a wealthy amount of points. As for points, you usually pick up coins of varying sizes and fruit, though there are also hidden gems that cannot be seen but if you touch them, a huge number pops up onscreen with the amount of points it has given you. At the end of most levels, you will either obtain an object or speak with a character that will tell you where to go next, though at times their dialogue is a bit confusingly written and you’ll won’t be any smarter from the chit-chat. 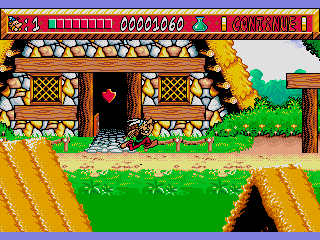 The game featured quite a wide variety of levels but it doesn’t take too long before they feel very similar to one another. Everything is out to kill you, even more so than before. The enemies are quite cheap and lead to some fury inducing moments. Romans come in different shapes and sizes. The most common enemy is the normal troops which you’ll find standing around. Their primary attack is running into you, which they’ll most likely succeed in as your attack requires them to be pixel dot next to you. The worst are those outside of view. Romans can shoot arrows, rocks, fire balls, anything you can think of at you without being in sight and plenty of these objects are instant kill. Even wild boars kills you instantly. The level layout is for the most part acceptable but too many of them run their concepts into the ground. Even the Gaul village, which acts as a points and health refill spot, is massive and has 5 different paths to take with none of them ever being necessary to visit. You can also be killed in the village by running into bonfires or moles with rage issues, which is quite annoying when you run low on life and energy. The level design is at times very good and feels fresh with scaling effects and puzzles a-plenty, but all the cheap deaths you’ll encounter will keep you from exploring them too much for treasures. The Pirate Boat is probably the best level in the game as it uses a special scaling effect that makes the ship rotate around. During this level, the screen shrinks in size in order to properly do this effect at full speed.

It really seems as if all the Astérix video game developers slept on the job when it comes to the last stretches of the game. Like in the SNES game, this one also features no end boss, no end puzzle, just find the shield in a treasure chest beneath the Roman bath. Just pick it up and the screen fades out. It was such an anticlimactic moment that it completely passed me by and I nearly prepared to assault my controller before realizing that the ending cinema was starting to roll. The last stage is probably the easier in the whole game because it barely has any cheap kills or large enemies. It’s a bizarre feeling to just stroll through the last level of a game and have it feel so non-threatening.

The graphics are more colorful and fairly faithful to the look of Astérix compared to what Core put out with in The Great Rescue, but there still an element of awkwardness to them despite the boost of quality. The characters look more like crude caricatures than faithful representations of their source material, and the animation doesn’t resemble at all their way of movement found in the books or movies. The music is done by Core’s Neil McGree and includes some catchy tunes as well as classical music which doesn’t really sound too good on the Genesis’s FM chip.

It’s certainly not the worst Astérix game out there, and it does some rather nice things for a Genesis game thanks to being released fairly late in its life cycle. The game is just simply not generous enough and makes no effort to invite players to actually take their times to seek out the hidden treasures and points to find because it will lead you to death. Finding all the treasures also brings little reward, with the only difference being that you get the highest score on the leaderboard for others to beat. Had it done more with the world map system and given you enough extra lives, it would have been a much better game, but in the end, it’s just a very linear, very difficult platformer which teases the feeling of self control over the progress. This would also be the last game to feature the Parc Astérix promotion.