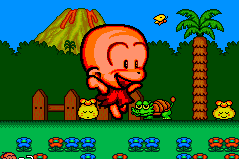 Besides some excellent multiplayer games on the TurboGrafx-16 – Dungeon Explorer and Bomberman in particular – there weren’t that many games that support two player action, mostly because the system only had one controller port and required an additional accessory for more players. Bonk’s Big Adventure is the first in the series to allow two player simultaneous play. Both characters share the same life bar, which is a little annoying, but the game’s much easier with two heads bashing enemies instead of just one.

The other big innovation is the ability to transform into Giant Bonk, or shrink to Tiny Bonk, by picking up colored pieces of candy. Giant Bonk is tough to manuever and is a huge target, but he packs a wallop. Tiny Bonk can get through small passages, but is obviously pretty weak. Additionally, if you’re squashed by certain bricks, you’ll be transformed into a crab for some reason, also allowing you to squirm into tiny areas. In his angered form, Bonk can also breath fire. You can also no longer move the yellow bouncing flowers. 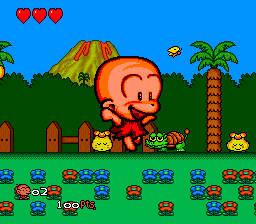 Unfortunately these additional power-ups just highlight the game’s biggest weakness – the level design just seems lacking after the first two games. It ruins the pace when you need to find a power up to shrink down, or find an enemy to hit you so you can change back to regular size. The Giant Bonk power-up just seems to exist to show off the graphics of the system, and it’s too cumbersome to use effectively, especially since you return to normal after a single hit. The setting also strangely deviates from the prehistoric theme, as Bonk goes through all kinds of random levels without much explanation, like modern day cities and warehouses. At one point, apparently you enter a giant’s house, and need to wander around supersized furniture. It’s not that there’s anything wrong with a bit of variety, especially given how well the usual themes were already explored in the first two games, but it still feels weird and out of place. At least some of the bosses look pretty cool, like the robotic crab near the end of the game. There are a few alternate levels, at least – certain fish can swallow you whole, leading you to a small bonus stage, which is pretty cool. There are tiny flowers that take you to various stages, much like Bonk’s Revenge. There’s also eight more bonus levels you can choose to play at the end of each world, as long as you’ve collected enough smileys. 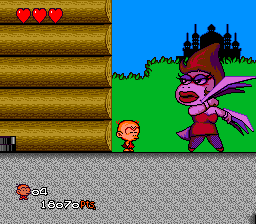 Bonk’s Big Adventure technically has most of the same ingredients as its predecessor, but the lacking level designs and mostly useless power-ups render this one of the weaker titles. Much of these seems to be due to the fact that it was outsourced to a different developer, a company named A.I. Ltd who also worked closely with Hudson, rather than Atlus. Strangely, while the game was released on HuCard in both North America and Japan, the Super CD version was only released in America. It’s basically the same game, with the addition of redbook audio music and some extra two player mini games, like a wrestling tournament and a volleyball match. Both North American releases are extremely rare and expensive, due to them being released at the end of the system’s life span in the territory.