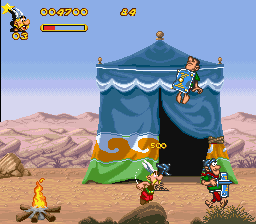 Whenever you have a team of brothers or dynamic duos of any kind, the supporting member of that team up is bound to become the underdog that a big portion of the fan base will embrace and relate to more so than the main character. Over time we’ve seen games featuring Luigi, Tails and Diddy Kong which established the fact that underdogs do have a loyal fan base which will support the games they star in. Astérix was certainly not excluded from this fact, and Obélix would often be cited as a personal favorite among a big percentage of the fans. Though he had already gotten his own game on the Atari in 1984, video game had evolved since then, and so it was decided to yet again let the blue blob-like Gaul have his own adventure. However for reasons unknown, this game would not always make this fact clear for the fans.

The idea of adapting Le Tour de Gaule d’Astérix into a video game was apparently a well recieved premise. Just a few months earlier another game had been released on Phillips CD-i with that storyline as its backbone, and now this game would do the exact same. Due to not being able to defeat the Gauls, César has decided to build a palisade around the little village in order to keep them locked in and unable to interfere with his invasion. Astérix and Obélix are not intimidated by this and decide to play César for a fool by breaking free from the barricade, traveling to all the occupied countries and find one souvenir. When they have collected them all, they will send all the items to César as a gift to show that they traveled all over his empire without any problem. While the CD-i opted for a mediocre board game to get this story across, Astérix & Obélix goes back to a sidescrolling platformer with lots of action. 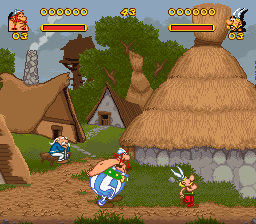 Development duties were given to Bit-Managers, who had already been responsible for the NES and Game Boy versions of 1993s Astérix. Bit-Managers had a good track record on Game Boy where most of their games would see a release, but Astérix & Obélix would be their only effort on the SNES. It’s a rather long game with 27 levels and 16 mini-games of many kinds, though most of them rely on the same mechanics used in-game. The progress of the game is what had been established with the majority of the earlier Astérix games, a voyage through many countries with different environmental hazards appropriate for its climate. The game allows for 2 players simultaneously, a first for a console Astérix and a sorely missed feature since the arcade game. The only major difference between them is the size and speed of their movement and attacks, but none of them have any individual skills. Many refer to this game as a port of the arcade game but other than co-op gameplay it bears little resemblance and do not have any connection outside of being of the same license. Sadly, despite offering a real 2 player mode and some impressive graphics for SNES, it’s a quite bumpy ride getting to Rome. The controls have some delay to them, which makes the fighting tedious, and it continues the strange tradition of making the heroes uppercut straight up, limiting your reach significantly. Worse yet is that the majority of enemies you meet can attack you from a distance while you have to be right by the side of them, leading you to take first damage most of the time. Obélix also controls so slowly that despite being the default choice, there very little reason to play as him. 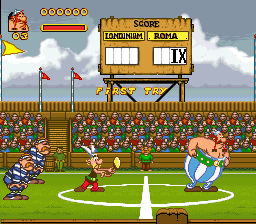 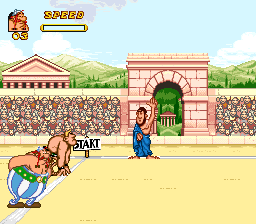 Items and points are scattered around the stages in true platforming fashion. You can pick up stars for points, and depending of your choice of character, you can also obtain a magic potion/roasted boar for temporary star power. What sets this game apart from the others is the high number of bonus stages you will encounter. After almost every other level or so, there will be some kind of bonus stage such as playing rugby or running in the Olympic games. While it offers a much needed breather from the standard action found in the game, they all base themselves on the same mechanics you already use on the normal stages for the most part. A few of them require some button mashing and other styles of control, but for the most part it’s all about jumping and punching which makes it more of the same. It’s not horribly executed, and to its credit most these stages work well, but they just don’t offer enough to keep the game from feeling a bit redundant if you’ve already played any other platformer.

Alberto González returned to the franchise to score this game, and it would also be his first (and only) soundtrack on SNES. While quite enjoyable, it is much more subdued than his earlier works on NES and Game Boy.

The strangest part is the naming of the game, Astérix & Obélix. Sure both characters are featured and indeed you can play as both, but the game was marketed and clearly shows a favoritism towards Obélix. By default you start as him, the intro shows him goofing around and his logo is three times the size of Astérix’s logo on the packaging and even in the game itself. It gets even more puzzling as all the ports and releases that game after the initial SNES and PC versions are named just simply Obélix in-game, but the packaging still reads Astérix & Obélix. This might have been done because of sales concern by just marketing Obélix but especially in the case of the portable version, it gets confusing why the titles differ. 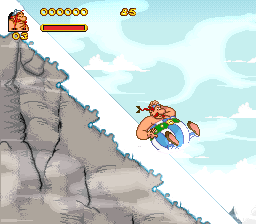 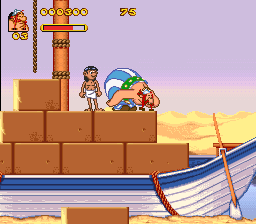 The Game Boy version also offers the most interesting challenge and gameplay out of all the versions released of Astérix & Obélix. While there was a PC port released, it merely increased the resolution while being a straight port of the SNES game. The Game Boy game is completely different. As mentioned, the packaging refers to this game under the SNES title, but once you boot up the game it will only read Obélix. You can choose to control Astérix, but he’s not the intended hero of this title. This was actually the lead version developed with SNES following, though depending on where you lived, it was released later than the SNES version. The SNES version does feel a bit rushed, and it might be because the decision to make a 16-bit version was made a bit late in development, though at this point it’s only an educated guess. The Game Boy game feels much more polished and features some fluid controls, great graphics and another excellent soundtrack by Gonzales who clearly pushed a lot more out of the Game Boy than he did with the SNES. While the story and levels are the same, the layouts are completely different and only share aesthetic similarities. A number of the bonus stages are included too, though they are fewer and further apart. It was also one of the Game Boy games that seriously benefited from the Super Game Boy as it would give you a nice banner and make the stage objects more distinguishable. The game would also see a re-release in 1999 on the Game Boy Color, while the SNES version would be released on the Game Boy Advance as part of the 2-pack Astérix & Obélix Bash Them All. The GBA version has brighter colors and is made easier as every Roman now only takes one hit to dispose of, while the rest of the game remains the same as its SNES parent. This game would also feature the the box trade-in promotion at Parc Astérix.

Astérix and the Power of Gods
Night mode