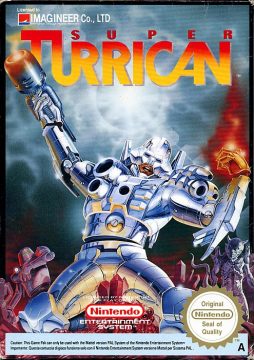 With Turrican 3 initially developed for Sega Genesis, things started to change. Trenz was no longer involved with the series, as he used to prefer developing on 8-bit systems. His personal series’ testament is the great Super Turrican for NES, entirely made by him, an original blend of the best from Turrican I & II with several gameplay improvements. This game sadly never reached the US and remains widely unknown (no wonder, as by 1992 only a few diehard fans still cared about the NES), and is often confused either with the other “simple” ports of Turrican or with the SNES game that bears the same name. It’s a shame, because it is a unique Turrican game in its own right. 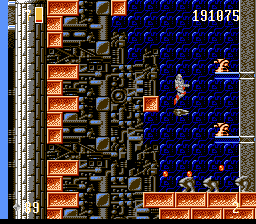 Several changes have been made to better balance the game: There are four difficulty levels available now, a feature unseen in the first two games. Turrican is now able to run faster by holding the fire button, and some ledges were adjusted in order to make use of this feature. The weapon systems consist of the standard repertoire: A spreadshot, a rebound gun and a laser, the latter of which also offers an autofire option while running. Energy wheel usage is limitless as in Turrican II, and the shield is no more time based, but built to resist a certain amount of hits. The Power Lines, on the other hand, work very differently: Upon pressing the select button, a singe stock is used, but the next couple fire button presses are turned into “power lines,” with the individual attacks much weaker than usual.

The immense stage layout was kept faithful in its complexity; the first three stages are practically a remix of the first game, then follows the tower stage from the Amiga version Turrican II, whereas the last stage is entirely new. The annoying time limit is gone, so it’s finally possible to explore them freely. Some of the most famous bosses in the saga make a return here, such as the Gauntlet and the Monolith, and there’s also a new one. Many others, however, are sadly missing, such as the giant piranha or the queen mother alien. Thankfully, the final boss this time isn’t that not-so-charismatic MORGUL, but The Machine himself, in what is probably his better-looking incarnation (although the sprite is shamelessly ripped off from Aldynes). 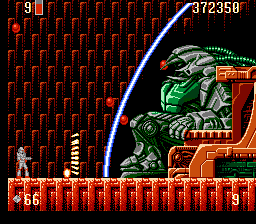 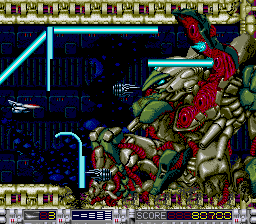 On the technical side, Super Turrican is very well made for an NES game. It’s fast and furious and there’s no slowdown or flicker, despite huge numbers of sprites. The game doesn’t look as great as the C64 original did on its platform (only the vertically scrolling stage retains parallax effects, for example), but it’s still one of the visually more impressive NES games. The music includes both new tracks and rearrangements of classic tunes. It’s neither the fault of the compositions nor the arrangements, but the NES sound chip makes them sound kinda bad, unfortunately. It can also be turned off in the options menu. 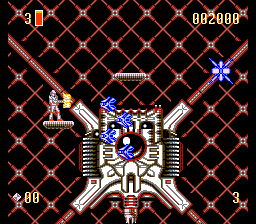 Most incredibly, however, all what is seen, heard and played here is made by one single person: Manfred Trenz himself. As the game credits go:

Trenz made quite a lot of adjustments and came up with one of the most balanced episodes in the saga, except for one terrible flaw: Dying even once means having to start at the beginning of a stage all over again, there are no checkpoints. This should have been ultimately prohibitive, given the size of the areas. That flaw alone makes it one of the hardest games in the series, no matter which difficulty level is chosen. Regardless, Super Turrican is one of the best action games on the NES, and possibly the best made outside of Japan.