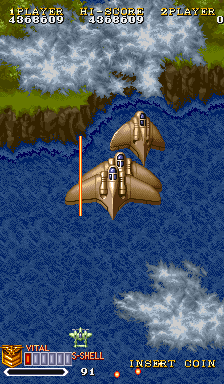 1941 is a giant leap forward from the previous two games, fixing many of the problems of 1943 and by extension, 1942. Now that the game takes place in Europe, you fly over actual scenery. All of the levels are very evocative and take full advantage of the setting, such as ruined cities during the blitz, or secret enemy missile silos. It’s also  the shortest game in the series, sporting six levels, which is completely normal for most shooters, but brief compared to the earlier games. Many of the stages actually take place indoors, and include walls. Fortunately, crashing into walls does not kill you, but just makes you spin out of control, which can be annoying but strangely useful, since this lets you shoot enemies approaching from the rear. The sound is also greatly improved. 1941 has some of the catchiest music in the series and never reuses anything. Despite staticy synth typical of CPS1 games, most of them are fast, upbeat, and accompany the frantic action very well. 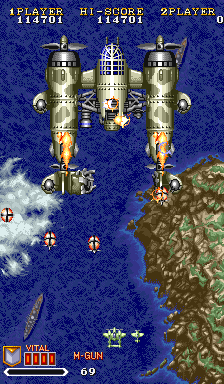 With the longer and more involves stages come gigantic bosses. Most of them are large war machines covered in turrets such as a huge battleship or gigantic planes. There are some more original fights, though. One particularly memorable boss is at the end of level three, a rocket carrying enough explosives to carpet bomb an entire city. If you can stop it, the rocket detonates over a forest, hopefully not doing too much damage. Another one of the more memorable parts is the final boss, a clearly alien spacecraft that breaks out of the remains of a previous boss. It even uses strange attacks that are never seen before in the game and flies much differently from anything else. It’s also remarkably fast and can dodge your shots, making it a very formidable adversary.

1941 also adds a couple of new weapons, such as the powerful shadow. Most levels open with a gold power up, which shifts between the options and the shadow. The options have changed a bit and are still powerful, yet breakable small planes that fly alongside you. The shadow stays with you for the rest of the level, giving you three shadow images of your ship that follow you wherever you go. It’s a pretty cool power up, similar in function to those in Ninja Gaiden II, and is not seen in any other game in the series. The other new addition is a charge shot, which becomes a series mainstay. 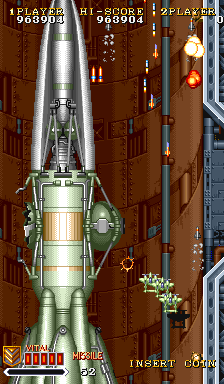 Even with all the improvements and changes, 1941 still plays like a 19XX game. Power ups are still temporary and obtained by blasting enemy formations and scoring still rewards you for defeating every enemy you ever see. For changing and improving so much without losing its distinct feel, 1941 is one of the greatest games in the series. Its greatness is be eclipsed by the next game, though.

1941 was ported to the SuperGrafx. It’s an excellent port, save for the colors looking a little bit washed out and the difficulty being a little bit lower. The screen is smaller than the arcade version, making everything feel a little bit more cramped, but it’s not bad enough to drastically affect the game. Otherwise, its only ports are part of the Capcom Classics Collection.

1941 is also believed to have introduced a long standing shooter tradition – whenever you continue, you get a single point added to your score. Since normally points are awarded as multiples of 10, it acts as a sort of mark of shame to indicate how many times you’ve stuck in an extra credit. 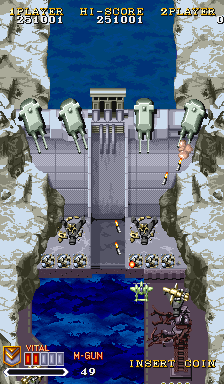