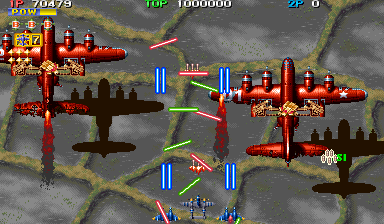 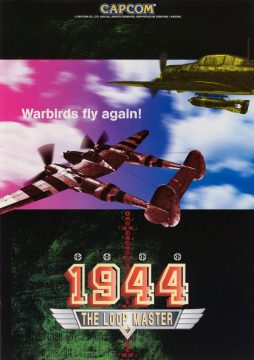 In the late ’90s, Capcom began a push to bring shooters back into the arcades. They contracted several well known developers as part of this campaign – Cave developed Progear, while Takumi developed both Giga Wing games, as well as Mars Matrix. In addition to Dimahoo (the third Mahou Daisakusen game), Raizing was also handed the keys to the 1942 series, making it the only title in the series not actually developed by Capcom. It not only feels different from the other games in the series, but is also a departure of sorts from Raizing’s other games. It’s also unique in that, like these other games, it uses a horizontally oriented 4:3 monitor, rather than the 3:4 vertically oriented monitor used in the other games in the series.

Unlike the many other shooters out at the time, this game is strictly old school. The scoring system is simple, there are no bullet curtains, no microscopic hit boxes, and no super secret final bosses. When compared to the other shooters out at the time, 1944 is actually pretty easy. In many ways, it is a step backwards from 19XX, a sort of return to the series roots. 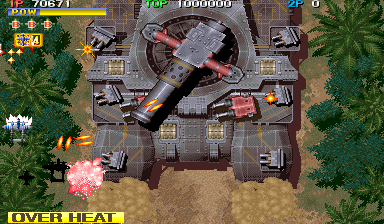 The very first thing 1944 does is bring the setting back to World War II. Each level has a mission name, usually something goofy and melodramatic, like Iron Beast Warcry, Nightmare Valley, or Oil Legion. Keeping in line with 1941, the settings are always changing. There are fifteen levels in total, and they are creative enough to never get repetitive. A couple of bosses get recycled, but it is not nearly as bad about it as some of the earlier entries in the series. Levels are generally short and bosses are huge, but do not take much effort to destroy. They have a habit of running away if you take more than a few minutes, which hurts your score.

The scoring system adds one new element, large golden diamonds. Collecting the large golden diamonds gets you bonus points. If you can collect ten, you get options, which as mentioned before, are very useful. Otherwise, you still get graded for accuracy and how many enemies you shoot down. Strangely, the rank system from some of the previous games is gone. This is especially odd from a game that Raizing was involved with.

There are no longer multiple planes to fly. You are back to playing as Super Ace, but there are a few new tricks added in. The charge shot is the best it’s ever been, turning you invincible for a short time and flying high above the battlefield to rain molten hot lead on everyone below. This charge shot is so powerful that Capcom had to make your engine overheat after use as an excuse to prevent you from using it all the time.

The health bar also returns, which is far more forgiving than 19XX‘s standard “one hit and you die” system. Bomb stock is kept from the last game too, so you no longer take damage from using a bomb. You also loop whenever a bomb is used, adding an element of strategy to bombing and making you temporarily invincible. Another nice touch is that when the health bar is low, the plane catches on fire. This also applies to options, which can actually take a few hits before going down this time. 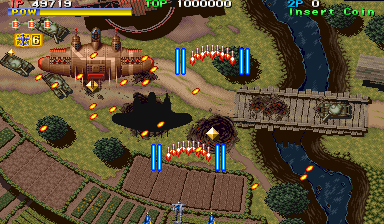 1944 also has some mighty impressive graphical effects. When your plane explodes, a little pilot ejects and activiates his parachute. If you put another credit in, you control another ship, which swoops into play. If can catch the pilot, you get rewarded with bonus points, bombs, and shot upgrades.

19XX: The War Against Destiny